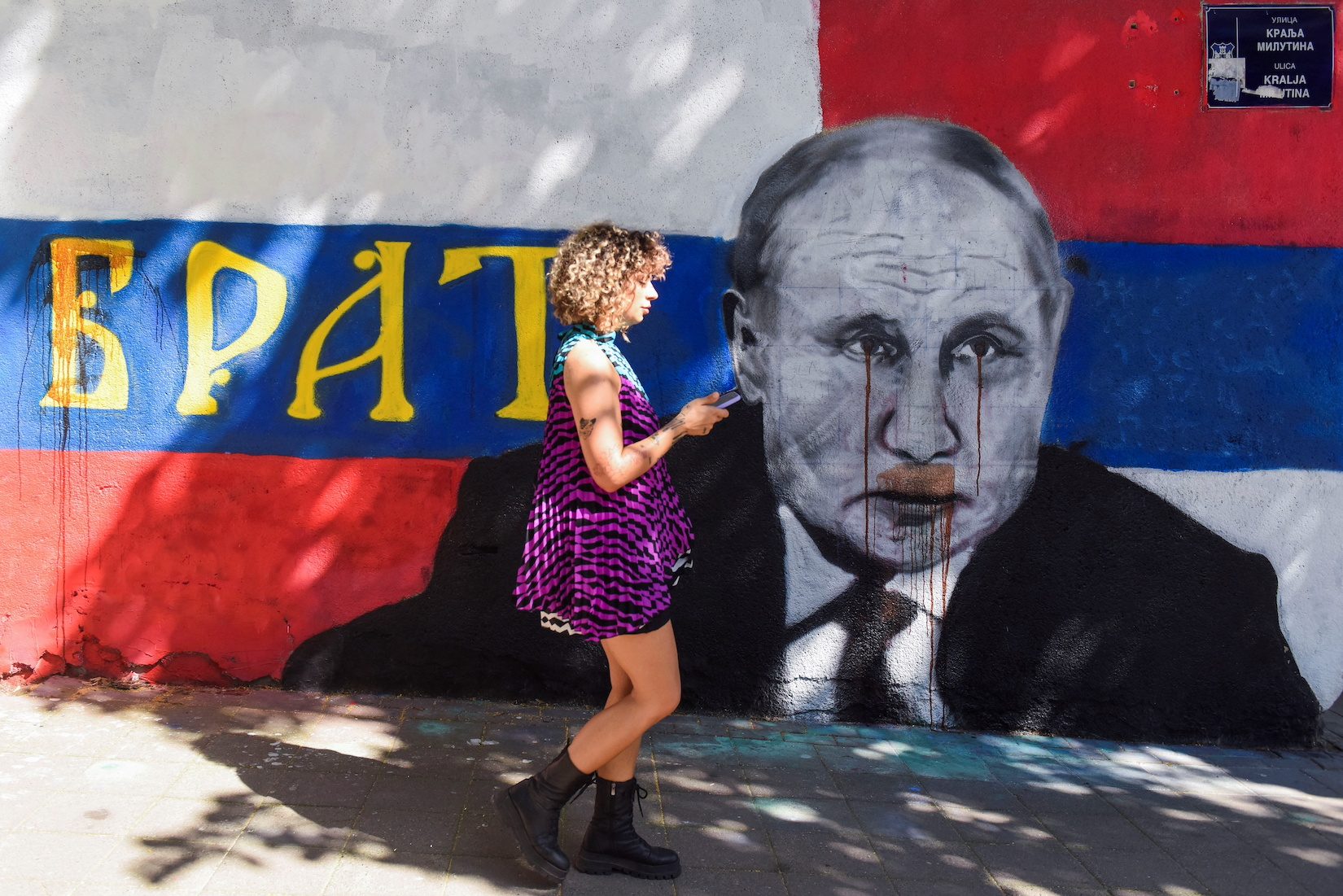 A woman walks next to a mural of Russian President Vladimir Putin with the word 'Brother' written on it, which has been vandalised with red spray paint, following Russia's invasion of Ukraine, in Belgrade, Serbia, June 20, 2022. REUTERS/Zorana Jevtic

Facebook Twitter Copy URL
Copied
In May research from NSPM, a Belgrade-based conservative think-tank, suggested that 82.1% of Serbians opposed sanctions against Russia

BELGRADE, Serbia – Each week about a dozen Russian, Ukrainian and Belarusian expatriates opposed to Russia’s invasion of Ukraine meet local Serbs in a Belgrade cafe to discuss the war and plan protest rallies.

Serbia’s open borders to Russia have made the Balkan country a destination for thousands of Russians, including some fleeing sanctions or conscription and others opposed to the government in Moscow. Thousands of Ukrainians fleeing the war also arrived.

Peter Nikitin, founder the Facebook group “Russians, Ukrainians, Belarusians and Serbs Together Against War”, says it started spontaneously on the day Russia invaded on February 24.

“We went to the Russian embassy to protest and there we met a few other Ukrainians, Russians and Belarusians and … the same day we started this Facebook group,” said Nikitin, 41, a Muscovite and an interpreter who came to Belgrade six years ago. The group has so far staged around a dozen actions, ranging from rallies that attracted hundreds of people to smaller protests with just a handful of activists.

In Serbia, they are in the minority.

Most Serbs see Russia, a fellow Orthodox Christian and Slavic nation, as an important military and trade partner.

In May research from NSPM, a Belgrade-based conservative think-tank, suggested that 82.1% of Serbians opposed sanctions against Russia. It also said that 68.7% of respondents believed NATO, which bombed Serbia during the war in Kosovo in 1999, was chiefly responsible for the outbreak of war in Ukraine.

‘You don’t get arrested’

Since the invasion, several rallies in support of Russia have attracted thousands of supporters, including many from ultranationalist organizations, some waving Russian flags or wearing t-shirts with the pro-Russian “Z” logo.

The “Z” symbol has also appeared in graffiti on walls in the Serbian capital, though a mural featuring Russian President Vladimir Putin and the word “brother” has since be defaced with red spray paint.

Although Serbia condemned the invasion of Ukraine at the United Nations, its conservative government has so far refused to impose sanctions against Russia.

But Nikitin said that despite pro-Russian sentiment and threats in social media, the Serbian authorities have allowed the group to demonstrate, unlike in Russia and its ally Belarus, where there have been clampdowns on dissent. “You don’t get beaten up and arrested five minutes after you show up on the street, in fact the police in Belgrade are very professional … they’ve been doing a great job protecting us and preventing various provocations,” he said.

Sasha Seregina, 33, from Russia’s eastern city of Samara who administers group’s Facebook page, said its Ukrainian members were very supportive, but that the real reconciliation between the two nations would be a difficult process.

“This is very important not only for our movement but also for the future and for some potential reconciliation.” – Rappler.com