ANOTHER TERM? Scottish First Minister Nicola Sturgeon gestures as she visits a counting centre as votes are counted for the Scottish Parliamentary election, in Glasgow, Scotland, Britain, May 7, 2021.

The Scottish National Party (SNP), which has vowed to hold an independence referendum that could tear the United Kingdom apart should it be returned to power, will find out on Saturday, May 8, if it has won a majority in Scotland’s parliament.

The SNP says it will seek to hold a new vote on secession if a pro-independence majority is returned to the devolved 129-seat parliament. This would set up a clash with British Prime Minister Boris Johnson, who says he will refuse any such vote because Scots backed staying in the United Kingdom in 2014. 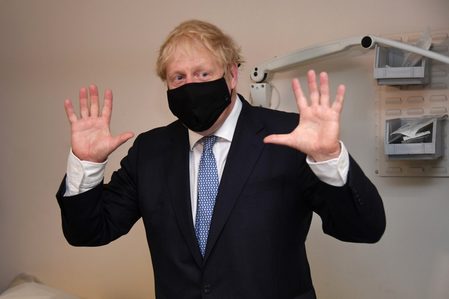 Initial results showed the SNP on course for a fourth consecutive term in office having triumphed in 40 of 49 seats declared so far, including in 3 key battlegrounds.

But some areas saw an increase in support for opposition pro-union parties, indicating the final outcome would be very close. The final results will be announced later on Saturday.

The electoral system – which allocates some seats on a proportional representation basis which helps smaller parties – might see the SNP fail to win an outright majority, something First Minister Nicola Sturgeon, the party leader, acknowledged.

“I have never taken that [an outright majority] for granted and it has always been on a knife edge,” she said.

There is likely still to be a pro-independence majority even if the SNP fall short because of the Green Party, which also supports secession. But supporters of the union argue that without an SNP majority, there is no mandate for a referendum.

Scottish politics has been diverging from other parts of the United Kingdom for some time, but Scots remain divided over holding another polarizing vote on whether to end their country’s 314-year union with England and Wales.

Britain’s exit from the European Union – a move opposed by a majority of Scots – as well as a perception that Sturgeon’s government has handled the COVID-19 crisis well and antipathy to Johnson’s Conservative government in London, have all bolstered support for Scotland’s independence movement.

Scots voted by 55% to 45% in 2014 to remain part of the United Kingdom, and Johnson says that was a “once in a generation” vote. Polls suggest the outcome of a second referendum would be too tight to call.

The British government says Johnson must approve any vote for it to be legal and he has made clear no such approval would be forthcoming.

“I think a referendum in the current context is irresponsible and reckless,” he told the Daily Telegraph newspaper.

Sturgeon herself has ruled out holding any vote until after the COVID-19 pandemic, with the SNP indicating it would be held by the end of 2023. She argues there would be no moral or democratic justification for Johnson to refuse a referendum if the Scottish parliament passes a bill to hold a vote.

“I think Boris Johnson doesn’t want a referendum because he knows he’s going to lose.”

With Sturgeon ruling out holding an illegal or wildcat plebiscite, it is likely that the issue will ultimately be decided by Britain’s top court. – Rappler.com