Can Belarus’ Lukashenko get away with the arrest of a dissident journalist? 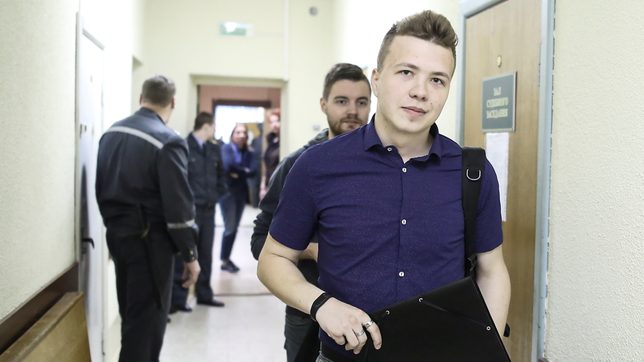 Opposition blogger and activist Roman Protasevich, who is accused of participating in an unsanctioned protest at the Kuropaty preserve, arrives for a court hearing in Minsk, Belarus April 10, 2017. Picture taken April 10, 2017.

Facebook Twitter Copy URL
Copied
European and US leaders need to establish moral clarity and take decisive action. But history and Kremlin tactics could undermine both.
As published byCoda Story

For European leaders, the week began with a tough challenge: how to address a new crisis of “state terrorism” caused by a dictator next door.

The Ryanair flight was carrying 122 passengers from Athens to Vilnius, Lithuania, when it was forced to make an emergency landing in Minsk, the capital of Belarus. Witnesses say no one panicked, except for one young man, who grabbed his head and “began shaking.”

It is chilling to imagine what went through the mind of 26-year-old Protasevich when he realized that the plane that was supposed to carry him from the safety of one European country to another was, instead, taking him straight to the nation where he stands accused of terrorism — a crime punishable by death in Belarus.

Protasevich is the founder and former editor of Nexta and Nexta Live, two Telegram channels that played an important role in broadcasting huge opposition protests against the Lukashenko regime. As the president cracked down on the demonstrations with increasing brutality, Protasevich continued his work from the presumed safety of exile in Europe.

Belarusian state media reported that Lukashenko himself ordered that the plane carrying Protasevich be stopped, so that he could be apprehended. It appears that the country’s authorities used a fake bomb threat and sent a fighter jet to intercept the plane and force it down.

After seven hours grounded in Minsk, the rest of the passengers were allowed to reboard and fly to Vilnius. They watched as Protasevich was taken away. “I will be executed,” were his last words to one of them. US Ambassador to Belarus Julie Fischer has described the situation as “dangerous and abhorrent,” while European officials have slammed the Belarusian authorities and threatened “serious consequences.”  It is clear that Lukashenko’s decision to completely abandon international norms has created a new reality for hundreds of dissidents around the world, for whom even crossing the airspace of their countries could now pose a grave threat.

What lessons other authoritarian leaders will draw from this episode depends on whether Lukashenko is allowed to get away with it.  And Russia appears to be playing a key role in making sure that he does.

Russia has an uneasy relationship with Belarus, but over the past year, as both governments have faced waves of popular protest, the two nations have stuck by each other. Protasevich’s arrest, which placed 122 other passengers at risk, immediately raised questions about Moscow’s possible involvement.

The question is important: if Lukashenko acted alone, the arrest of Protasevich could be a sign of desperation. If he acted with Moscow’s blessing, or even support, then this could be a much more serious geopolitical provocation, designed to test the willingness of the West to stand up to Russia ahead of the planned, though not yet scheduled, Putin-Biden summit.

Russian journalists are investigating a theory that Russian operatives followed Protasevich in Athens, were on the plane and helped to carry out the operation. But there is a simpler, yet insightful barometer of the Kremlin’s thinking: its own messaging.

When things don’t go according to the Kremlin’s plans, Russian media tends to go quiet. Over the past five years, international scandals involving the Russian government – be they hacking revelations, the poisoning of opponents or the downing of Malaysia Airlines Flight MH17 – have been characterized by an almost trademark few days of silence, during which the nation’s propaganda machine takes a deep breath to formulate its response, and only then launches into a full offensive.

But, this time, while European and US politicians voiced their outrage and talked about new sanctions against Lukashenko, Russian state television was immediately on the case, spinning the narrative in the opposite direction.

Kiselyov set the tone with two main messages about Protasevich’s arrest: first, that the West’s reaction revealed its hypocrisy, particularly in the case of the European Union; second, that there was nothing unusual about what Lukashenko did.

“The Americans arrest anyone they don’t like, anywhere they want,” Kiselyov said, bringing up a gallery of images of Russians who have been detained around the world. At the top of the list was Victor Bout, a notorious Russian arms dealer arrested in Thailand and extradited  to the United States in 2010, where he was convicted on several charges, including weapons trafficking and conspiracy to kill US citizens and officials.

Kiselyov’s second argument was based entirely on the 2013 case of Evo Morales, president of Bolivia, whose jet was forced to land in Austria after several European countries — pressured by the US — closed their airspace to the plane, which was taking Morales home after a summit in Moscow, following a tip-off that Edward Snowden was on board.

The story resonated. Within minutes, Twitter lit up with variations on the argument. From trolls to Russian diplomats around the world, a link to the Morales incident was ready to undermine every disapproving tweet about Protasevich.

The message quickly spread beyond the Russian bubble. “Why does the West pretend to be outraged when a nation imitates its gangsterism like the air piracy Belarus engaged in? Belarus didn’t forget when the US forced the plane of a head of state, Evo Morales, to land in order to arrest Edward Snowden & got away with it.” tweeted American activist Ajamu Baraka to his 90,000 followers, echoing the thoughts of a number of other influencers.

Russia uses this kind of whataboutery because it has worked ever since the Cold War. In the words of Peter Pomeranzev, one of the world’s leading disinformation experts, the Kremlin exploits systemic weak spots and inconsistencies in the Western system by “providing a sort of X-ray of the underbelly of liberal democracy.”

The Morales example, is in fact, pertinent, and there would be nothing wrong with pointing out the West’s double standards, were doing so not based on the assumption that two wrongs somehow make a right. Meanwhile, the West has remained tight-lipped regarding its own mistakes.

Without an appropriate response from the West, the Kremlin is able to use this reliable and familiar strategy to muddy narratives, dampen outrage and plant seeds of doubt. As leaders in the West scramble over the penalties they want to impose on Belarus, Russia’s line is already making moral clarity and decisive action just a bit more elusive and Protasevich’s story easier to shrug off. – Rappler.com