Facebook Twitter Copy URL
Copied
By a margin of 4 to 1, the Saint Nicholas parish in Kyiv voted to join a majority of the country's parishes in quitting the Moscow Patriarchate and joining the independent Ukrainian Orthodox Church

IRPIN, Ukraine – For years a vocal minority at Saint Nicholas’ parish in the middle-class Kyiv commuter town of Irpin resisted calls to split from their spiritual fathers in Moscow.

A millennium of sacred ties between Russia and Ukraine, they argued, should be above politics.

But after three weeks of Russian military occupation that left the church building pockmarked with shrapnel, the parish van pulverized by a mortar and a bullet hole through the eye of an icon, parishioners decided that enough was enough.

By a margin of 4 to 1, they voted in May to join a majority of the country’s parishes in quitting the Moscow Patriarchate and joining the independent Ukrainian Orthodox Church, parish priest Andriy Klyushev said. 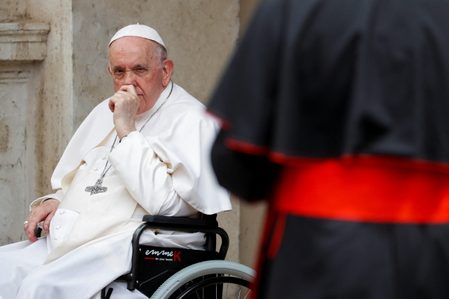 Klyushev, a tall, dark-haired Odesa native who has always considered Russian his first language, said he knew the second he heard the Russian attack on a nearby airfield on the morning of February 24 that the painful split could no longer be avoided.

“It was one of the first thoughts that came to me. That’s it. Where do we go from here,” he said.

The emotional split, he said, “will be forever”.

The rupture between the Ukrainian and Russian Orthodox Churches that both trace their foundation to the baptism in 998 of the Kyivan Rus Prince Volodymyr – Vladimir for Russians – has widened to a chasm since Russia’s annexation of Crimea from Ukraine in 2014.

By 2019 after years of increasing anti-Russian sentiment, Ukraine formed a church independent of Moscow after receiving permission from the spiritual leader of the world’s Orthodox Christians, Istanbul-based Patriarch Bartholomew.

Since Russia’s February 24 invasion, which Moscow calls a “special military operation”, that process has accelerated significantly, with more than 400 parishes leaving the Ukrainian Orthodox Church-Moscow Patriarchate to join the Ukrainian Church.

Many Ukrainian Orthodox believers have been repulsed by the support shown by Russian Patriarch Kirill, first in 2014 and then in 2022, for President Vladimir Putin’s actions in their country.

Kirill has thrown his weight behind Putin’s military campaign, calling on believers to unite “around the authorities” and accusing “external forces” of rising up against the Russian lands.

Pope Francis has described Kirill as the Kremlin’s “altar boy”, a comment criticized by the Moscow Patriarchate as using the “incorrect tone”.

Kirill has cited the persecution of Russian speakers, including in the port city of Odesa to justify his stance on Ukraine. Ukraine denies any such persecution.

When Klyushev returned to Irpin following the Russian withdrawal at the end of March, he found a church pockmarked with shrapnel and bullet holes, including one through the eye of Saint Nicholas in an icon over the front door.

The engine of the parish minivan parked by Klyushev’s house was a mangled wreck after taking a direct hit from a mortar. He said a volunteer helping with evacuations was shot in his car yards from the church.

Ukraine says it is investigating allegations of rape, torture and other suspected war crimes by Russian forces in the town that had a pre-war population of 62,000. Moscow denies war crimes allegations.

While there is little if any open support in most of Ukraine for Kirill’s stance on the war, there still remains a significant minority of Orthodox believers who are reluctant to split with Moscow. 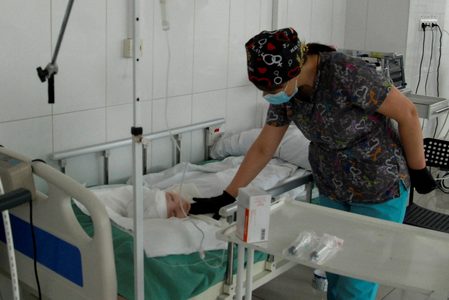 But services at its main Kyiv church have continued to bless Kirill, indicating that the split is not final, said Archpriest Andriy Dudchenko, a lecturer at the Kyiv Orthodox Theological Academy.

Those opposed to moves for Saint Nicholas’ parish to split from Moscow have gradually left the church ahead of the May vote, Klyushev said.

Some have gone to the more conservative parish of the Holy Trinity, a wooden church on carefully manicured grounds a 20 minute walk across town.

One of that parish’s priests, Sergiy Bobchenko, 49, said the decision by the council of Ukraine’s Moscow Patriarchate Church to assert independence from Moscow was taken by “young bishops” with an older generation voting to preserve unity.

“There is an ideology against Russia being implanted and the younger generation under 30 … the older generation, they are more conservative. They are trying to keep the peace between our Russian and Ukrainian peoples,” he said. – Rappler.com