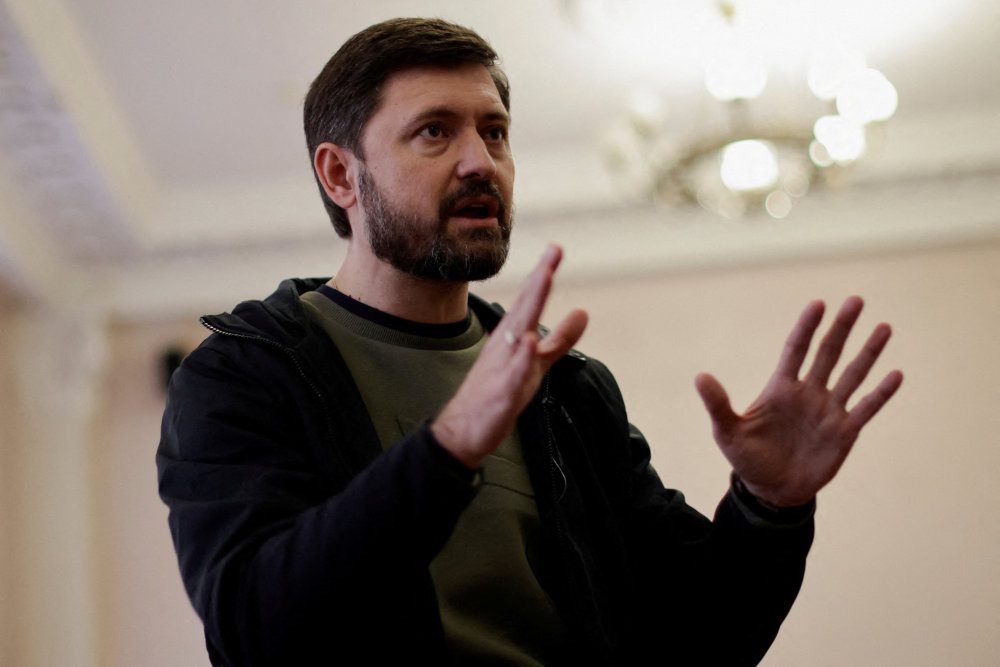 VADYM BOICHENKO. Mariupol Mayor Vadym Boichenko speaks during an interview with Reuters, amid Russia's invasion of Ukraine, at an undisclosed location in Ukraine, April 21, 2022.

Facebook Twitter Copy URL
Copied
'We need only one thing – the full evacuation of the population. About 100,000 people remain in Mariupol,' Mayor Vadym Boichenko says on national television

KYIV, Ukraine – The mayor of Mariupol made a new appeal on Friday, April 22, for the “full evacuation” of the southern Ukrainian city which President Vladimir Putin says is now controlled by Russian forces.

“We need only one thing – the full evacuation of the population. About 100,000 people remain in Mariupol,” Mayor Vadym Boichenko said on national television.

Boichenko, who is no longer in Mariupol, did not provide any update on any fighting in or around the city on the Sea of Azov. But he said, without giving details, that Russian forces’ “mockery” of those left in Mariupol continued.

Boichenko told Reuters in an interview on Thursday that Putin alone can decide the fate of the civilians still trapped in Mariupol.

Under heavy bombardment, citizens who did not flee during nearly two months of siege and fighting have suffered without electricity, heating or water.

Boichenko has said tens of thousands of residents have been killed. The figure cannot be verified. Russia denies targeting civilians.

Putin said on Thursday Russian troops had “liberated” Mariupol, which would make it the biggest city to fall into Russian hands since the start of what Moscow calls a “special military operation.”

But a contingent of Ukrainian fighters are still holding out in the underground bunkers of the Azovstal steel complex, alongside hundreds of civilians in desperate conditions, according to Ukrainian authorities.

A small convoy was able to leave the city on Wednesday, reaching the Ukraine-controlled city of Zaporizhzhia on Thursday.

Deputy Prime Minister Iryna Vereshchuk said separately that Ukraine was not attempting to establish any humanitarian corridors to evacuate civilians from Ukrainian cities and towns on Friday.

“Due to the danger on the routes today, April 22, there will be no humanitarian corridors,” she wrote on Facebook. “To all those waiting to be evacuated: be patient, please hold on!” – Rappler.com