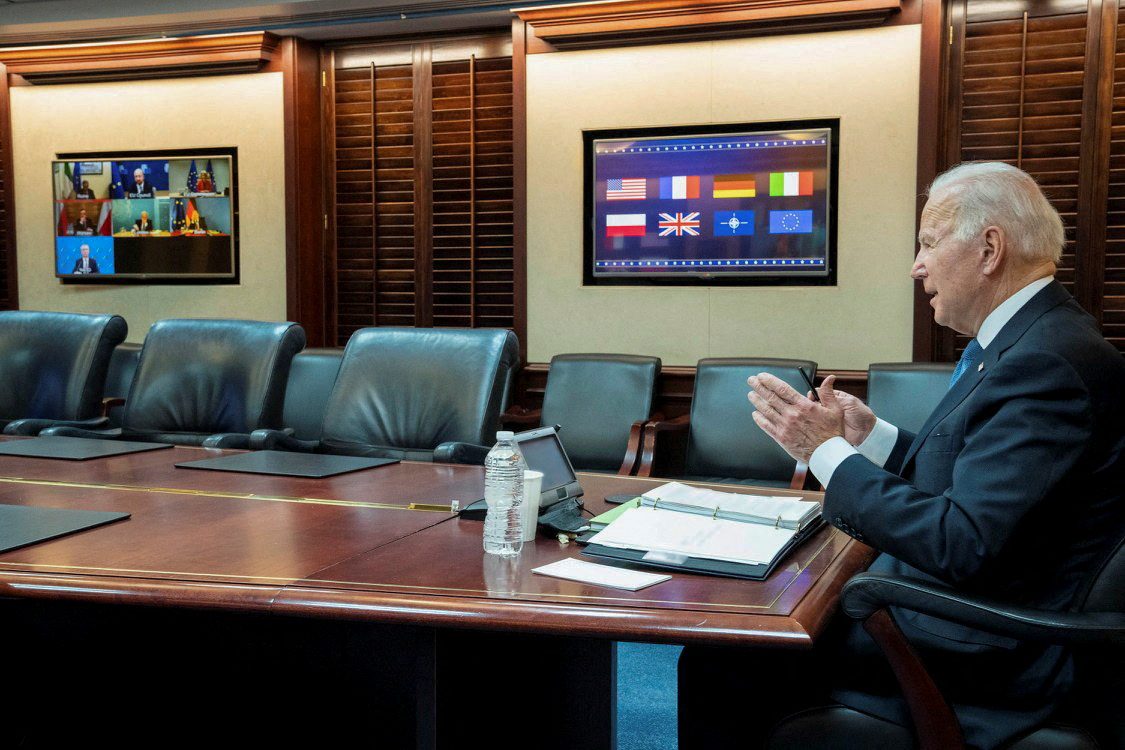 THE UKRAINE SITUATION. US President Joe Biden is seen in a White House handout photo as he speaks with European leaders about Russia and the situation in Ukraine during a secure video teleconference from the Situation Room of the White House in Washington, DC, USA, on January 24, 2022.

Facebook Twitter Copy URL
Copied
The US Department of Defense says about 8,500 American troops are on heightened alert and awaiting orders to deploy to the region, should Russia invade Ukraine

NATO said on Monday, January 24, it was putting forces on standby and reinforcing eastern Europe with more ships and fighter jets, in what Russia denounced as Western “hysteria” in response to its build-up of troops on the Ukraine border.

The US Department of Defense in Washington said about 8,500 American troops were put on heightened alert and were awaiting orders to deploy to the region, should Russia invade Ukraine.

Tensions are high after Russia massed an estimated 100,000 troops in reach of its neighbor’s border.

Russia denies planning an invasion. But having surrounded Ukraine with forces from the north, east and south, Moscow is now citing the Western response as evidence that Russia is the target, not the instigator, of aggression.

President Joe Biden, pushing for transatlantic unity, held an 80-minute secure video call with a number of European leaders on Monday from the White House Situation Room to discuss the Ukraine crisis, the White House said.

“We will always respond to any deterioration of our security environment, including through strengthening our collective defense,” Stoltenberg said in a statement.

He told a news conference that the enhanced presence on NATO’s eastern flank could include the deployment of additional battlegroups.

“We are considering also to have battlegroups… in the southeast of the alliance,” Stoltenberg said.

So far, NATO has about 4,000 troops in multinational battalions in Estonia, Lithuania, Latvia and Poland, backed by tanks, air defenses and intelligence and surveillance units.

US officials said the Pentagon was finalizing efforts to identify specific units that it could deploy to NATO’s eastern flank.

One of the officials said up to 5,000 could be deployed, while a NATO diplomat said Washington was considering gradually transferring some troops stationed in western Europe to eastern Europe in the coming weeks.

A Polish official said Warsaw would draw the line at sending troops to Ukraine.

As tensions grow, Britain said it was withdrawing some staff and dependents from its embassy in Ukraine, a day after the United States said it was ordering diplomats’ family members to leave. US diplomats are being allowed to leave voluntarily.

Kremlin spokesman Dmitry Peskov accused the West of “hysteria” and putting out information “laced with lies.”

“As for specific actions, we see statements by the North Atlantic Alliance about reinforcement, pulling forces and resources to the eastern flank. All this leads to the fact that tensions are growing,” he said.

Global stock markets skidded as the prospect of a Russian attack quashed demand for riskier assets such as bitcoin, and bolstered the dollar and oil. The ruble hit a 14-month low against the dollar, and Russian stocks and bonds tumbled.

Russia has used its troop build-up to draw the West into discussions after presenting demands to redraw Europe’s security map. It wants NATO never to admit Ukraine and to pull back troops and weapons from former Communist countries in eastern Europe that joined it after the Cold War.

Washington says those demands are non-starters but it is ready to discuss other ideas on arms control, missile deployments and confidence-building measures.

Russia is awaiting a written US response this week after talks last Friday – the fourth round this month – produced no breakthrough.

Asked whether he thought an invasion was imminent, British Prime Minister Boris Johnson told broadcasters that intelligence was “pretty gloomy on this point” but that “sense can still prevail.”

He repeated Western warnings that invading Ukraine would be “a painful, violent and bloody business” for Russia.

The United States and the European Union, wary of Russia’s intentions since it seized Crimea and backed separatists fighting government forces in eastern Ukraine in 2014, have told Russia it will face crippling penalties if it attacks again.

EU foreign ministers meeting in Brussels warned Russia it would face “massive” consequences, but are divided over how tough to be on Moscow and did not say what the consequences might be.

Ukrainian President Volodymyr Zelenskiy told EU President Charles Michel by phone that it was important for Kyiv that the EU showed unity.

“Ukraine will not fall for provocations, and together with its partners, will remain calm and restrained,” his office said.

A Russian delegation source said political advisers from Russia, Ukraine, France and Germany would meet in Paris on Wednesday for talks on resolving the conflict in eastern Ukraine, in which some 15,000 people have been killed since 2014. Previous efforts have failed to yield any breakthrough. – Rappler.com