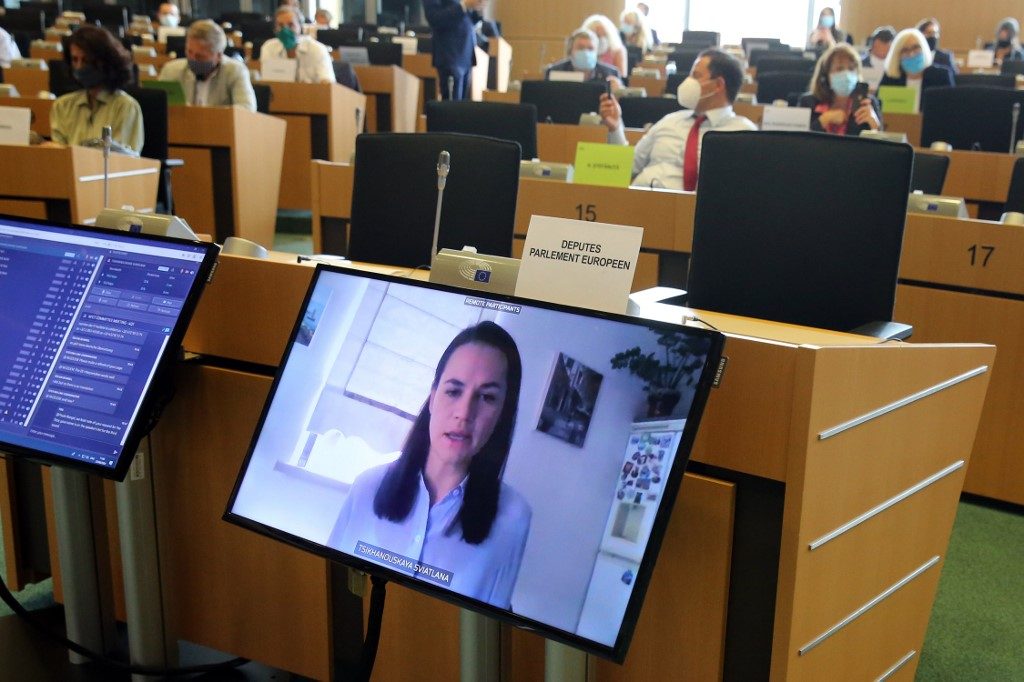 Members of the Committee on Foreign Affairs of the European Parliament attend a video-conference meeting with Belarusian opposition figurehead Svetlana Tikhanovskaya (on screen) on the political situation in Belarus at the European Parliament in Brussels on August 25, 2020. - Exiled opposition leader Svetlana Tikhanovskaya told the EU parliament on August 25, 2020, that a "peaceful revolution" was underway in Belarus after huge protests broke out over disputed presidential elections. "A peaceful revolution is taking place," Tikhanovskaya, 37, said via video link from Lithuania, adding that the mass demonstrations were not for or against either Russia or the European Union. (Photo by François WALSCHAERTS / AFP)

Facebook Twitter Copy URL
Copied
(UPDATED) 'Belarus has woken up. We are not the opposition anymore. We are a majority now. A peaceful revolution is taking place,' says Svetlana Tikhanovskaya

Belarusians have risen up in a “peaceful revolution,” their exiled opposition leader said Tuesday, August 25, as a 17-day mass protest movement calling for new elections showed no sign of yielding to an equally determined government crackdown.

Demonstrators have daily flooded the streets of the former Soviet country demanding the resignation of authoritarian leader Alexander Lukashenko since he claimed a sixth term in disputed elections on August 9. Rain did not prevent yet another rally from starting on Tuesday.

The 65-year-old president, often dubbed “Europe’s last dictator,” dispatched his security services to disperse protesters following his claim to have won 80% of the vote, in a response condemned by rights groups and EU leaders.

However, an initial violent crackdown has evolved into a widespread campaign to pressure critics and government workers into staying quiet and toeing the government line.

Leading opposition figure Svetlana Tikhanovskaya said in a speech to the European Parliament that the country was witnessing its largest demonstrations in recent history over police violence and the contested vote.

“Belarus has woken up. We are not the opposition anymore. We are a majority now. A peaceful revolution is taking place,” she said speaking in English via video link.

Tikhanovskaya fled to neighboring EU country Lithuania after claiming victory in the ballot that went ahead without independent observers and was rejected by European leaders for being neither free nor fair.

“Belarus is in turmoil and crisis,” Tikhanovskaya said. “Peaceful protesters are being illegally detained, imprisoned and beaten. This is taking place in the middle of Europe.”

Lukashenko has dismissed calls to stand down or hold new elections.

He referred to protesters as “rats” in an official video published on Sunday, August 23, showing him landing at his residence armed with an automatic rifle following a helicopter tour of the protest scene.

Several members of the opposition’s Coordination Council that is seeking new elections have been arrested or summoned for questioning after Lukashenko accused them of attempting to “seize power.”

Nobel Prize-winning writer and outspoken Lukashenko-critic Svetlana Alexievich was named a member of the presidium and has been called in for questioning as a witness by investigators on Wednesday, August 26.

On Tuesday, Pavel Latushko, a former diplomat now a member of the Council, was questioned as a witness in the probe for more than 3 hours, he said.

The opposition also reported this week that two presidium members were detained for organizing illegal strikes.

One of them, tractor plant worker Sergei Dylevsky was sentenced to 10 days in police detention on Tuesday for violating protest laws and ignoring police orders.

After downing their tools in large numbers, employees at state-owned enterprises – usually a bastion of loyal Lukashenko’s supporters – have continued to strike but on a smaller scale under pressure by the authorities to stay on their jobs, activists have said.

Dozens of teachers and their allies gathered outside the education ministry on Tuesday after Lukashenko said this week that those who participated in mass post-election protests should be fired and “must not be in schools.”

Tikhanovskaya, 37, who only lately developed political skills after training as an English teacher, drew huge crowds to campaign rallies ahead of the vote that she was allowed to contest after her husband was jailed and barred from running.

More than 100,000 people have flooded the streets of Minsk for two weekends in a row in historic protests against Lukashenko’s reelection.

The police said on Tuesday they had opened 3 criminal cases after thousands of demonstrators gathered on Independence Square in Minsk on Monday, August 24, for a 16th consecutive day of protests over the elections and police violence.

In a video in Belarusian posted later on Tuesday, Tikhanovskaya called for more anti-government protests in Minsk, while Lukashenko’s supporters also planned a demonstration in the capital.

A collection of rights organisations, including the Belarusian advocacy group Viasna, has called on the UN to investigate allegations of “widespread and systematic” torture in police custody.

The European Union has promised to impose sanctions on Belarusians responsible for allegedly fixing the vote and dispersing protesters. A senior European official said Tuesday as many as 20 could be targeted.

Tikhanovskaya said Tuesday the mass protest movement in Belarus was not for or against Russia or Europe, describing the demonstrations instead as a “democratic revolution.”

US Deputy Secretary of State Stephen Biegun met Tikhanovskaya in Lithuania this week and described her as a “very impressive person.”

After a meeting with Russian Foreign Minister Sergei Lavrov in Moscow on Tuesday, Biegun “condemned the use of violence against the Belarusian people.”

He “expressed support for Belarus’ sovereignty and the people’s right to self-determination,” the US embassy said.

Europe’s longest serving leader, Lukashenko has accused NATO troops of mobilizing in Poland and Lithuania next door and ordered his own military into high alert.

EU leaders have urged Russian President Vladimir Putin to advocate for dialogue between Lukashenko and the opposition, while the Kremlin has warned Europe against interfering. – Rappler.com