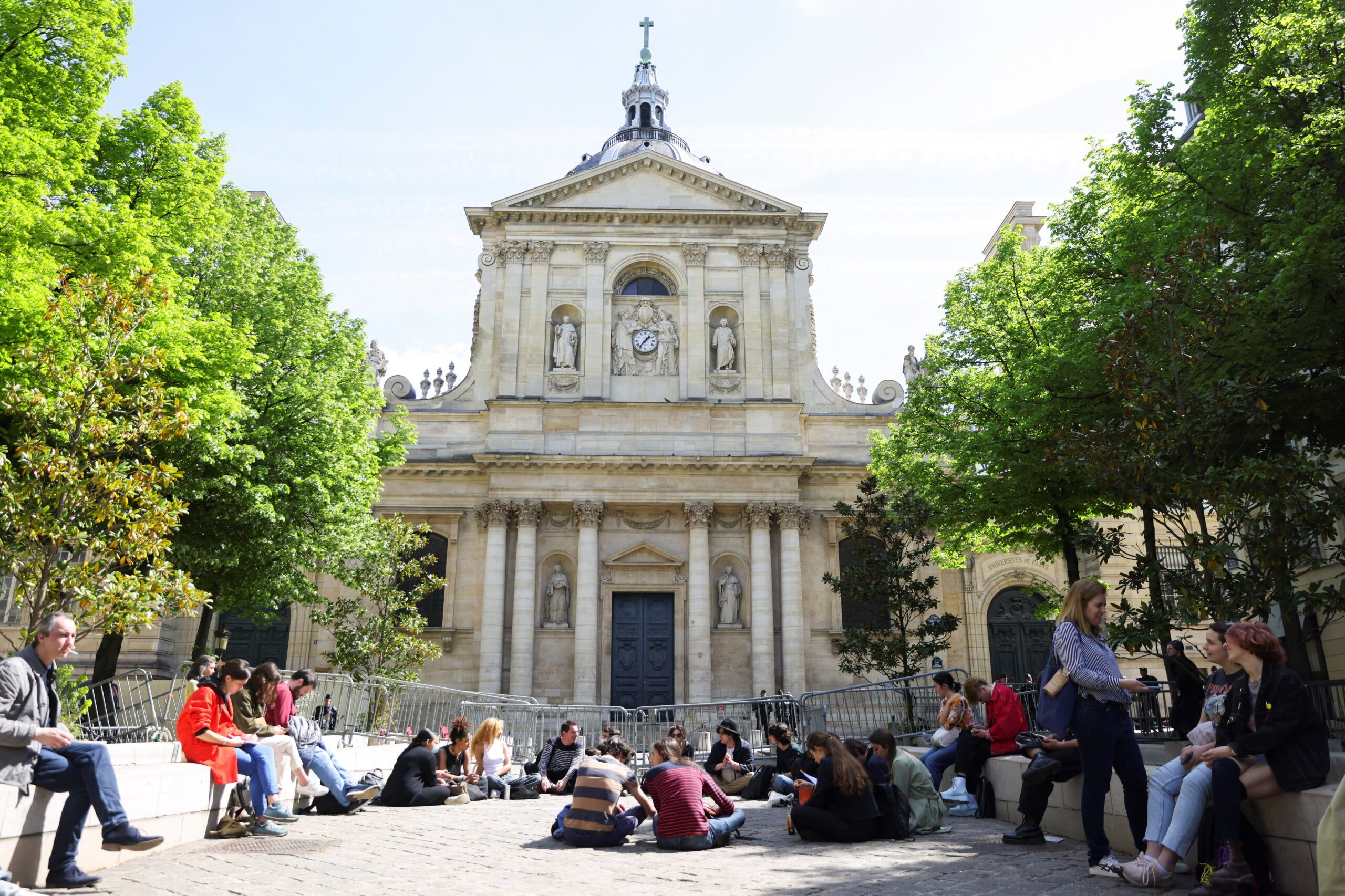 French students attend a demonstration in protest of the Macron-Le Pen duel in the second round of the 2022 French presidential election outside the Sorbonne University in Paris, France, April 15, 2022. REUTERS/Johanna Geron

Facebook Twitter Copy URL
Copied
'It's like choosing between the plague and cholera. We expect nothing from Macron but we're going to vote for him because it is out of the question that Marine Le Pen wins,' says a student

Now, though, with his favourite Jean-Luc Melenchon out, the 39-year-old does not plan to vote in the April 24 runoff. He finds both aspirants, incumbent President Emmanuel Macron and Marine Le Pen, daughter of Jean-Marie, distasteful.

“Macron and Le Pen share the same ideas,” Thiam said, between sparring with a young boxer at the Mohamed Ali gym in Bobigny, an ethnically-diverse northern suburb of Paris.

Melenchon won 60% of first round votes in Bobigny, which lies in France’s poorest administrative department Seine-Saint-Denis. Now his supporters in the Paris suburbs and beyond will be crucial to determining a tight-looking runoff.

Many, like Thiam, feel France has become increasingly Islamophobic as the Macron government has passed a raft of laws and measures that, it says, are to tackle religious extremism and preserve national secular values.

There are also perceptions that Macron is a “president of the rich,” aloof from the people, as he has adopted right-wing economic positions. That seems to be stopping another united front against the far right, as occurred in past votes, and may cause the lowest turnout in decades, polls show.

A Reuters analysis of first round results showed he struggled to garner support in low-income areas and will have a tough time reaching voters outside his base of educated, middle-class city dwellers.

Macron is, though, forecast to win by a narrow margin.

In a runoff between the same candidates in 2017, Macron won 79% of votes – above the national average of 66% – in Seine-Saint-Denis which voted overwhelmingly to keep Le Pen out.

Now, though, “Macron is polarizing in these areas because he is seen as being on the right and favouring the rich, while Le Pen is less scary than her father,” said Jean-Yves Dormagen, a professor at University of Montpellier.

“She has done everything to soften her discourse on the identity subject and so she seems reasonable and less racist.”

‘I look at my pockets’

Growing up, Sami Mahdjoub, who brings his son to box at Thiam’s gym, remembers how his parents would invoke Jean-Marie Le Pen to persuade him to behave well, saying: “work hard at school or you will get deported.”

Nowadays, the 38-year-old Franco-Algerian said he no longer viewed the Le Pen name as a threat.

“I don’t listen to what she says, I look at what’s left in my pockets, and with Macron I have nothing,” Mahdjoub said. “With Le Pen will it be better? I don’t know.”

Melenchon has told his supporters not to vote for the far-right, but has not endorsed Macron. His party is holding an online vote on its stance, with the result due on Saturday.

Sabine Rubin, a Melenchon lawmaker in Seine-Saint-Denis, said she understood reluctance to vote for Macron.

“They see public services disappear, their own purchasing power dropping … the abandonment of these neighbourhoods is not new but now there is disdain on top of that,” she said.

Rubin cited past remarks Macron had made, including comments to one jobless man that all he needed to do was “cross the road” and ask for work.

But for many, Le Pen and her far right Rassemblement National party remain unpalatable too.

Melenchon voter Emma D’Angelo, an unemployed graduate from Bondy, cried at the results of the first round and considered burning her electoral card. But she has come round to the idea of voting Macron.

“For students it’s like choosing between the plague and cholera. We expect nothing from him but we’re going to vote for him because it is out of the question that Marine Le Pen wins,” said D’Angelo, 22, who is applying for masters programs.

Carlos Tavares, another coach at the Mohamed Ali gym who described growing up in fear of Le Pen and far-right “skinheads,” said he was shocked friends may withhold their vote.

“To vote blank or to abstain, whose game are we playing? It’s Marine Le Pen we’re talking about. For me, it’s aberrant and scary,” he said. – Rappler.com