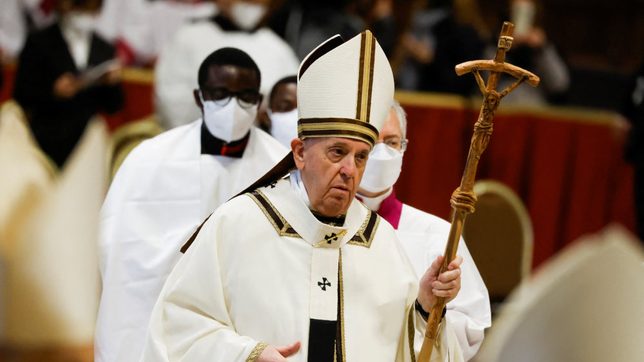 POPE FRANCIS. Pope Francis celebrates Mass for the Feast of Epiphany in Saint Peter's Basilica at the Vatican January 6, 2022.

Facebook Twitter Copy URL
Copied
Pope Francis seems to direct specific criticism at those who balked at his decision to restrict the traditionalist Latin Mass, saying the liturgy could not be trapped in a 'dead language'

VATICAN CITY – Pope Francis took an apparent dig at conservatives resisting change in the Roman Catholic Church on Thursday, January 6, lamenting those whose religion he said was self-referential and encased in a “suit of armor.”

On the Feast of the Epiphany, Francis seemed to direct specific criticism at those who have balked at his decision to restrict the traditionalist Latin Mass, saying the liturgy could not be trapped in a “dead language.”

“Have we been stuck all too long, nestled inside a conventional, external, and formal religiosity that no longer warms our hearts and changes our lives?,” Francis said.

“Do our words and our liturgies ignite in people’s hearts a desire to move towards God, or are they a ‘dead language’ that speaks only of itself and to itself?”

The Latin Mass went out of general use after the 1962-1965 Second Vatican Council and was substituted by local languages.

In July, having argued that the Latin Mass was being exploited by anti-reformists to harm the Church’s unity, Francis tightened regulations on when it could be celebrated, overturning decisions by his two predecessors.

Since then some conservatives, including bishops, have openly defied the pope, resulting in the latest chapter of what some have dubbed the Church’s “liturgy wars.”

Faith was not “a suit of armor that encases us; instead, it is a fascinating journey, a constant and restless movement, ever in search of God,” Francis said.

The pope made his comments in the homily at a Mass in St. Peter’s Basilica on the day Christians commemorate what the Bible says was the arrival of the three wise men, or magi, in Bethlehem following Jesus’ birth.

Participation was limited to about 1,500 people because of COVID-19 restrictions. – Rappler.com