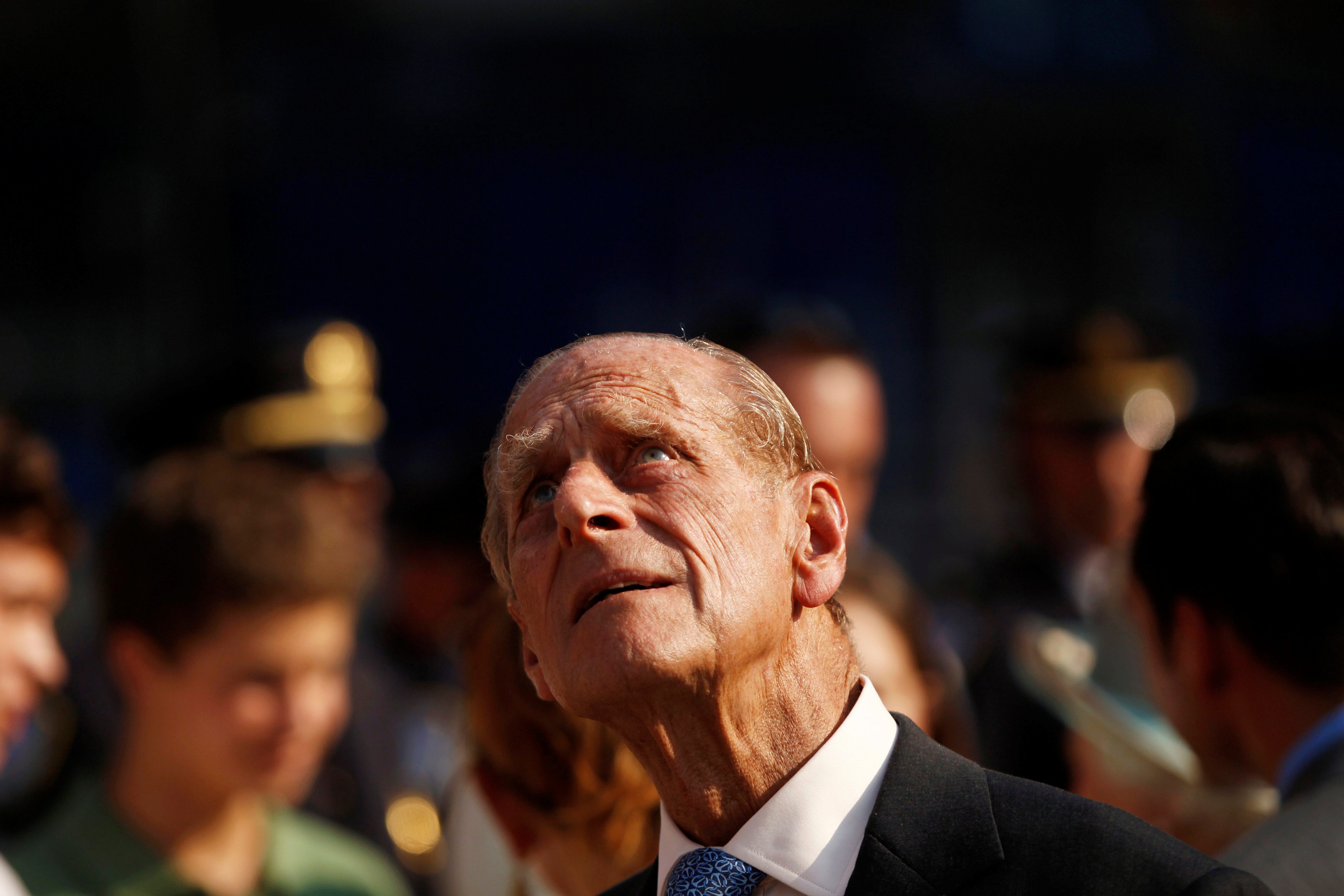 INFLUENTIAL. Prince Philip, Duke of Edinburgh looks up after Britain's Queen Elizabeth (not pictured) dedicated a wreath of flowers at the site of the September 11, 2001 World Trade Center attack during her visit to New York, on July 6, 2010.

Facebook Twitter Copy URL
Copied
Though he had no official role, Philip, the Duke of Edinburgh, was one of the most influential figures in the royal family for more than 70 years

A blunt-speaking naval officer who as Queen Elizabeth’s dutiful consort helped modernize the British monarchy, Prince Philip might be best remembered for his gruff public persona.

Outspoken and irascible, Philip lived in the shadow of the woman he married at Westminster Abbey in 1947 and always walked a step behind the queen at the thousands of ceremonial events they attended during her reign, the longest in British history.

Though he had no official role, Philip, the Duke of Edinburgh, was one of the most influential figures in the royal family for more than 70 years. He died aged 99 on Friday, April 9.

While Philip was often criticized for his demeanor and sometimes brusque remarks, friends said that as Queen Elizabeth II’s closest confidant he brought wit, impatient intelligence and unflagging energy to the monarchy.

“He has, quite simply, been my strength and stay all these years,” Elizabeth said in a rare personal tribute to Philip during a speech to mark their 50th wedding anniversary in 1997.

“I, and his whole family, and this and many other countries, owe him a debt greater than he would ever claim, or we shall ever know.”

If Philip harbored frustration at his life as consort, he never publicly showed it.

But in a tetchy interview with the BBC to mark his 90th birthday, he did reveal that in the early days he struggled to find a role for himself.

“There was no precedent. If I asked somebody ‘what do you expect me to do?’ they all looked blank – they had no idea, nobody had much idea,” he said.

Born in an age of deference to monarchy, Philip helped Elizabeth navigate the political and social upheaval of the 20th century to craft a monarchy fit for a different time.

Often facing a deeply traditional court, he reformed the palace and tried to harness the growing power of television to project royal influence.

He pushed for the queen’s coronation in 1953 to be televised live and behind the scenes removed outdated behavior in the palace he regarded as stuffy. He was the first royal to do a TV interview.

However, later in life Philip was criticized for impeding the monarchy’s ability to adapt to the times, and detractors partly blamed his overbearing manner for his children’s failure to produce happy families.

For Elizabeth, Philip was a supportive husband who courtiers said was the only person to treat the monarch as a human being.

Despite rumors about his infidelity, the couple stayed together and in old age they clearly enjoyed an affection and regard for each other. They celebrated their 70th wedding anniversary in November 2017.

However Philip, the son of the exiled Prince Andrew of Greece, a descendant of Elizabeth’s great-great-grandmother Queen Victoria and his wife’s third cousin, never quite won the hearts of all Britons.

Elizabeth was the sovereign, but in family matters it was Philip who was viewed as the head of the family.

As first Princess Anne, then Prince Andrew and then finally Prince Charles suffered a broken marriage, royal watchers pointed the finger at Philip as a doughty father, calling him domineering and cold, particularly with his sons.

When the popularity of the House of Windsor plunged after the death of Charles’s first wife Princess Diana in 1997, he was accused of helping stop the monarchy adapt to a new Britain.

A decade after Diana was killed in a Paris car crash at 36, Philip had to suffer the embarrassment of hearing Mohamed al-Fayed, the former owner of London’s luxury Harrods store whose son was the princess’s lover, allege the prince had ordered her death.

A jury rejected the claims after hearing no evidence to back them up. But such accusations illustrated the country’s mixed feelings about him.

Philip was also the most controversial member of the royal family until the travails of his children and their spouses became regular tabloid fodder in the 1990s.

The duke was attacked for his views on everything from nuclear power to nature conservation. Critics called him a hypocrite for heading the World Wide Fund for Nature while taking part in blood sports such as pheasant shooting.

“I think that there’s a difference between being concerned for the conservation of nature and being a bunny-hugger,” he told the BBC.

It was such blunt comments that gained him the greatest attention. A remark about “slitty eyes” during a visit to China in the 1980s became symbolic of his often unguarded manner, which contrasted with the queen’s restraint.

Those who knew him said his reputation hid an urbane wit, devotion to his family, love of sport and a dedication to the business of being royal.

Descended himself from a royal family that had lost its throne, he knew that monarchies could come unstuck if they lost the respect of the people.

He once said during a Canadian trip: “If at any stage people feel that the monarchy has no further part to play, then for goodness sake let’s end the thing on amicable terms.”

Childhood on the move

Philippos Schleswig-Holstein Sonderburg-Glucksburg was born on a dining room table on the Greek island of Corfu on June 10, 1921, the fifth child and only son of Prince Andrew of Greece.

His parents went into exile when he was 18 months old. They sailed from Corfu with the little boy sleeping in a cot made hurriedly from orange boxes.

Philip had British and German blood through his mother, a great grand-daughter of Queen Victoria. She was born Princess Alice of Battenberg and became a nun after drifting apart from her husband, who died virtually penniless in 1944.

Philip lived his early life on the move around Europe. It was a troubled childhood.

He was educated at Gordonstoun, where his son Prince Charles was later an unwilling pupil, and became a naturalized British citizen, looking and sounding every bit the English gentleman.

But to his detractors he remained “Phil the Greek.”

Philip joined the Royal Naval College at Dartmouth as a cadet in 1939. He served in warships during World War Two, was mentioned in dispatches, took part in the Allied landings in Sicily and was in Tokyo Bay when Japan surrendered in 1945.

He and Elizabeth first met at the wedding of Philip’s cousin in 1934. Five years later the dashing young sailor attracted the attention of his future wife when the then-princess was 13 and visited Dartmouth with her parents.

“The color drained from her face and then she blushed. She stared at him and for the rest of the day followed him everywhere. She was in love from the beginning,” the late Earl Mountbatten, Philip’s uncle, recalled later.

They were married at Westminster Abbey on November 20, 1947, in a ceremony attended by statesmen and royalty from around the world.

He continued his naval career until 1951, then took leave and devoted himself full-time to public duties when Elizabeth became queen a year later.

“I suspect for Prince Philip it was quite difficult in the very early years of the reign because he had to sacrifice his naval career which is something he did mind about,” royal historian Hugo Vickers said.

There was one place where he outshone his wife – on the Pacific island of Tanna in the Vanuatu group, where people believed he was a god with magical powers and was the fount of all goodness.

Rumors of extra-marital activities and a rift with the queen were firmly denied in the 1950s.

In his biography of the queen, Robert Hardman said that during a royal tour of Australia in 1954, a camera crew witnessed Philip running out of a chalet with a pair of tennis shoes and a racquet flying after him.

The crew destroyed the film and later the queen herself approached them. “I’m sorry for that little interlude but, as you know, it happens in every marriage,” the queen told them, according to Hardman.

Decades later, their grandson Prince Harry said the queen had depended on Philip.

“Personally, I don’t think that she could do it without him,” he said.

In latter years, Philip eased up on royal duties as his health deteriorated.

He spent Christmas in 2011 in hospital after an operation to clear a blocked artery in his heart and he missed the end of celebrations to mark his wife’s 60th year on the throne in 2012 after being hospitalized with a bladder infection.

In August 2017 he retired from active public life altogether.

In January 2019, he escaped unhurt when his Land Rover car flipped over after a collision with another car close to the royals’ Sandringham residence in eastern England.

Asked whether he felt he had been a success in his role, he gave a typically phlegmatic response.

“I couldn’t care less,” he said. “Who cares what I think about it, I mean it’s ridiculous.” – Rappler.com