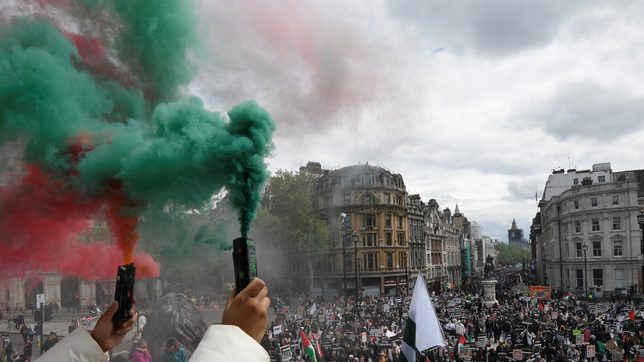 MARCH. Pro-Palestinian demonstrators attend a protest following a flare-up of Israeli-Palestinian violence, in London, Britain May 22, 2021.

Thousands of pro-Palestinian demonstrators marched through London and other British cities on Saturday to protest against Israeli air strikes on the Gaza Strip during fighting with the Islamist group Hamas.

Protesters called for sanctions on Israel during the march in London. Some were draped in Palestinian flags and set off green and red smoke flares. Others carried banners declaring “Free Palestine,” “Stop bombing Gaza” and “Sanctions on Israel.”

A ceasefire on Friday, mediated by Egypt, ended 11 days of hostilities, during which the Israeli military pounded Gaza with air strikes which it said were a response to rockets fired at Israel by Palestinians militants.

Gaza medical officials said 248 people were killed in the Palestinian enclave, and aid officials have expressed concern about the humanitarian situation there.

Health officials said 13 people were killed in Israel in the hostilities, during which the Israeli military said Hamas, Islamic Jihad and other militant groups fired around 4,350 rockets, many of which did not reach Israel or were intercepted. – Rappler.com