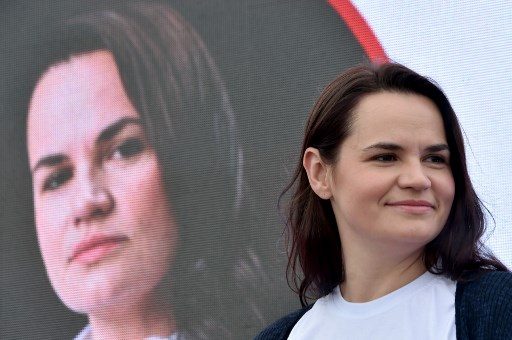 Presidential candidate Svetlana Tikhanovskaya leads her campaign rally in the town of Maladzechna, some 70 km northwest of Minsk, on July 31, 2020. (Photo by Sergei GAPON / AFP)

Svetlana Tikhanovskaya, a 37-year-old mother of two, never thought she would run for president or become the leader of the Belarusian protest movement.

But in a tale worthy of Hollywood, in a matter of weeks Tikhanovskaya has gone from a political unknown to the strongest challenger to Belarus strongman Alexander Lukashenko, who claimed an overwhelming victory in a presidential election on Sunday, August 9.

Tikhanovskaya says the result of the vote has been rigged and called on Lukashenko – often called “Europe’s last dictator” – to go peacefully and stop using force after police cracked down on protesters.

“I consider myself the winner of this election,” she said on Monday, August 10.

Tikhanovskaya said she contested the election to get her jailed blogger husband out of prison and win much-needed freedom for the ex-Soviet country of 9.5 million people.

“I love Belarusians and I want to give them an opportunity to have a choice,” she said ahead of the vote.

Tikhanovskaya, an English teacher by training, only made the decision to stand for president in May.

Her husband Sergei Tikhanovsky – a popular 41-year-old YouTube blogger – had been detained and could not submit his own presidential bid in time.

Despite a lack of political experience, she quickly emerged as the country’s top opposition figure, with tens of thousands taking to the streets to support her bid.

In speeches, Tikhanovskaya has called herself an “ordinary woman, a mother, and wife” and pumped up crowds with calls for change.

“I have become the embodiment of people’s hope, their longing for change,” she told Agence France-Presse in an interview ahead of election day.

She said she was standing despite receiving threats.

Her husband has been accused of plotting mass unrest and collaborating with Russian mercenaries, claims Tikhanovskaya has called “very scary.”

Their 5-year-old daughter and 10-year-old son have been taken abroad for their own safety.

She said the separation from her children – including her son who is hearing impaired – was difficult.

Tikhanovskaya stressed that if elected, she would free her husband and other detained opposition figures and hold fresh polls.

Her bid has prompted skepticism from some, while others have compared her to historical heroines.

The Village, a Minsk-based news site, called her “an accidental Joan of Arc,” the 15th-century French peasant who helped achieve a pivotal military victory against the English before she was burned at the stake.

“You’re a wife of a Decembrist!” one supporter shouted at a rally, referring to 19th-century aristocrats who followed their husbands into Siberian exile.

Allocated live slots on state television, she listed alleged lies by Lukashenko’s regime, repeating: “They won’t show you this on television.”

She has accused Lukashenko of showing blatant disregard for the people during the coronavirus epidemic, which the strongman has dismissed as a hoax.

Tikhanovskaya says that she lacks the “massive charisma” of her husband, who has traveled round Belarus interviewing ordinary people for hard-hitting videos.

Image-wise, she pulled off a transformation with help from two women with more experience.

These are Veronika Tsepkalo, whose ex-diplomat husband Valery Tsepkalo was barred from standing, and Maria Kolesnikova, campaign chief of ex-banker Viktor Babaryko who was also dropped from the polls and is in jail.

The two women flanked her at rallies – with one Belarusian news outlet nicknaming them “Charlie’s Angels”.

Tikhanovskaya grew up in Mikashevichi, a small town south of Minsk.

With top grades she studied to become a teacher of English and German in the historic city of Mozyr. It was there she met her future husband, who owned a nightclub. – with reports from Agence France-Presse/Rappler.com