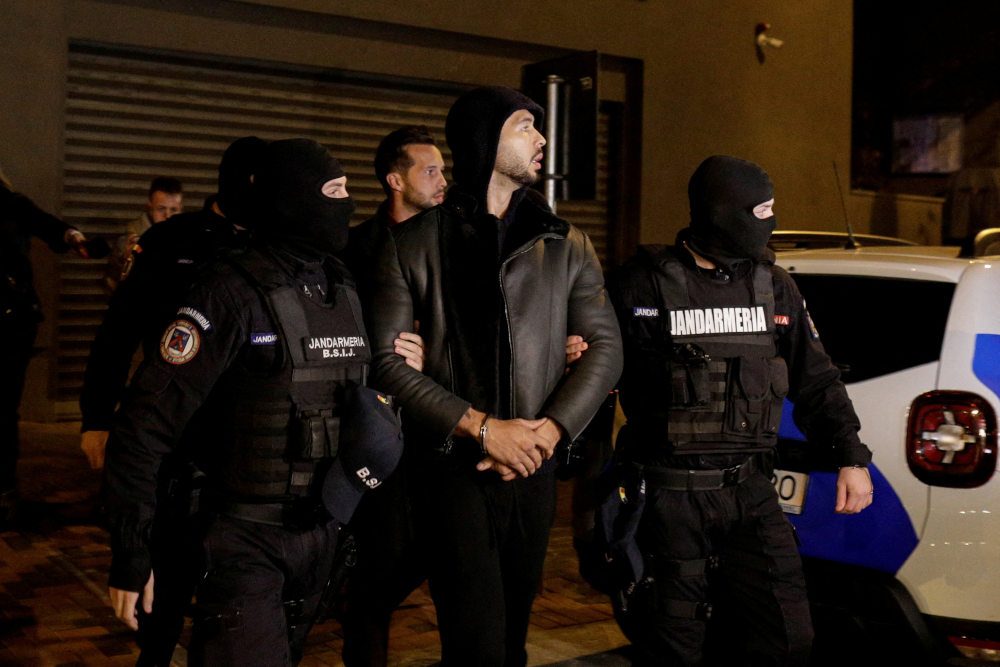 ARREST. Andrew Tate and Tristan Tate are escorted by police officers outside the headquarters of the Directorate for Investigating Organized Crime and Terrorism in Bucharest after being detained for 24 hours, in Bucharest, Romania, on December 29, 2022.

Facebook Twitter Copy URL
Copied
Should the court uphold the arrest warrant and the investigation need more time, prosecutors can seek approval for further extensions of up to 180 days of detention under Romanian law

BUCHAREST, Romania – A Romanian court is due to rule on Tuesday, January 10, on a challenge filed by Andrew Tate, an internet personality notorious for hate speech, against his 30-day arrest for alleged human trafficking and formation of an organized crime group to exploit six women.

Tate, his brother Tristan, and two Romanian female suspects were detained by Romanian anti-organized crime prosecutors on December 29 pending a criminal investigation. They have denied wrongdoing through an attorney and have challenged the arrest warrant.

Prosecutors have said the Tate brothers recruited victims by seducing them and falsely claiming to want a relationship.

The victims were then taken to properties on the outskirts of capital Bucharest and through physical violence and mental intimidation were sexually exploited by being forced to produce pornographic content for social media sites which generated large financial gains, according to prosecutors.

Prosecutors also said one of the brothers raped one of the victims in March of last year, which is when the investigation started.

“The possibility that the suspects would evade investigation, leave Romania and settle in countries that do not allow extradition given their financial possibilities and public comments to that regard cannot be ignored,” the court judge said in the written record approving the arrest.

Prosecutors have seized 15 luxury vehicles and over 10 properties and homes belonging to the suspects in Bucharest and Prahova and Brasov counties, Ramona Bolla, a spokesperson for Romanian anti-organized crime unit DIICOT, told Reuters.

The seizure was meant to prevent the assets being sold or concealed.

Should the court uphold the arrest warrant and the investigation need more time, prosecutors can seek approval for further extensions of up to 180 days of detention under Romanian law.

Tate gained mainstream notoriety for misogynistic remarks and hate speech, which got him banned from all major social media platforms, although since Elon Musk took over Twitter his account was reinstated in November.

The former professional kickboxer, who holds US and British nationality, has said women are partially responsible for being raped and that they belong to men. He is a self-professed misogynist.

On a podcast last year, he said he started making money by convincing multiple girlfriends to videochat and share the profits back when he lived in London.

“How can I use these women to make me money?” Tate said, adding his business started with two girlfriends and peaked with 75 women working for him and earning $600,000 a month.

He has also said he moved to Romania after being investigated in the United Kingdom on charges of sexual assault, which were ultimately dropped, because he liked living in countries where corruption was accessible to everybody. – Rappler.com