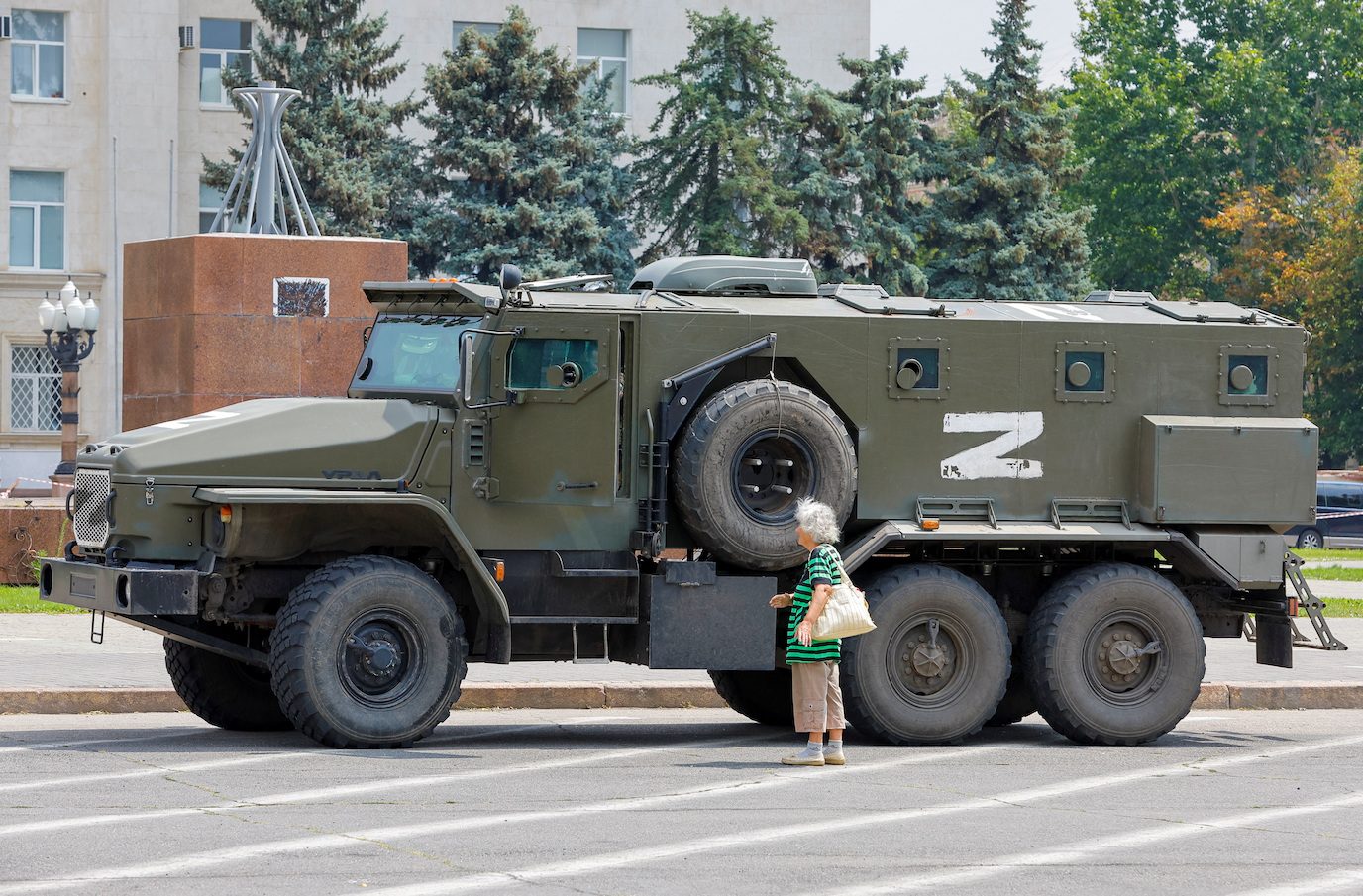 STRATEGIC PLACE. File photo of an armoured truck of pro-Russian troops parked near Ukraine's former regional council's building during Ukraine-Russia conflict in the city of Kherson, a strategic place for Russia, on July 25, 2022. REUTERS/Alexander Ermochenko

Facebook Twitter Copy URL
Copied
(1st UPDATE) Ukraine reacts with caution to the announcement, saying some Russian forces were still in Kherson and additional Russian manpower was being sent to the region

KYIV, Ukraine – Moscow ordered troops to withdraw from near the strategic southern Ukrainian city of Kherson in a major setback as a top US general estimated Russia has suffered more than 100,000 killed or wounded since invading its neighbor in February.

Defense Minister Sergei Shoigu on Wednesday, November 9, announced Russian forces would retreat from the west bank of the Dnipro River near Kherson in what could be a turning point in the war.

Ukraine reacted with caution to the announcement, saying some Russian forces were still in Kherson and additional Russian manpower was being sent to the region.

“They are moving out but not as much as would be taking place if it was a full pullout or regrouping,” Oleksiy Arestovych, adviser to President Volodymyr Zelenskiy, said in a video posted online on Wednesday night.

Russian forces were destroying bridges as they left and mining roads, Arestovych said.

“And for the moment, we don’t know their intentions – will they engage in fighting with us and will they try to hold the city of Kherson? They are moving very slowly,” he said.

Kherson city was the only regional capital Russia captured after the invasion, and it has been the focus of a Ukrainian counter-offensive. The city controls both the only land route to the Crimea peninsula that Russia annexed in 2014, and the mouth of the Dnipro, the river that bisects Ukraine. Russian-installed officials have been evacuating tens of thousands of civilians in recent weeks.

America’s top general estimated on Wednesday that Russia’s military had suffered more than 100,000 of its soldiers killed or wounded in Ukraine, and added Kyiv’s armed forces “probably” suffered a similar level of casualties. About 40,000 Ukrainian civilians were also probably killed, he said.

The estimates could not be independently confirmed by Reuters. General Mark Milley, speaking to the Economic Club in New York, did not say how he calculated those estimates.

Milley said the initial indicators suggested Russia was following through with its withdrawal from Kherson. But he cautioned that it could take time to complete.

In televised comments, General Sergei Surovikin, in overall command of the war, reported to Shoigu that it was no longer possible to supply Kherson city. He said he proposed to take up defensive lines on the eastern bank of the Dnipro River.

Shoigu told Surovikin: “I agree with your conclusions and proposals. For us, the life and health of Russian servicemen is always a priority. We must also take into account the threats to the civilian population.

“Proceed with the withdrawal of troops and take all measures to ensure the safe transfer of personnel, weapons and equipment across the Dnipro River.”

Ukrainian forces were strengthening their positions “step by step” in the south, Zelenskiy said in a Wednesday night address.

“There is a lot of joy in the information space today, and it is clear why, but…the enemy will make no gifts to us,” said Zelenskiy, mentioning Kherson just once in his five-minute speech.

US President Joe Biden said Moscow’s order to withdraw from Kherson was “evidence of the fact that they have some real problems with the Russian military.”

Biden said he hopes Democrats and Republicans can continue the bipartisan approach of confronting Russia’s aggression in Ukraine after Tuesday’s midterm elections, in which his Democratic Party performed better than expected.

A regular evening statement by the Ukrainian military on Wednesday made no direct reference to Kherson region or its capital. Russian forces shelled more than 25 towns and villages on the southern front along the line of contact, it said, and there were more than 50 drone reconnaissance missions.

Ukrainian legislator David Arakhamia, who led Kyiv’s delegation to peace talks early in Russia’s invasion, said however, that a military operation in the Kherson region was under way.

He described the Russians’ situation as critical and said, “Sooner or later, they will either leave Kherson, Donetsk, Luhansk and Sevastopol (in Crimea) or be destroyed.”

EXPLAINER: Why Ukraine’s southern Kherson region is a strategic prize 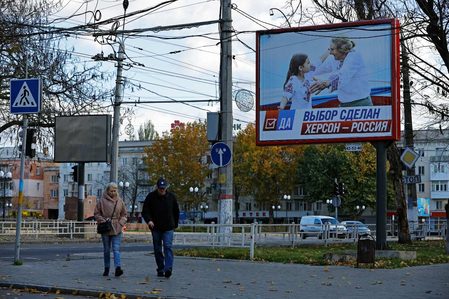 If Ukrainian forces take the entire west bank of the Dnipro, their US-supplied long-range artillery and HIMARS multiple rocket launchers would be able to strike Russian logistics bases and positions on the east bank, according to military experts.

But the Ukrainians may face numerous booby traps and could be targeted by intense Russian artillery barrages.

NATO Secretary General Jens Stoltenberg, on a visit to London, welcomed the news from Kherson but also struck a note of caution.

“We should not underestimate Russia…. We have seen the drones, we have seen the missile attacks, it shows that Russia can still inflict a lot of damage,” he told Sky News.

Compounding the sense of Russian disarray in Kherson, Moscow’s number two official there, Kirill Stremousov, was killed on Wednesday in what Moscow said was a car crash.

Russia’s leading war hawks on Wednesday swiftly voiced support for the decision to abandon Kherson city, putting a brave face on one of Moscow’s most humiliating retreats.

“After weighing all the pros and cons, General Surovikin made the difficult but right choice between senseless sacrifices for the sake of loud statements and saving the priceless lives of soldiers,” said Ramzan Kadyrov, the Chechen leader who has frequently urged a more aggressive approach to the war. – Rappler.com