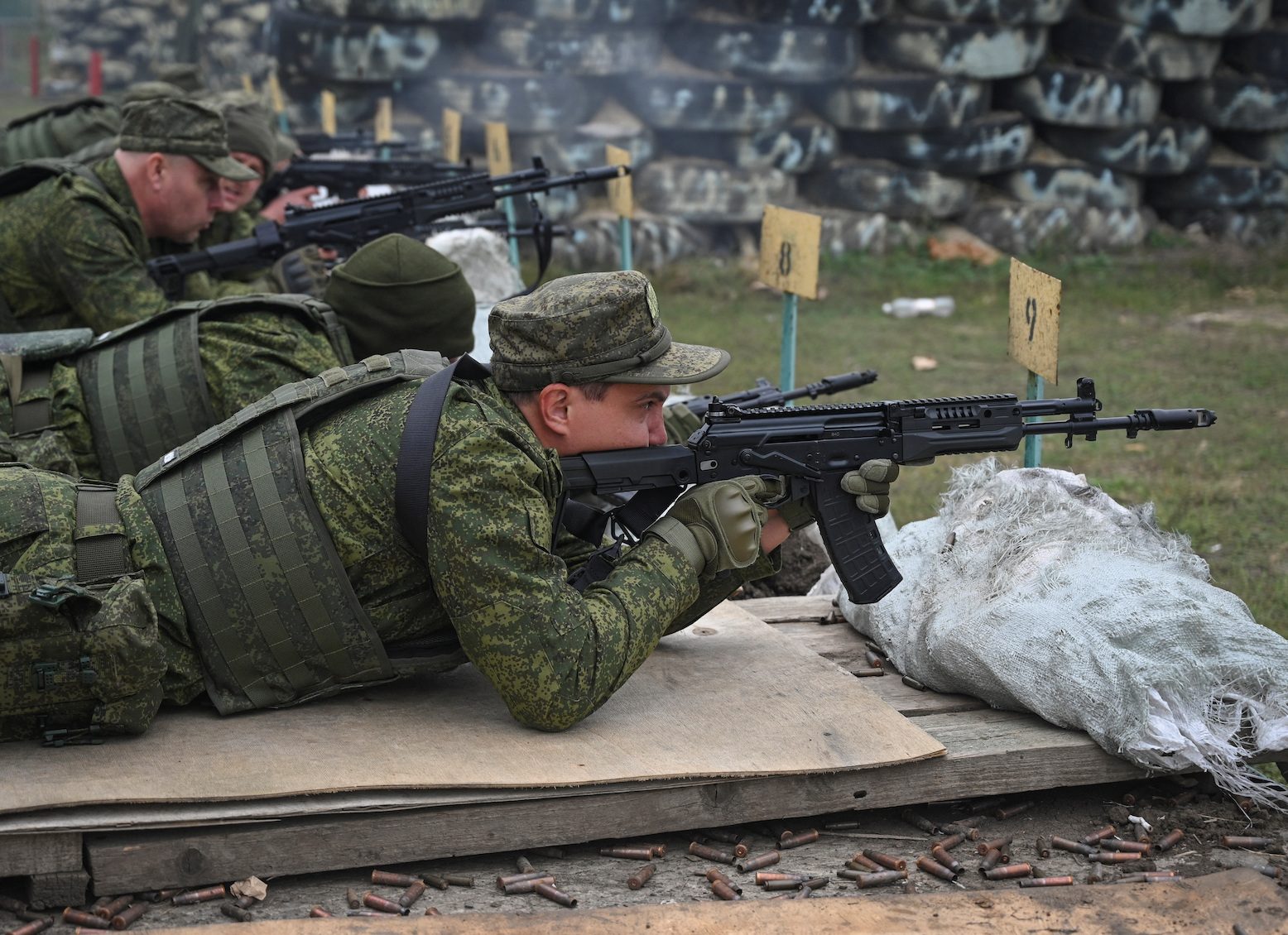 Newly-mobilised reservists take part in a training on a range in Rostov region, Russia October 4, 2022.

Facebook Twitter Copy URL
Copied
Russia does not completely control any of the four regions it says it is annexing - Donetsk, Luhansk, Zaporizhzhia and Kherson - and the Kremlin says it has yet to determine the final borders of the annexed territory

Russian President Vladimir Putin may finalize his plan to annex four Ukrainian regions later on Tuesday, October 4, even as his forces are being pushed back by Ukraine on two separate battlefield fronts, shrinking the amount of seized territory he controls.

Russia, which has escalated its seven-month war with its annexation drive, a military mobilization and warnings of nuclear weapons use, looks in a hurry to complete a process Ukraine and the West say is illegal and will not be recognized.

Earlier on Tuesday, the upper house of Russia’s parliament voted to approve the four regions’ incorporation into Russia, which taken together represent around 18% of Ukraine. The Kremlin said that Putin’s signature, the final stage in the process, was likely later in the day.

In Brussels, the European Union summoned Russia’s envoy to the EU to reject Moscow’s “illegal annexation” and urge it to unconditionally withdraw all of its troops from the entire territory of Ukraine.

Russia does not completely control any of the four regions it says it is annexing – Donetsk, Luhansk, Zaporizhzhia and Kherson – and the Kremlin has said it has yet to determine the final borders of the annexed territory.

Russian forces in the eastern Donetsk and southern Kherson regions have been forced to retreat in recent days and appear to be struggling to halt an increasingly Western-equipped Ukrainian
army.

Moscow is hoping a “partial mobilization” it announced two weeks ago could help turn the tide.

Defense Minister Sergei Shoigu was cited by the RIA news agency on Tuesday as saying that Russia had so far called up more than 200,000 reservists out of a planned 300,000 men.

Many Russian men have fled the country rather than fight in Ukraine, however, and Russian lawyers say they are working flat out to offer advice to men who want to avoid being drafted. Some Russians are making journeys of thousands of miles by car, train and plane to escape.

President Alexander Lukashenko of Belarus, Ukraine’s northern neighbor and an ally of Putin, accused Kyiv on Tuesday of sending 15,000 troops to the border area to build defenses and conduct reconnaissance, actions he called “provocations”.

In their biggest breakthrough in the south since the seven-month-old war began, Ukrainian forces retook several villages in an advance along the strategic Dnipro River on Monday, Ukrainian officials and a Russian-installed leader in the area said.

In the east, Ukrainian forces have been expanding an offensive after capturing the main Russian bastion in the north of Donetsk, the town of Lyman, hours after Putin proclaimed the annexation of the province last week.

Ukrainian forces in the south destroyed 31 Russian tanks and one multiple rocket launcher, the military’s southern operational command said in an overnight update.

Ukrainian video footage from Novopetrivka, a newly recaptured village in the Kherson region, showed Ukrainian soldiers removing a Russian flag from a power pylon, wiping their feet on it and setting it alight. They then raised a Ukrainian flag.

Vladimir Saldo, the Russian-installed leader in occupied parts of Ukraine’s Kherson province, told Russian state television that Ukrainian troops had retaken the southern town of Dudchany along the west bank of the Dnipro River, which bisects the country.

Dudchany is about 30 km (20 miles) south of where the front stood before Monday’s breakthrough, indicating Ukraine’s fastest advance of the war in the south.

Ukraine has released little information about Kherson, in keeping with a policy of withholding details about ongoing advances. President Volodymyr Zelenskiy said in his nightly video address that Ukraine’s army had seized back towns in a number of areas, without giving details, and that heavy fighting was underway in several locations.

On the eastern front, Denis Pushilin, the Russia-backed leader in Donetsk, said Russian forces were building a serious line of defense around the city of Kreminna after being pushed back.

In the early hours of Tuesday morning, a Russian missile crashed into the outskirts of the eastern Ukraine-controlled city of Kramatorsk. A Reuters reporter on the scene said the missile had gouged a huge crater in the backyard of a house.

The carcass of a second missile that apparently failed to detonate sat about 150 meters away in the yard of another house after crashing through its roof. A woman was taken to hospital after her husband pulled her from the rubble of their home.

No talks with Putin

In a decree on Tuesday, Zelenskiy formally declared any talks with Putin “impossible”, while leaving the door open to talks with Moscow if it got a new leader.

The Kremlin said what it calls its “special military operation” in Ukraine would not end if Kyiv ruled out talks, adding that it “takes two sides to negotiate”.

Kremlin spokesman Dmitry Peskov also said Moscow did not want to take part in “nuclear rhetoric” spread by the West, after Britain’s Times newspaper reported that NATO had warned members Putin might test an atomic weapon on Ukraine’s border.

The newspaper said Russia had moved a train thought to be linked to a unit responsible for nuclear munitions.

The Kremlin had more time however for a potential peace plan floated on Twitter by billionaire Elon Musk, whereby Ukraine would cede Crimea, allow new referendums on Russian-occupied land and agree to neutrality.

“It is very positive that somebody like Elon Musk is looking for a peaceful way out of this situation,” said Peskov of the plan, which was denounced by Kyiv as an effective reward for Moscow’s invasion. – Rappler.com