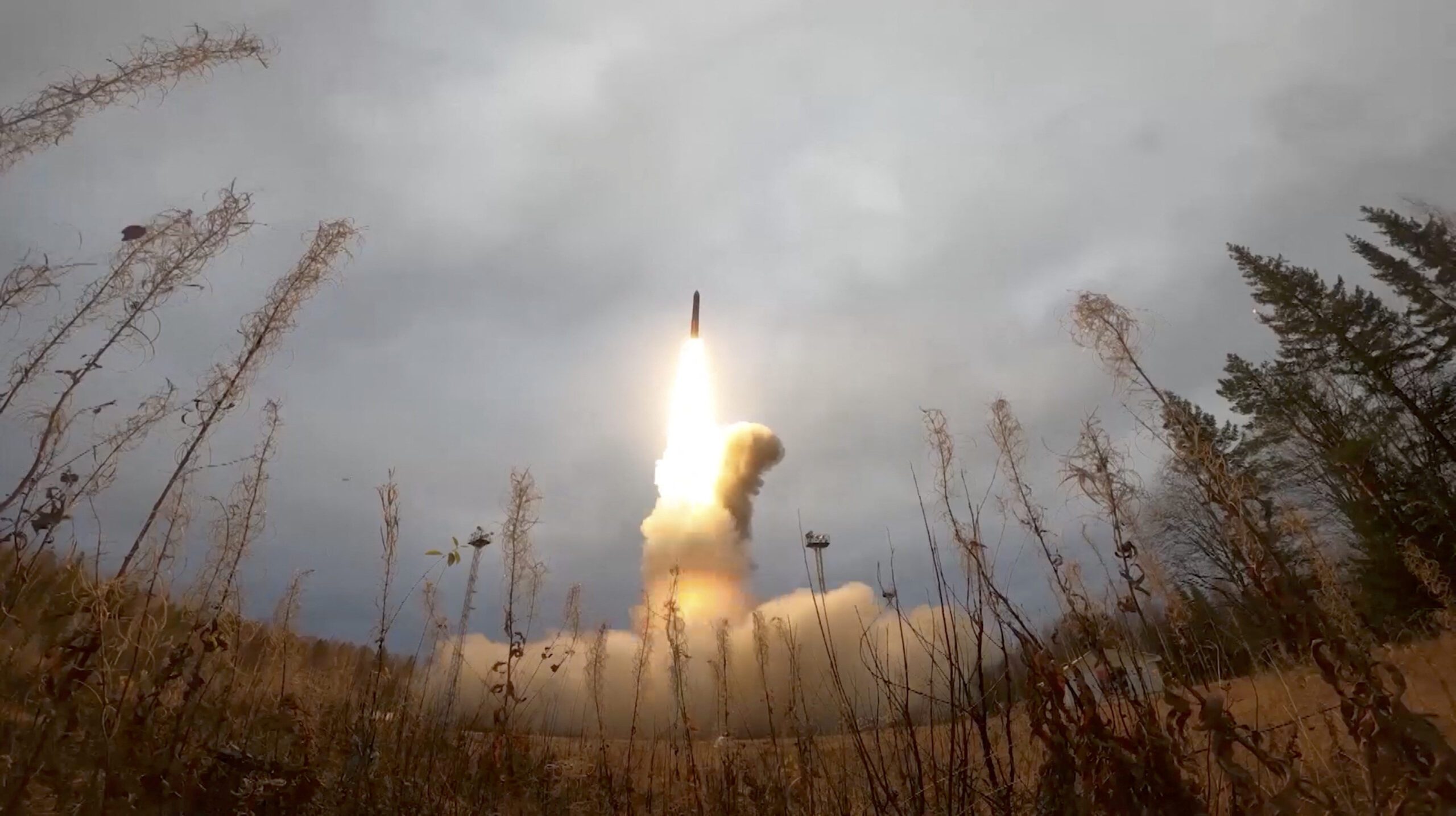 WEAPON. A still image from video, released by the Russian Defence Ministry, shows what it said to be Russia's Yars intercontinental ballistic missile launched during exercises held by the country's strategic nuclear forces at the Plesetsk Cosmodrome, Russia, in this image taken from handout footage released October 26, 2022.

Facebook Twitter Copy URL
Copied
Washington is reportedly planning to accelerate the deployment of a modernized version of the B61, the B61-12, with the new weapons arriving at European bases in December

LONDON, United Kingdom – Russia said on Saturday, October 29, that the accelerated deployment of modernized US B61 tactical nuclear weapons at NATO bases in Europe would lower the “nuclear threshold” and that Russia would take the move into account in its military planning.

Russia’s invasion of Ukraine has triggered the gravest confrontation between Moscow and the West since the 1962 Cuban Missile Crisis when the two Cold War superpowers came closest to nuclear war.

Russia has around 2,000 working tactical nuclear weapons while the United States has around 200 such weapons, half of which are at bases in Italy, Germany, Turkey, Belgium and the Netherlands.

Politico reported on Wednesday, October 26, that the United States told a closed NATO meeting this month that it would accelerate the deployment of a modernized version of the B61, the B61-12, with the new weapons arriving at European bases in December, several months earlier than planned.

The 12-feet B61-12 gravity bomb carries a lower yield nuclear warhead than many earlier versions but is more accurate and can penetrate below ground, according to research by the Federation of American Scientists published in 2014.

“The United States is modernizing them, increasing their accuracy and reducing the power of the nuclear charge, that is, they turn these weapons into ‘battlefield weapons’, thereby reducing the nuclear threshold,” Grushko said.

The Pentagon did not respond to a request for comment out of US business hours. Politico quoted a spokesman as saying nuclear details would not be discussed but that the modernization of B61 weapons had been underway for years.

Amid the Ukraine crisis, President Vladimir Putin has repeatedly said that Russia will defend its territory with all available means, including nuclear weapons, if attacked.

The comments raised particular concern in the West after Moscow declared in September it had annexed four Ukrainian regions that its forces control parts of. Putin says the West has engaged in nuclear blackmail against Russia.

US President Joe Biden said on October 6 that Putin had brought the world closer to “Armageddon” than at any time since the Cuban Missile Crisis, though Biden later said he did not think that Putin would use a tactical nuclear weapon.

Putin has not mentioned using a tactical nuclear weapon but has said he suspects Ukraine could detonate a “dirty bomb”, a claim Ukraine and the West say is false.

The US B61 nuclear bomb was first tested in Nevada shortly after the Cuban Missile Crisis. Under Barack Obama, US president from 2009 to 2017, the development of a new version of the bomb, the B61-12, was approved.

Russia’s Grushko said that Moscow would also have to take account of the Lockheed Martin F-35 which would drop such a bomb. NATO, he said, had already strengthened the nuclear parts of its military planning.

NATO “has already made decisions to strengthen the nuclear component in the alliance’s military plans,” Grushko said.

Russia’s ambassador to Washington, Anatoly Antonov, said on Saturday on Telegram that the new B61 bombs had a “strategic significance” as Russia’s tactical nuclear weapons were in storage, yet these US bombs would be just a short flight from Russia’s borders.

The B61-12 will replace three other variants of the B61 currently in stockpiles, numbers 3, 4, and 7, according to the US National Nuclear Security Administration in a factsheet in 2021.

The United States, according the US 2022 Nuclear Posture Review published on Thursday, October 27, will bolster nuclear deterrence with the F-35, the B61-12 bombs and a nuclear-armed air-launched cruise missile.

“These flexible, tailorable capabilities are key to ensuring that Russia’s leadership does not miscalculate regarding the consequences of nuclear use on any scale, thereby reducing their confidence in both initiating conventional war against NATO and considering the employment of non-strategic nuclear weapons in such a conflict,” the review said. – Rappler.com