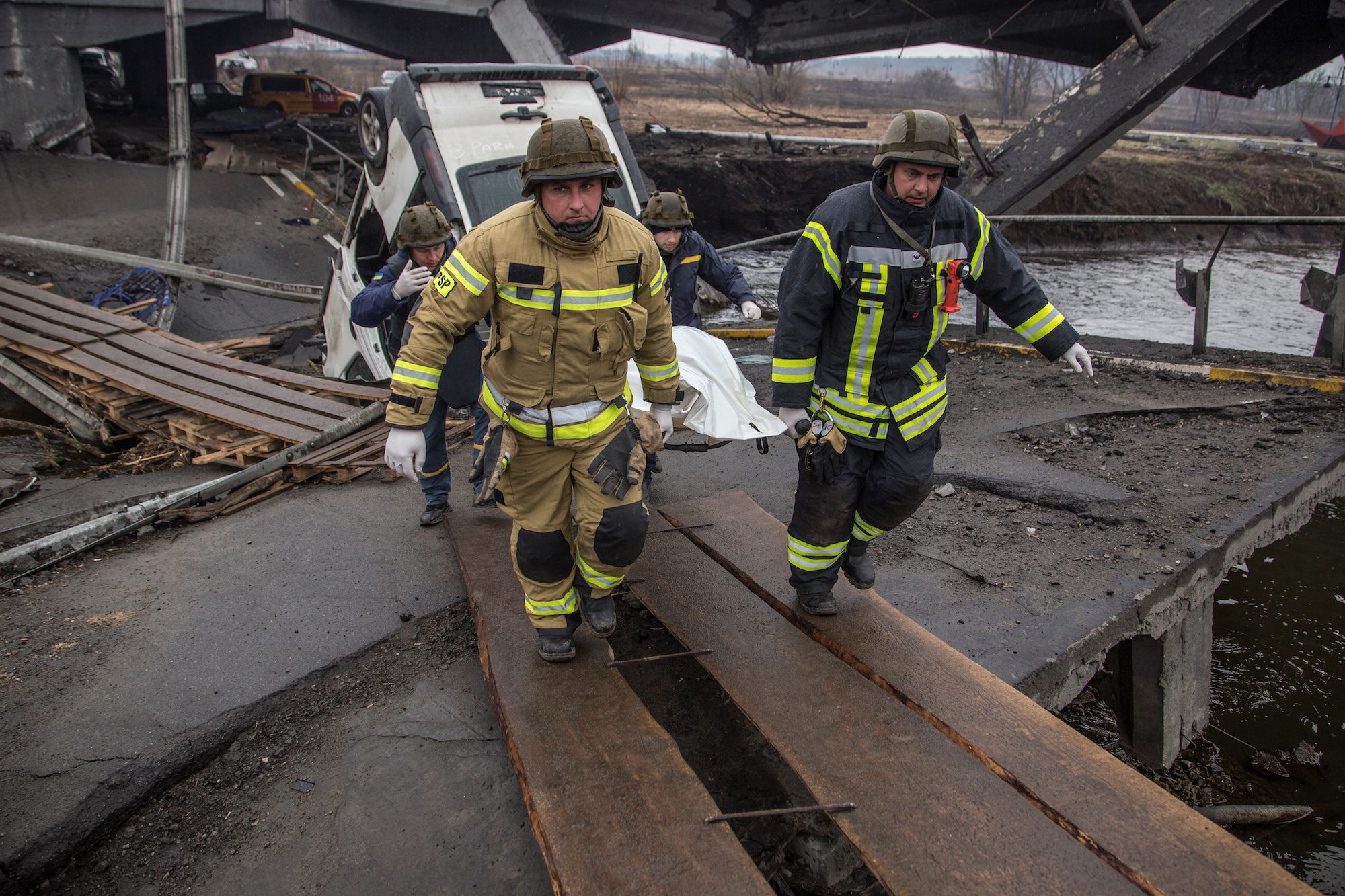 Rescuers carry the body of a person killed in the town of Irpin amid Russia's attack on Ukraine, in Kyiv region, Ukraine March 30, 2022. Picture taken March 30, 2022.

Facebook Twitter Copy URL
Copied
(2nd UPDATE) Negotiations aimed at ending the war are set to resume by video link, with Ukrainian forces making more advances on the ground in a counterattack that has repelled the Russians from Kyiv and broken the sieges of some cities in the north and east

IRPIN, Ukraine – A fuel depot was ablaze at one of Russia’s main logistics hubs for its Ukraine war effort on Friday, April 1, after what Moscow described as a cross-border air raid by Ukrainian helicopters, the first of its kind in the
five-week war.

Ukraine said it would neither confirm nor deny responsibility for the huge fire at the fuel depot in Belgorod, a Russian city near the border which has served as a logistics hub for Russian troops fighting in nearby eastern Ukraine.

Security camera footage of the depot, from a location verified by Reuters, showed a flash of light from what appears
to be a missile fired from low altitude in the sky, followed by an explosion on the ground. The regional governor said two Ukrainian helicopters had been involved in the raid.

Inside Ukraine, Ukrainian forces were moving into territory abandoned by withdrawing Russian troops in the north as peace talks resumed on Friday. But in the southeast, which Russia now says is the focus of its operation, the Red Cross said it had been barred from bringing aid to the besieged city of Mariupol.

A Russian threat to cut off gas supplies to Europe unless buyers paid with roubles by Friday was averted for now, with Moscow saying it would not halt supplies until new payments are due later in April.

Hours after the reported attack on the oil depot, an eyewitness reached by telephone in Belgorod, who asked not to be identified, said aircraft were flying overhead and there were continuous explosions from the direction of the border.

“Something is happening. There are planes and constant explosions in the distance.”

Kremlin spokesperson Dmitry Peskov said authorities were doing everything possible to reorganize the fuel supply chain and avoid disruption of energy supplies in Belgorod. The incident did not create comfortable conditions for the peace talks, he said.

Ukrainian defense ministry spokesperson Oleksandr Motuzyanyk said he would neither confirm nor deny a Ukrainian role.

“Ukraine is currently conducting a defensive operation against Russian aggression on the territory of Ukraine, and this does not mean that Ukraine is responsible for every catastrophe on Russia’s territory,” he said.

After failing to capture a single major Ukrainian city in five weeks of war, Russia says it is pulling back from northern Ukraine and shifting its focus to the southeast.

Russia has painted its draw-down in the north as a goodwill gesture for peace talks, but Ukraine and its allies say the Russian forces have been forced to regroup after taking heavy losses due to poor logistics and tough Ukrainian resistance.

Regional governors in Kyiv and Chernihiv said Russians were pulling out of areas in both those provinces, some heading back across borders to Belarus and Russia.

In Irpin, a commuter suburb northwest of Kyiv that had been one of the main battlegrounds for weeks, now firmly back in Ukrainian hands, volunteers and emergency workers carried the dead on stretchers out of the rubble. About a dozen bodies were zipped up in black plastic body bags, lined up on a street and loaded into vans.

Lilia Ristich was sitting on a metal playground swing with her young son Artur. Most people had fled; they had stayed.

“We were afraid to leave because they were shooting all the time, from the very first day. It was horrible when our house was hit. It was horrible,” she said. She listed off neighbors who had been killed – the man “buried there, on the lawn”; the couple with their 12-year-old child, all burned alive.

“When our army came then I fully understood we had been liberated. It was happiness beyond imagination. I pray for all this to end and for them never to come back,” she said. “When you hold a child in your arms it is an everlasting fear.”

Kyiv regional governor Oleksandr Pavlyuk said Russian forces had also withdrawn from Hostomel, another northwestern suburb which had seen intense fighting, but were still dug in at Bucha, between Hostomel and Irpin.

Further north, Russian forces have withdrawn from the site of the Chernobyl nuclear disaster, although Ukrainian officials said some Russians were still in the radioactive “exclusion zone” around it.

But Kyiv’s Mayor Vitaliy Kiltschko said it was not yet time for those who fled Kyiv to hurry home. “Huge” battles were still being fought to the north and east.

“The risk of dying is pretty high, and that’s why my advice to anyone who wants to come back is: Please, take a little bit more time,” he said.

Friday’s peace talks, by video link, picked up from a meeting in Turkey on Tuesday, where Ukraine offered to accept neutral status, with international guarantees for its security.

“We are preparing a response. There is some movement forward, above all in relation to the recognition of the impossibility of Ukraine” joining NATO, Russia’s Lavrov said on Friday.

Putin sent troops on February 24 for what he calls a “special military operation” to demilitarize Ukraine. Western countries call it an unprovoked war of aggression and say Putin’s real aim was to topple Ukraine’s government.

Russia now says it has turned its focus to the Donbas, a southeastern area where it has backed separatists since 2014. Russia’s biggest target in that area is Mariupol, where the United Nations believes thousands of civilians have died under a month-long siege, suffering relentless bombardment without access to food and water supplies, medicine or heat.

The International Committee of the Red Cross said a convoy it had organized had been denied permission to bring aid into Mariupol. It did not say who had refused permission.

Spokesperson Ewan Watson said the convoy of buses had set off for Mariupol on Friday without the aid supplies, in the hope of reaching the city to evacuate trapped civilians. Ukraine has blamed Russia for refusing to allow any aid to reach the city. – Rappler.com