GRAVES. Graves of civilians killed during Ukraine-Russia conflict are seen next to apartment buildings in the southern port city of Mariupol, Ukraine on April 10, 2022.

Facebook Twitter Copy URL
Copied
(4th UPDATE) If the ruins of Mariupol finally fall after nearly seven weeks of siege, it would be the first major city captured by Russia since the war began

LVIV, Ukraine – Ukraine said on Monday, April 11, its forces were still holding out in the port of Mariupol, where Russia was renewing its assault in a siege believed to have killed thousands of trapped civilians.

“Communication with the units of the defence forces heroically holding the city is stable and maintained,” Ukraine’s
military commander-in-chief, General Valeriy Zaluzhnyi, said on Facebook.

“We are doing the possible and impossible for the victory and the preservation of the lives of personnel and civilians in all directions. Believe in the Armed Forces of Ukraine!”

Earlier, a post on the Facebook page of a brigade of marines holding out in the city said they had run out of ammunition and were now facing death or capture, with Monday likely to be the “ultimate battle”.

Petro Andryushchenko, an aide to the Mariupol mayor, said on social media that the marines’ page had been hacked and the post was fake. Reuters could not independently verify it. 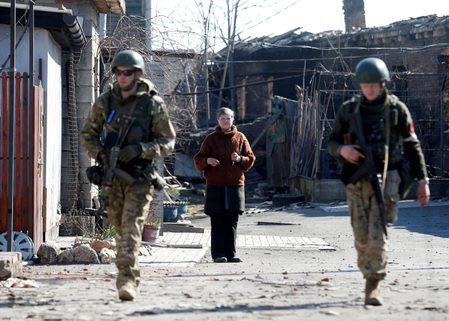 After having driven Russian forces away from the capital Kyiv this month, Ukraine is now preparing for a new Russian mass assault on eastern territory, which Russia now says is its main objective.

If the ruins of Mariupol finally fall after nearly seven weeks of siege, it would be the first major city captured by Russia since the war began. Russian forces advancing from Crimea would be able to link up with those pushing in from the east and turn their attention to encircling Ukraine’s main force in the area.

“There are tens of thousands of dead, but even despite this, the Russians are not stopping their offensive,” Zelenskiy told South Korea’s parliament by videolink, describing Russia’s assault on the city, which had 400,000 residents before the war.

Reuters could not verify the accuracy of his estimate, but the United Nations has also said it believes thousands of people have died in Mariupol, which has been completely cut off from food, electricity or water since February.

In a statement after the meeting, Nehammer said the discussion with Putin was “very direct, open and tough”. He added that his most important message to Putin was that the war in Ukraine must end because “in a war there are only losers on both sides”.

Russian Foreign Minister Sergei Lavrov said the Kremlin would not halt its operation for any new round of peace talks.

“A decision was made that during the next rounds of talks, there would be no pause (in military action) so long as a final agreement is not reached,” Lavrov said.

Russia now says its the aim of what it calls a “special military operation” is to support independence declarations by
separatists it has backed since 2014, who have laid claim to the entire Luhansk and Donetsk provinces. That includes Mariupol and other cities long still held by Ukraine.

Britain’s defense ministry said Russian shelling continued in the Donetsk and Luhansk regions. But Ukrainian forces had beaten back several assaults and destroyed Russian tanks, vehicles and artillery equipment, it said in its regular intelligence bulletin.

Addressing South Korea’s parliament, Zelenskiy said Russia was concentrating tens of thousands of soldiers for the next offensive.

Russia’s defense ministry said its sea-launched missiles on Sunday destroyed S-300 anti-aircraft missile systems which had been supplied to Ukraine by a European country. The systems were concealed in a hangar on the outskirts of Dnipro in central Ukraine, it said. Reuters could not confirm this.

As Russian forces have retreated from the outskirts of Kyiv they left behind evidence of Ukrainian civilians killed under their occupation, in what Western countries have condemned as war crimes. Moscow has rejected the accusations and denies targeting civilians.

Last week, Russia also killed 57 people, according to Ukrainian officials, in a missile strike on a train station in the Donetsk region, where thousands of civilians were trying to flee the expected new Russian advance. Moscow denied blame for the strike. The Russian missile that hit the station had the words “for the children” written on the side.

Luhansk Governor Serhiy Gaidai, speaking to Ukrainian television on Monday, said shelling in the region was increasing day by day.

“The most difficult situation is in Rubizhne and Popasna. They are being shelled constantly, round the clock,” Gaidai said, referring to cities in the region.

He urged all civilians to evacuate.

“Those that wanted to leave have already left, while now many are left in bomb shelters who are perhaps frightened to come out of the shelters, or scared to lose their possessions.”

French bank Societe Generale became the latest company to retreat from Russia, agreeing to sell its stake in
Rosbank and the Russian lender’s insurance subsidiaries to Interros Capital, a firm linked to billionaire Vladimir Potanin.

Several EU ministers said on Monday the bloc’s executive was drafting proposals for an oil embargo on Russia, although there was still no agreement to ban Russian crude.

The World Bank forecast the war would cause Ukraine’s economic output to collapse by 45% this year, with half of its businesses shuttered, grain exports mostly cut off by Russia’s naval blockade and destruction rendering economic activity impossible in many areas.

The bank forecast Russia’s economy would contract by 11.2% this year due to the Western sanctions.

US will supply Ukraine with ‘the weapons it needs’ against Russia 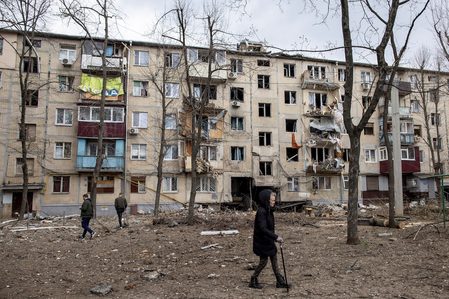