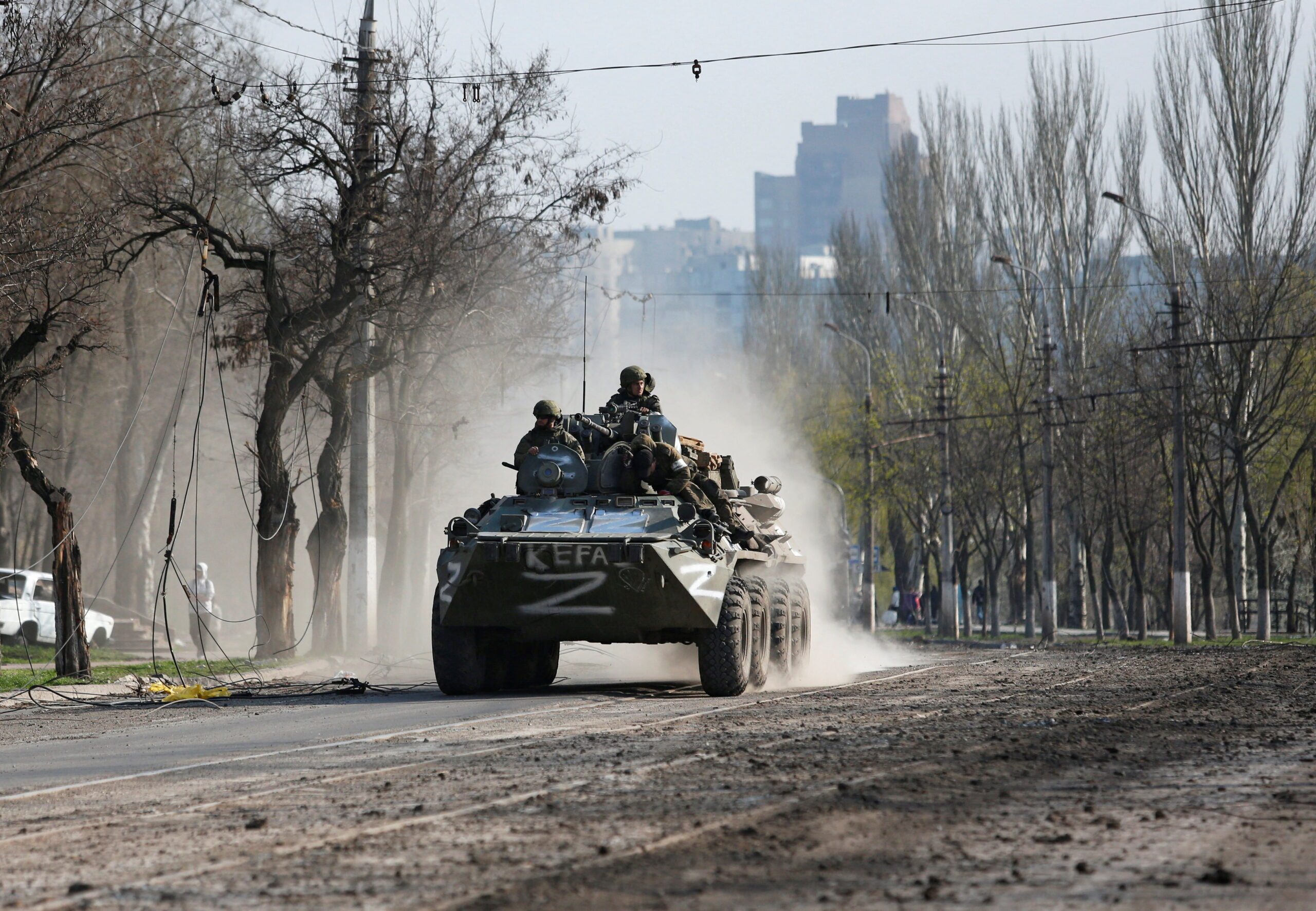 Facebook Twitter Copy URL
Copied
(5th UPDATE) 'Our soldiers are blocked, the wounded are blocked. There is a humanitarian crisis... Nevertheless, the guys are defending themselves,' says Ukraine President Volodymyr Zelenskiy

KYIV, Ukraine – Ukrainian soldiers appeared to defy a Russian ultimatum to lay down their arms on Sunday, April 17, in the pulverized port of Mariupol which Moscow said its forces had almost completely seized in what would be its biggest prize of the nearly two-month war.

Several hours after a 0300 GMT deadline, there was no sign of surrender by Ukrainian fighters holed up in the Azovstal steelworks overlooking the Sea of Azov.

Citing radio intercepts, Russia’s defence ministry said the encircled defenders, including 400 “foreign mercenaries,” had orders to shoot any among them who wanted to give up.

There was no word on that from Ukraine’s government.

Having failed to overcome Ukrainian resistance in the north, the Russian military has refocused its ground offensive on the eastern Donbas region while maintaining long-distance strikes elsewhere including the capital, Kyiv.

About four million Ukrainians have fled the country, cities have been shattered and thousands have died.

“The occupiers will be responsible for everything they did in Ukraine,” President Volodymyr Zelenskiy said on his Telegram account, posting images of destruction he said were akin to the “terrible times” of World War II.

Implicitly criticizing Russia too, Pope Francis pleaded for an end to the bloodshed and lamented the “Easter of War” during his address in St. Peter’s Square after Mass.

“May there be peace for war-torn Ukraine, so sorely tried by the violence and destruction of the cruel and senseless war into which it was dragged,” he said.

Capturing Mariupol, the main port in Donbas, would be a strategic prize for Russia, connecting territory held by pro-Russian separatists in the east with the Crimea region that Moscow annexed in 2014. Russia said on Saturday its troops had cleared the urban area of Mariupol.

Zelenskiy accused Russia on Saturday, April 16, of “deliberately trying to destroy everyone” in Mariupol and said his government was in touch with the defenders. But he did not address Moscow’s claim that Ukrainian forces were no longer in urban districts.

The city has seen some of the fiercest fighting and worst civilian suffering since the February 24 invasion, with bodies littering the rubble and thousands hunkered down in atrocious conditions underground.

The city’s steelworks, one of Europe’s biggest metallurgical plants with a maze of rail tracks and blast furnaces, has become a last stand for the outnumbered defenders.

“All who lay down their arms are guaranteed that their lives will be spared,” Russia’s defense ministry said, offering the defending “remnants” a four-hour window to leave the plant.

Zelenskiy has said killing his troops would put paid to peace efforts.

It was not known how many soldiers were in the steelworks. Satellite images have shown smoke and fire coming from the area, which is riddled with tunnels.

Russia calls its action a special military operation to demilitarize Ukraine and eradicate what it calls dangerous nationalists backed by an expansionist NATO military alliance. The West and Kyiv accuse President Vladimir Putin of unprovoked aggression.

Russia said Ukraine had lost more than 4,000 soldiers in Mariupol as of Saturday. Kyiv says its total troop losses nationwide so far in the war are less than that, between 2,500 and 3,000. Reuters has not been able to verify either side’s figures.

Elsewhere in Ukraine, there were more reports on Sunday of Russian strikes around major popular centres.

Russia said it had destroyed an ammunition factory near the capital, according to the RIA news agency.

As cleanup operations continued in areas where the Russians retreated, Ukraine’s human rights ombudswoman said almost all high-rise buildings in the town of Okhtyrka were unfit for occupation, while the State Emergencies Service said 41 bodies had been recovered in the town of Borodyanka.

Most Ukrainians celebrate Orthodox Easter next Sunday, but in Bucha, a town north of Kyiv where Ukraine accuses Russia of killing dozens of civilians, some 50 people attended a service at the town’s church, carrying pussy willow and praying for the dead.

Russia denies targeting civilians and has called pictures of those killed in Bucha fake.

“I just prayed today to stop crying,” said resident Evgeniya Lebedko outside the church after the service.

“We have survived these horrors and we are constantly crying. And I don’t want those tears to fall but I go out every day and I smell it and I cry all the time.”

Despite the desperate situation in Mariupol, Ukraine said it was holding off Russian forces in other parts of the Donbas regions of Donetsk and Luhansk.

Luhansk governor Sehriy Gaidai said that since the start of the war, all but 20,000 of acting capital Sievierodonetsk’s 130,000 residents had left the city. – Rappler.com