Putin claims victory in Mariupol; US to send more guns and money 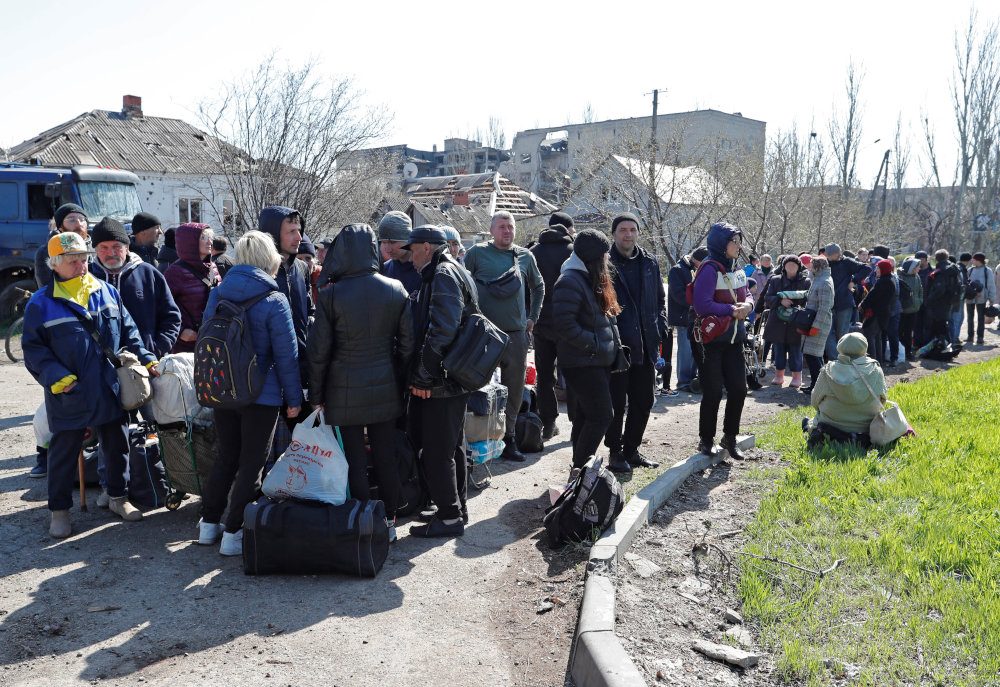 MARIUPOL EVACUATIONS. Evacuees wait before boarding a bus to leave the city during Ukraine-Russia conflict in the southern port of Mariupol, Ukraine April 20, 2022.

KYIV, Ukraine – Russian President Vladimir Putin claimed victory in the biggest battle of the war in Ukraine on Thursday, April 21, declaring the port of Mariupol “liberated” after nearly two months of siege although hundreds of defenders were still holed up inside a steel works.

Ukraine derided Putin’s attempt to avoid a final clash with its forces in the city as an acknowledgment that he lacked the troops to defeat them.

In Washington, US President Joe Biden authorized a further $800 million in military aid for Ukraine including heavy
artillery, citing a “critical window” in the conflict as it enters a new phase.

Ukrainian President Volodymyr Zelenskiy said Russia’s leadership had made a “catastrophic mistake” by invading his country. He ruled out going to Moscow for direct talks on ending the war, telling Russian media outlet Mediazona: “That is simply out of the question.”

Mariupol, once home to 400,000 people, has seen not only the most intense battle of the war that started when Russian forces invaded on February 24 but also its worst humanitarian catastrophe.

Hundreds of thousands of civilians were cut off for nearly two months under Russian siege and bombardment.

Control of the city, which lies on the Sea of Azov, links territory held by separatists Russia backs in eastern Ukraine’s
Donbas region with Crimea, the peninsula Moscow seized in 2014.

Ukrainian fighters remained inside the Azovstal steel complex, one of the biggest metallurgical facilities in Europe, covering 11 sq km with huge buildings, underground bunkers and tunnels. Putin had told the defenders to lay down their weapons and surrender or die.

But in a televised meeting at the Kremlin on Thursday, Putin told Defense Minister Sergei Shoigu: “You successfully completed the combat effort to liberate Mariupol. Let me congratulate you on this occasion, and please convey my congratulations to the troops.”

He said it was unnecessary to storm the industrial zone and ordered such action to be cancelled.

“There’s no need to climb into these catacombs and crawl underground through these industrial facilities … Block off this industrial area so that not even a fly can get through.”

The decision not to storm the Azovstal steel plant after days of ultimatums to its defenders allowed Putin to claim his first big prize since his forces were driven out of northern Ukraine last month. But it falls short of the unambiguous victory Moscow has sought after months of combat in a city reduced to rubble.

“They physically cannot take Azovstal, they have understood this, they have taken huge losses there,” Ukrainian presidential adviser Oleksiy Arestovych told a briefing. “Our defenders continue to hold it.”

Journalists who reached Mariupol during the siege found streets littered with corpses, nearly all buildings destroyed, and residents huddled freezing in cellars, venturing out to cook scraps on makeshift stoves or to bury bodies in gardens.

Ukraine estimates that tens of thousands of civilians have died in Mariupol, some buried in mass graves. The United Nations and Red Cross say the civilian toll is still unknowable, but is at least in the thousands.

Shoigu told Putin that Russia had killed more than 4,000 Ukrainian troops in its campaign to take Mariupol and that 1,478 had given themselves up. Those figures could not be verified.

Ukrainian deputy prime minister Iryna Vereshchuk said 1,000 civilians and 500 wounded soldiers needed to be brought out from the plant immediately, blaming Russian forces for the failure to establish a safe corridor that she said had been agreed.

Moscow says Russia has taken in 140,000 civilians from the port city in humanitarian evacuations. Kyiv says some were deported by force, in what would be a war crime.

US President Biden on Thursday pledged to send dozens of howitzers, 144,000 rounds of ammunition and tactical drones to Ukraine as it faces a new Russian offensive in the east.

“We’re in a critical window now of time where they’re going to set the stage for the next phase of this war,” Biden said.

The United States and allies are “moving as fast as possible” to provide Ukraine with the equipment and weapons it
needs, he said.

The new arms package is the same size as an $800 million one announced last week. Biden also called on Congress for supplemental funding to provide additional aid for Kyiv.

The president also announced plans to ban Russian-affiliated ships from US borders, adding to a host of Western sanctions on Moscow.

After failing to capture the capital Kyiv last month and being forced to withdraw from northern Ukraine, Russian forces regrouped this week to launch a new offensive in the two eastern provinces known as the Donbas.

Ukraine said Russian forces had failed so far to completely capture Rubizhne, a Donbas town that has been a focus of their advance. The city of Kharkiv, near the Russian supply lines into Donbas, came under heavy bombardment, its mayor said.

With both sides hoping for success on the battlefield in Donbas, peace talks have been shelved.

British military intelligence said Russian forces were keen to demonstrate significant success by May 9, the anniversary of the allied victory in Europe in World War Two when Russia’s military traditionally holds a spectacular parade on Red Square.

Russia calls its incursion a “special military operation” to demilitarize and “denazify” Ukraine. Kyiv and its Western allies reject that as a false pretext for an illegal war of aggression. – Rappler.com