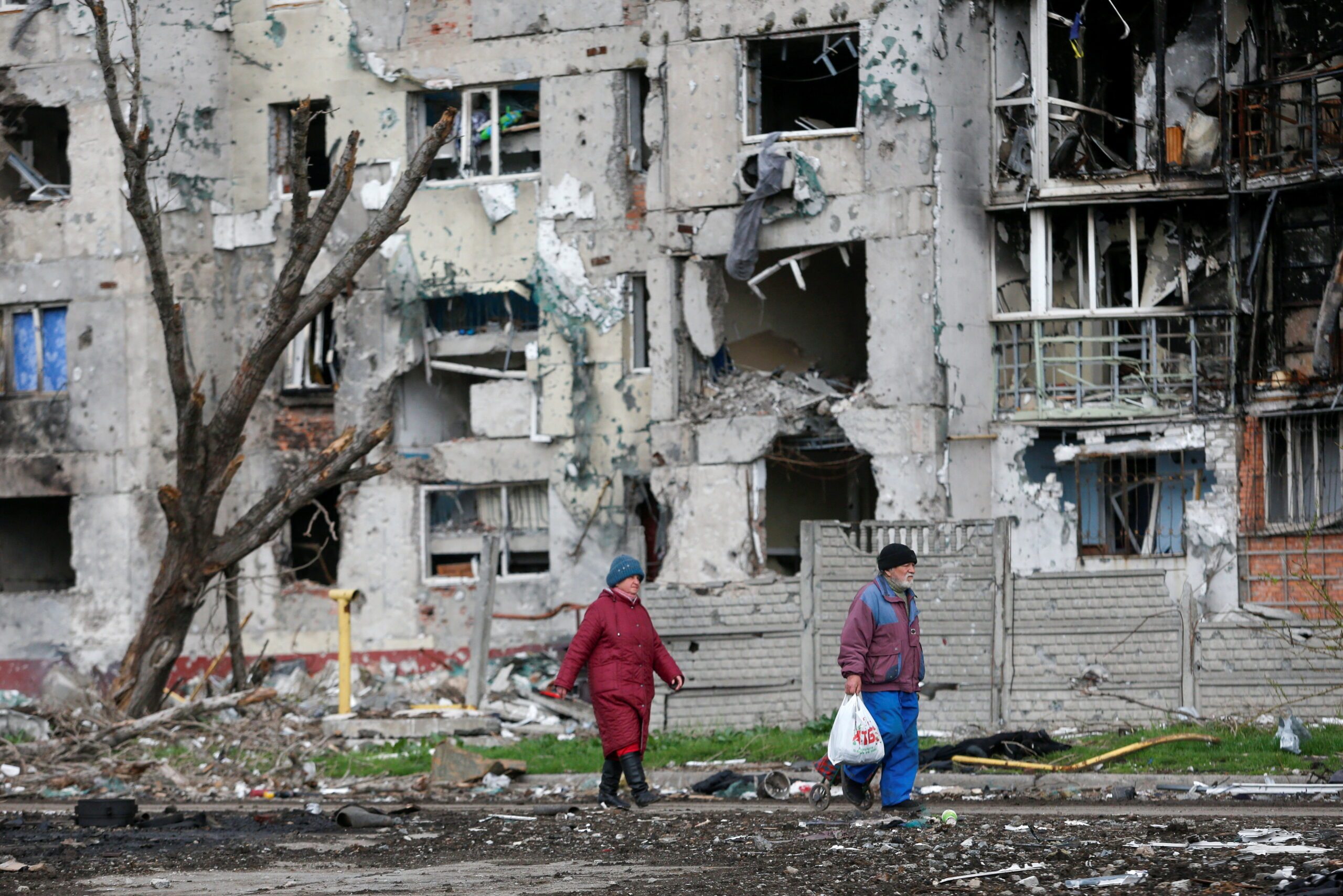 MARIUPOL. People walk near a residential building destroyed during Ukraine-Russia conflict in the southern port city of Mariupol, Ukraine on April 22, 2022.

Facebook Twitter Copy URL
Copied
(1st UPDATE) Ukraine estimates tens of thousands of civilians have died in Russia's siege of the city and says 100,000 civilians are still there and need full evacuation

KYIV/MARIUPOL, Ukraine – Ukrainian forces were pulling back from some settlements to regroup as an intensifying barrage pounded all cities in Luhansk region, its governor said on Saturday, April 23, with Russia pressing its offensive in the east.

The pullback to new defensive lines was to preserve units, the governor, Serhiy Gaidai, added in televised remarks.

“It’s unpleasant they’re leaving our settlements, but it is no catastrophe,” he added.

Ukraine’s military said in updates on Friday and early Saturday that Russia was trying to establish full control of the Donetsk and Luhansk regions and secure a land connection to Crimea, and was partially blockading the northeastern city of Kharkiv.

Russia annexed Crimea in 2014 and before its February 24 invasion, Russian-backed separatists controlled parts of Donetsk and Luhansk, which make up the Donbas. A Russian general said on Friday that Moscow wanted full control of Donbas and also southern Ukraine, suggesting wider Russian aims than previously acknowledged.

Russia has said it is conducting a “special military operation” to demilitarize Ukraine and liberate its population from dangerous nationalists. Ukraine and its Western allies call the invasion an unjustified war of aggression.

Russia said on Saturday it had shot down a Ukrainian fighter jet and destroyed three Ukrainian helicopters at an airfield in Kharkiv, a heavily bombarded city northwest of Donbas.

There was no immediate reaction from Ukraine regarding the Russian claims but the Ukrainian military said on Saturday it had destroyed 177 Russian aircraft and 154 helicopters since the start of the war.

Reuters could not independently verify the claims.

Russian forces made no major gains in the last 24 hours, British military intelligence said on Saturday.

Declaring victory in the biggest battle of the conflict so far, Russia said this week it had captured the southern port city of Mariupol and “securely blockaded” remaining Ukrainian troops who have been holed up in a huge steel works there.

Russian forces besieged and bombarded Mariupol – home to 400,000 people before the war – for weeks, leaving a city in ruins. Ukraine estimates tens of thousands of civilians have died and says 100,000 civilians are still there. The United Nations and Red Cross say the civilian toll is at least in the thousands.

Satellite imagery from near Mariupol showed a second cemetery had been expanded in late March and early April at Vynohradne, with long new trenches likely to become new grave sites, the US’ Maxar Technologies said on Friday.

The company had said on Thursday its imagery had located a separate burial site in another location near the city with more than 200 graves.

Ukrainian President Volodymyr Zelenskiy warned that Russia’s invasion of his country was just the beginning and that Moscow has designs on capturing other countries after a Russian general said it wants full control over southern Ukraine.

“All the nations that, like us, believe in the victory of life over death must fight with us. They must help us, because we are the first in line. And who will come next?” Zelenskiy said in a video address late on Friday, April 22.

Rustam Minnekayev, deputy commander of Russia’s central military district, was quoted by Russian state news agencies as saying full control over southern Ukraine would give it access to Transnistria, a breakaway Russian-occupied part of Moldova in the west.

That would cut off Ukraine’s entire coastline and mean Russian forces pushing hundreds of miles west beyond current lines, past the major Ukrainian coastal cities of Mykolaiv and Odesa.

Moscow, it said, had now “acknowledged that the goal of the ‘second phase’ of the war is not victory over the mythical Nazis, but simply the occupation of eastern and southern Ukraine. Imperialism as it is.”

Russia says it is conducting a “special military operation” to demilitarize Ukraine and liberate its population from dangerous nationalists. Ukraine and its Western allies call Russia’s invasion an unjustified war of aggression.

Moldova’s foreign ministry said it had summoned Moscow’s ambassador on Friday to express “deep concern” about the general’s comments. Moldova was neutral, it said.

Moldova last month formally applied to join the European Union, charting a pro-Western course hastened by Russia’s invasion. Its president, Maia Sandu, said on Twitter that on Friday Moldova had submitted its first questionnaire for EU membership as it sought “a better, safer, and more prosperous future.”

US State Department spokesperson Jalina Porter declined specific comment on Minnekayev’s statement but said Washington firmly supported Moldova’s sovereignty and was “clear-eyed” about events on the ground. “No one should be fooled by the Kremlin’s announcements,” Porter said.

Kremlin spokesman Dmitry Peskov declined to comment when asked if Russia had expanded the goals of its operation and how Moscow saw the political future of southern Ukraine.

As US Secretary of State Antony Blinken met with Ukrainian Prime Minister Denys Shmyhal in Washington, Zelenskiy said allies were finally delivering the weapons Kyiv had asked for.

US President Joe Biden said on Thursday, April 21, he had authorized a further $800 million in military aid for Ukraine, including heavy artillery, ammunition and tactical drones. Canada said on Friday it had provided more heavy artillery to Ukraine, following up on a pledge earlier this week.

A senior EU official said the next couple of weeks would likely be decisive.

“This is not a fairy tale with an imminent happy ending,” he told reporters. “We are likely to see a very significant increase in the intensity of Russian military attacks in the east (and) the coast.”

Ukraine’s military said Russian forces had increased attacks along the frontline in the east and were attempting an offensive in the Kharkiv region, north of their main target, the Donbas.

Ukrainian military commands in the south and east said they had repelled 11 Russian attacks, killing up to 130 soldiers while destroying 12 tanks and 27 other armoured vehicles, details Reuters could not independently confirm.

Russia’s defense ministry said its forces had captured a large arms depot in the Kharkiv region. It also reported hitting dozens of targets in the Donetsk and Kharkiv regions on Friday.

In Geneva, the United Nations human rights office said there was growing evidence of Russian war crimes, including indiscriminate shelling and summary executions. It said Ukraine also appeared to have used weapons with indiscriminate effects.

Russia denies targeting civilians and says, without evidence, that signs of atrocities committed by its soldiers were faked. Ukraine has previously said it will punish any soldiers found to have committed war crimes.

Russia’s defense ministry said thousands of Ukrainian troops holed up in a huge steel works in Mariupol, the main port of the Donbas, were “securely blockaded”, a day after President Vladimir Putin said the army would not bother rooting them out.

Putin has declared victory in the city after a nearly two-month siege. In a Russian-held section of Mariupol, the guns had largely fallen silent and dazed-looking residents ventured out this week to a background of charred apartment blocks and wrecked cars.

Volunteers in white hazmat suits and masks roved the ruins, collecting bodies from apartments and loading them on to a truck marked with the letter “Z,” symbol of Russia’s invasion.

Ukraine estimates tens of thousands of civilians have died in Russia’s siege of the city and says 100,000 civilians are still there and need full evacuation.

Ukrainian Deputy Prime Minister Iryna Vereshchuk on Friday said “there is a possibility” a humanitarian corridor out of Mariupol could be opened up on Saturday.

In Lviv, Sofia Telehina said her grandmother in Mariupol had cried constantly when they last spoke by phone and said everything was bombed to pieces. “Since then I’ve not been able to reach her,” she said.

The Pentagon said more than 20 countries would attend US- hosted defense talks in Germany next week to consider Ukraine’s long-term defence relationships once the war is over. – Rappler.com