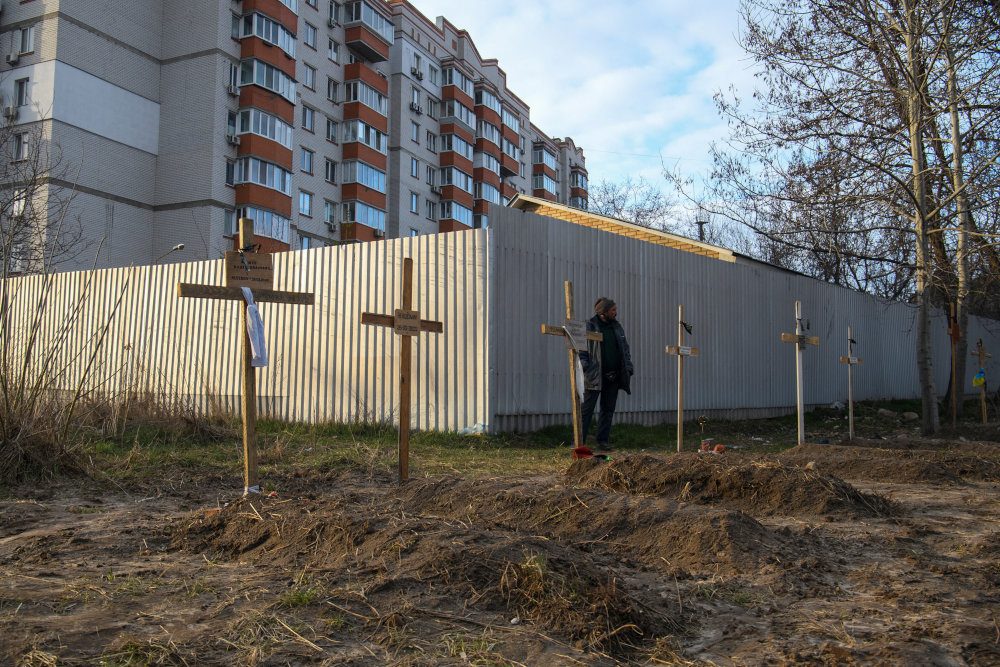 GRAVES IN BUCHA. A man stands next to graves with bodies of civilians, who according to local residents were killed by Russian soldiers, as Russia's attack on Ukraine continues, in Bucha, in Kyiv region, Ukraine April 4, 2022.

The European Union’s executive proposed sweeping new sanctions against Russia on Tuesday, April 5, including a ban on coal imports, as the West responds to evidence of civilian killings in a Ukrainian town seized from Russian invaders.

The proposed sanctions, which EU member states must approve, would bar Russian imports worth 9 billion euros and exports to Russia worth 10 billion euros, including semiconductors and computers, and stop Russian ships entering EU ports.

“We all saw the gruesome pictures from Bucha and other areas from which Russian troops have recently left. These atrocities cannot and will not be left unanswered,” she said on Twitter.

The announcement came hours after Kyiv’s mayor Vitali Klitschko called for all business ties with Russia to be cut, halting the flow of “bloody money.”

Since the Russian assault shifted from northern Ukraine to the south and east, grim images have emerged from the town of Bucha near Kyiv, including a mass grave and bound bodies of people shot at close range, prompting calls for tougher action against Moscow and an international investigation.

Several European countries, including Germany, France and Italy, have announced expulsions of Russian diplomats and Moscow said it would respond in kind.

Russia, which says it launched a “special military operation” in Ukraine on February 24 to demilitarize and “denazify” its neighbor, denies targeting civilians and said the deaths were a “monstrous forgery” staged by the West to discredit it.

Sanctions have isolated and crippled Russia’s economy, but Ukraine says the West needs to do much more to starve Moscow’s war machine.

“Every euro, every cent that you receive from Russia or that you send to Russia has blood, it is bloody money and the blood of this money is Ukrainian blood, the blood of Ukrainian people,” Klitschko told a conference in Geneva via video link.

Europe, which gets about a third of its natural gas needs from Russia, has been wary of the economic impact a total ban on Russian energy – which Ukraine says is needed to force a peace deal – would bring.

A ban on Russian coal by the 27-nation European Union would be worth around 4 billion euros a year, von der Leyen said – tiny in comparison with last year’s 100 billion euros in oil and gas imports from Russia.

But signaling EU’s strengthening resolve, German Foreign Minister Annalena Baerbock said the coal ban was the first step towards a total ban on all fossil fuel imports from Russia.

He described a remark by US President Joe Biden that Putin should be tried for war crimes as unacceptable and unworthy.

Ukraine’s president Volodymyr Zelenskiy said his country, which accuses Russia of genocide, had no choice but to negotiate to end the war, now in its sixth week, which has killed thousands, sent millions fleeing and turned cities into rubble.

“All of us, including myself, will perceive even the possibility of negotiations as a challenge,” Zelenskiy said in a television interview. He said it was not clear whether he and Putin would speak directly.

Zelenskiy said at least 300 civilians had been killed in Bucha and that many more dead were likely to be found in other areas. He said he would address the United Nations Security Council on Tuesday as he builds support for an investigation into the killings. (LIVE UPDATES: Russia-Ukraine crisis)

Russia denied that its forces had carried out any atrocities and said it would present “empirical evidence” to the UN Security Council meeting proving its forces were not involved.

At the weekend, Reuters reporters in Bucha saw several bodies apparently shot at close range, along with makeshift burials and a mass grave, but could not independently verify the number of dead or who was responsible.

Satellite images taken in March and provided to Reuters by US company Maxar Technologies showed bodies of civilians on a street in Bucha, which was occupied by Russian forces until about March 30, undercutting claims that the scenes were staged. Battles in the east

Ukraine said it was bracing for about 60,000 Russian reservists to be called in to reinforce Moscow’s offensive in the east, where Russia’s main targets have included the port of Mariupol and Kharkiv, the country’s second-largest city.

“Russian troops have attacked Mykolayiv with cluster munitions banned by the Geneva Convention. Whole blocks of civilian buildings have come under fire, in particular, a children’s hospital. There are dead and wounded, including children,” the general staff said in a daily update on Tuesday.

Reuters could not independently verify the claims. – Rappler.com