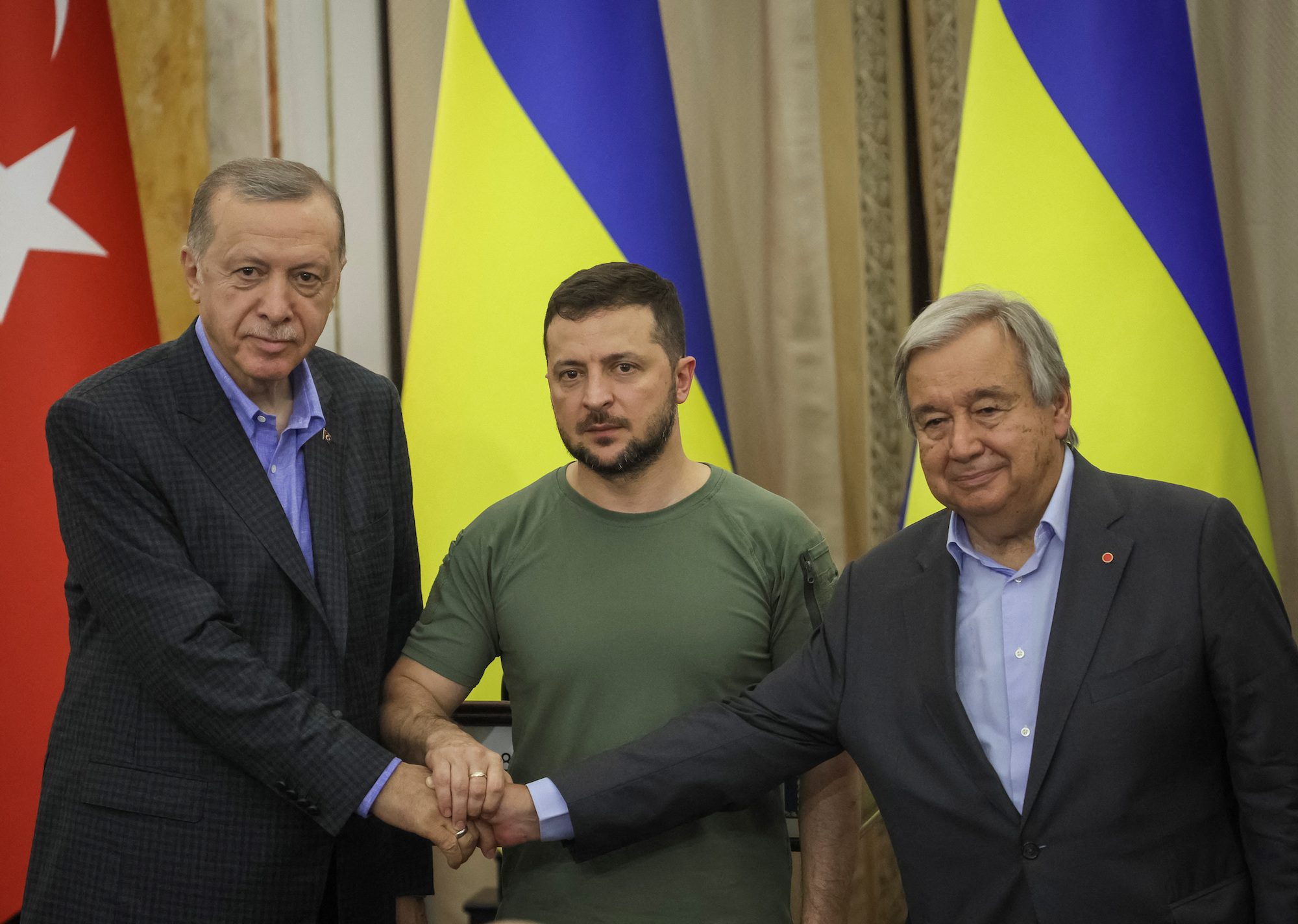 The UN chief and the presidents of Turkey and Ukraine on Thursday, August 18, discussed ways to end Kyiv’s conflict with Russia and secure Europe’s largest nuclear power station, which has come under shelling at the front lines.

UN Secretary-General Antonio Guterres told reporters after talks in Lviv, Ukraine, on Thursday he was gravely concerned about circumstances at the Zaporizhzhia nuclear plant and called for military equipment and personnel to be withdrawn.

In a deal brokered by the United Nations and Turkey, Russia and Ukraine reached an agreement in July for Russia to lift a blockade of Ukrainian grain shipments, and exports resumed at the beginning of August.

NATO member Turkey has maintained good relations with Russia, an important trade partner, and sought to mediate in the conflict, which began six months ago when Russian forces invaded neighboring Ukraine.

“Personally, I maintain my belief that the war will ultimately end at the negotiating table. Mr Zelenskiy and Mr Guterres have the same opinion in this regard,” Erdogan said.

At the same time, US President Joe Biden’s administration is readying about $800 million of additional military aid to Ukraine and could announce it as soon as Friday, August 19, three sources familiar with the matter said

Meanwhile, 17 people were killed and 42 injured in two separate Russian attacks on the major northeastern Ukrainian city of Kharkiv, the regional governor said on Thursday.

Also on Thursday, at least four explosions hit near a major Russian military airport on the Moscow-controlled Crimean peninsula, three local sources said. Ukraine has hinted it orchestrated other blasts over the last 10 days at other Russian installations in Crimea.

The sources said Thursday’s explosions were near Russia’s Belbek military airport, north of the Black Sea fleet’s headquarters in Sevastopol.

The general staff of the Ukrainian armed forces said in a statement on Friday that Russian forces had launched attacks and tried to make advances on three or more fronts in the course of the day and that Ukrainian forces had repelled them.

In the south, 73 Russian soldiers were killed and 13 pieces of equipment and ammunition depots were destroyed as Ukrainian forces sought to take control of new territory, the regional command said on Facebook.

“In the course of the ensuing battle, (our) units fired on the enemy, which, as a result, was obliged to return to its original position with losses of tanks, armored vehicles and personnel.”

Reuters could not immediately versify the battlefield accounts.

Moscow says its aim in Ukraine is to demilitarize the country and protect Russian-speakers on land that Russian President Vladimir Putin says historically belongs to Russia.

Ukraine and the West call it an unprovoked war of conquest. Ukraine shook off Russian domination when the Soviet Union broke up in 1991.

Guterres reiterated calls for demilitarization around the nuclear plant.

“The facility must not be used as part of any military operation. Instead, agreement is urgently needed to re-establish Zaporizhzhia’s purely civilian infrastructure and to ensure the safety of the area,” Guterres said.

Russia, which captured Zaporizhzhia soon after its February 24 invasion of Ukraine, said it could shut down the facility – a move Kyiv said would increase the risk of a nuclear catastrophe.

Moscow had earlier rejected as “unacceptable” international calls for a demilitarized zone around the nuclear plant, which is still operated by Ukrainian engineers under Russian occupation.

The power station sits on the Russian-controlled south bank of a huge reservoir; Ukrainian forces hold the north bank. Recent days have seen several incidents of shelling at the plant, which both sides blame on each other.

Ukraine also accuses Russia of using the plant as a shield for its forces to launch strikes across the reservoir on Ukrainian-held cities, which Moscow denies.

Reuters cannot independently confirm the military situation in the area or responsibility for shelling.

Zelenskiy said after meeting Guterres that they had agreed parameters of a possible mission of the International Atomic Energy Agency to the plant.

“Russia should immediately and unconditionally withdraw its forces from the territory of Zaporizhzhia nuclear power plant, as well as stopping any provocations and shelling,” he said.

Moscow says its aim in Ukraine is to demilitarize the country and protect Russian-speakers on land that Russian President Vladimir Putin says historically belongs to Russia.

Kyiv and the West call it an unprovoked war to conquer Ukraine and erase its thousand-year national identity.

Russia has used Crimea, which it seized from Ukraine in 2014, to reinforce its troops fighting in other parts of Ukraine with military hardware, a process Kyiv is keen to disrupt ahead of a potential counter-offensive in southern Ukraine.

Ukraine has not officially claimed responsibility for a recent series of blasts in Crimea. Last week Moscow’s Saki air base was devastated by a series of explosions that destroyed eight warplanes, according to satellite imagery.

Russia said this resulted from an accident, but Kyiv officials suggested it was part of a special operation.

Separately, blasts rocked an ammunition depot on Tuesday at a Russian military base in the north of the Crimean peninsula.

Russian state media speculated that saboteurs may have used small drones to bomb the ammunition depot.

Ukrainian presidential adviser Mykhailo Podolyak said this week that Ukraine’s strategy was to destroy Russian “logistics, supply lines and ammunition depots and other objects of military infrastructure. It’s creating a chaos within their own forces.” – Rappler.com