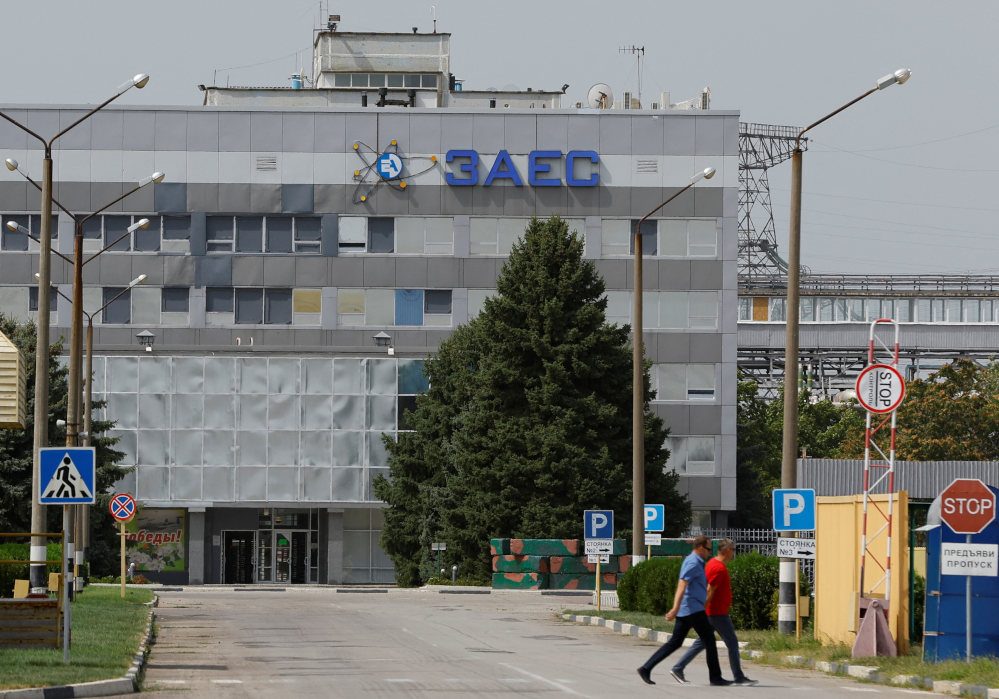 POWER PLANT. A view shows the building of the Zaporizhzhia Nuclear Power Plant in the course of Ukraine-Russia conflict outside the Russian-controlled city of Enerhodar in Zaporizhzhia region, Ukraine on August 22, 2022.

KYIV, Ukraine (Reuters) – As Ukraine prepared to mark both its independence from Soviet-rule in 1991 and the six months since Russian troops invaded, President Volodymyr Zelenskiy pledged that any Russian attacks in or around the date would provoke a powerful response.

Zelenskiy, who has led his country’s resistance since Russian troops poured over the border on February 24, also said Ukraine would restore its rule over the Crimea region – annexed by Russia in 2014 in a precursor to this year’s invasion.

Despite his defiance, there was concern among Ukrainian and allied Western officials that Russia was preparing to attack the capital Kyiv once again.

The United States said it believed Russia would target civilian and government infrastructure in the next few days.

US citizens should leave Ukraine “now” by their own means if it was safe to do so, the US Embassy said.

On the battlefields, Russian forces carried out artillery and rocket strikes in the Zaporizhzhia region in southeastern Ukraine, where fighting has taken place near Europe’s largest nuclear power plant, Ukraine’s military said. Russia and Ukraine have blamed each other for strikes on the plant.

Meanwhile leaders of dozens of countries and international organizations were taking part in the so-called Crimea Platform most of them by video – in solidarity with Ukraine on the six-month anniversary of the invasion.

Opening the forum, Zelenskiy, dressed in his customary military gear, told delegates: “To overcome terror, it is necessary to gain victory in the fight against Russian aggression.”

“It is necessary to liberate Crimea. This will be the resuscitation of world law and order,” he said.

Italy’s acting Prime Minister Mario Draghi told the summit Rome would continue to support Ukraine. “We are with you in your fight to resist Russia’s invasion, restore Ukraine’s territorial integrity, protect your democracy and independence,” he said.

Earlier, Zelenskiy had warned that Moscow might try “something particularly ugly” in the run-up to Wednesday’s Independence Day. Asked at a news conference with visiting Polish President Andrzej Duda about the possibility of a Russian missile strike on Kyiv, Zelenskiy said there was a daily threat of attacks although the number of them could increase. Ukraine’s response would be the same for any city that comes under attack from Russia, he said.

“They will receive a response, a powerful response,” Zelenskiy said. “I want to say that each day … this response will grow, it will get stronger and stronger.”

Fears of intensified Russian attacks followed the killing of Darya Dugina, the daughter of a prominent Russian ultra-nationalist, in a car bombing near Moscow on Saturday. Moscow blamed the killing on Ukrainian agents, a charge Kyiv denies.

Kyiv has only rarely been hit by Russian missiles since Ukraine repelled a ground offensive to seize the capital in March.

The mood in Kyiv was calm on Tuesday, with many people still walking the streets, but signs of increased threat could be felt. An adviser to Zelenskiy told the BBC many civilians were trying to leave Kyiv for fear of a sudden Russian attack.

The Kyiv city administration banned large public gatherings until Thursday, fearing that a crowd of celebrating residents could become a target for a Russian missile strike.

Russia sent its troops over the border in what it calls a “special military operation” saying it wanted to demilitarize its neighbor and protect Russian-speaking communities. Ukraine and its Western allies accuse Moscow of waging an unjustified, imperial-style war of aggression.

Six months on from the Russian invasion, which has caused thousands of deaths, forced over a third of Ukraine’s 41 million people from their homes and destroyed whole cities, the conflict is largely locked in a stalemate.

Russian forces control a large swathe of the south, including along the Black Sea and Sea of Azov coasts, and chunks of the eastern Donbas region. The prospects for peace look almost non-existent.

“We feel good, trusting that victory will be on our side, only ours, there is no other option,” Yevhen, a Ukrainian soldier, said as his frontline unit fired off several howitzer shells towards Russian positions from a field in the Donbas.

Russian shelling hit Kharkiv in the northeast – Ukraine’s second largest city – around dawn on Tuesday, regional governor Oleh Synehubov said. A house was hit but no one hurt, he said.

In the south, Ukraine’s southern military command said Russian forces pressed attacks along front lines of areas they occupy, including multiple rocket strikes on the town of Marhanets across the Dnipro River from the Russian-held Zaporizhzhia nuclear power plant. Two civilians were hurt and several homes, gas and water pipelines were damaged, it said.

It added that Ukrainian rockets and artillery had destroyed an ammunition depot and command post of a Russian airborne assault regiment in Chernobaevka in the Russian-occupied Kherson region, southwest of Zaporizhzhia.

Artillery and rocket fire near the nuclear reactor complex, has stirred international calls for the area to be
demilitarized. – Rappler.com