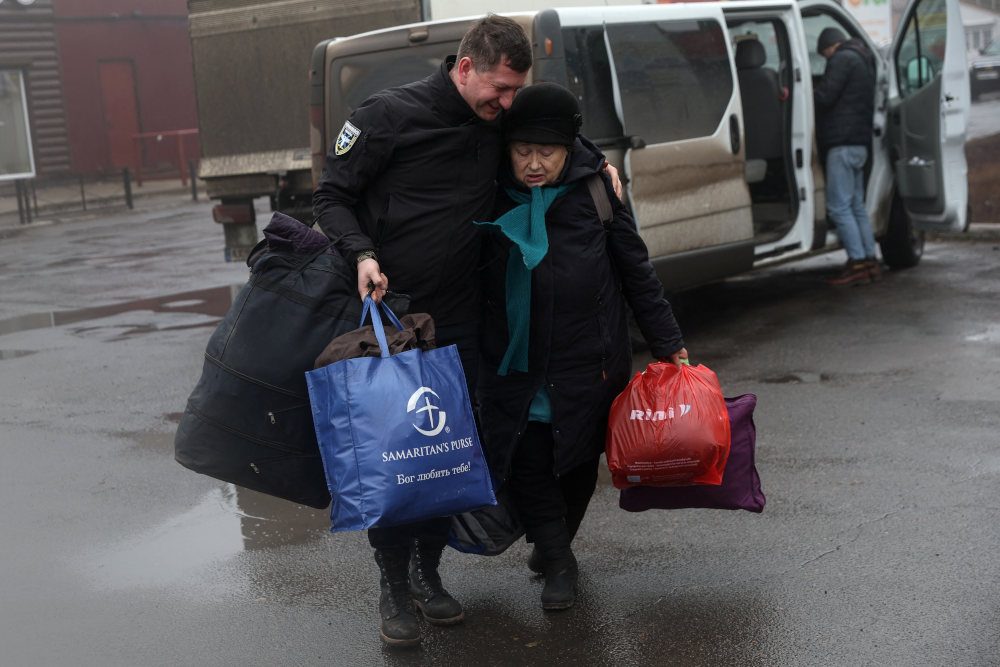 BAKHMUT EVACUATION. Valentyna, 70, walks with Leonid, a member of the volunteer organization Chaplain Patrol, as she arrives at the Pokrovsk train station after being evacuated from Bakhmut, en route to meet her son in Kyiv, Ukraine, on December 13, 2022.

There are no peace talks under way to end the conflict, which has killed thousands, displaced millions and turned cities to ruins. Ukrainian President Volodymyr Zelenskiy called on Russia this week to start withdrawing by Christmas as the first step towards a peace deal.

The Kremlin said on Wednesday a “Christmas ceasefire” was not on the agenda.

In one Kyiv district, residents said they heard the sound of an Iranian Shahed drone – known as “mopeds” by Ukrainians because of the loud whirring of their engines – followed by a powerful explosion at a building next to their homes.

“I was already in the kitchen – I heard everything – I heard the buzzing ‘moped’ and I ran into the bathroom,” said Yana, 39, who had been getting ready for work.

“I want this all to be over… For (Russian President Vladimir) Putin, that bastard, to die. Those are the only
emotions.”

One attack appeared to have ripped through a chunk of the roof of a nearby walled-off brick building. It was unclear what the building was used for.

Some of the windows of nearby residential buildings had been smashed. Bits of the roof were strewn in the snow along with other debris. Shocked residents, wrapped up against the cold, inspected the damage.

They said no one appeared to have been hurt.

The white tail of a drone could be seen in the wreckage. It had M529 Geran-2 written on it and a handwritten message “For Ryazan!!!”, an apparent reference to what Moscow says was a
Ukrainian attack on an airstrip deep inside Russia this month.

Russia, which invaded Ukraine on February 24 in what it calls a “special military operation” to “denazify” its neighbor, has unleashed barrages of missile attacks on energy infrastructure since October. Ukraine’s grid operator said energy facilities had not sustained any damage in Wednesday’s attack.

Ukrainian air force spokesperson Yuriy Ihnat said the attack was deliberately timed for when it was dark to make it harder to shoot the drones down.

“The air defenses worked well.” he said. “Thirteen (drones) were shot down.”

Ukraine has already received air defense systems from the West, including from the United States. The Patriot is considered one of the most advanced.

US officials told Reuters an announcement on a decision on providing the system could come as soon as Thursday.

The Kremlin said on Wednesday that US Patriot missile defense systems would be a legitimate target for Russian strikes against Ukraine if Washington authorized their delivery to Kyiv.

In the past 24 hours, it said, in the regions of Kharkiv, Donetsk and Zaporizhzhia “the enemy launched 1 air and 11 missile strikes, 3 of them on civilian infrastructure… (and) launched more than 60 attacks from multiple rocket launchers”.

And Russian shells hit the regional administration building on the central square of the recently liberated southern city of Kherson, the deputy head of Ukraine’s presidential office said.

After a series of lightning Ukrainian counter-offensives which has seen Kyiv regain control over around half of the territory Moscow captured in the first weeks of the war, neither side has made significant territorial gains in the past month.

Military analysts say a winter deadlock could set in, even as fierce fighting continues, especially in the Donetsk region, where Russian forces are pushing to capture the town of Bakhmut.

Zelenskiy’s office said the president and military officials discussed moves to ensure border security at a meeting of the supreme command on Wednesday.

The talks came a day after Moscow ally Belarus announced an increased combat readiness in the south of the country. Russia used Belarus as a launch pad for its invasion of Ukraine.

Millions of civilians enduring Europe’s biggest conflict since World War Two have had to contend with cuts to power, heat and water as sub-zero temperatures take hold.

Sergey Kovalenko, the head of the YASNO power company, said on Facebook that repairs continued on the electricity grid but that Kyiv still only had two-thirds of the power it needed.

A US citizen was among dozens of detainees handed over to Ukraine in a prisoner exchange with Russia, the head of Ukraine’s presidential administration said on Wednesday.

Andriy Yermak wrote on the Telegram messaging app that Suedi Murekezi had been “helping our people” before ending up in Russian custody. – Rappler.com