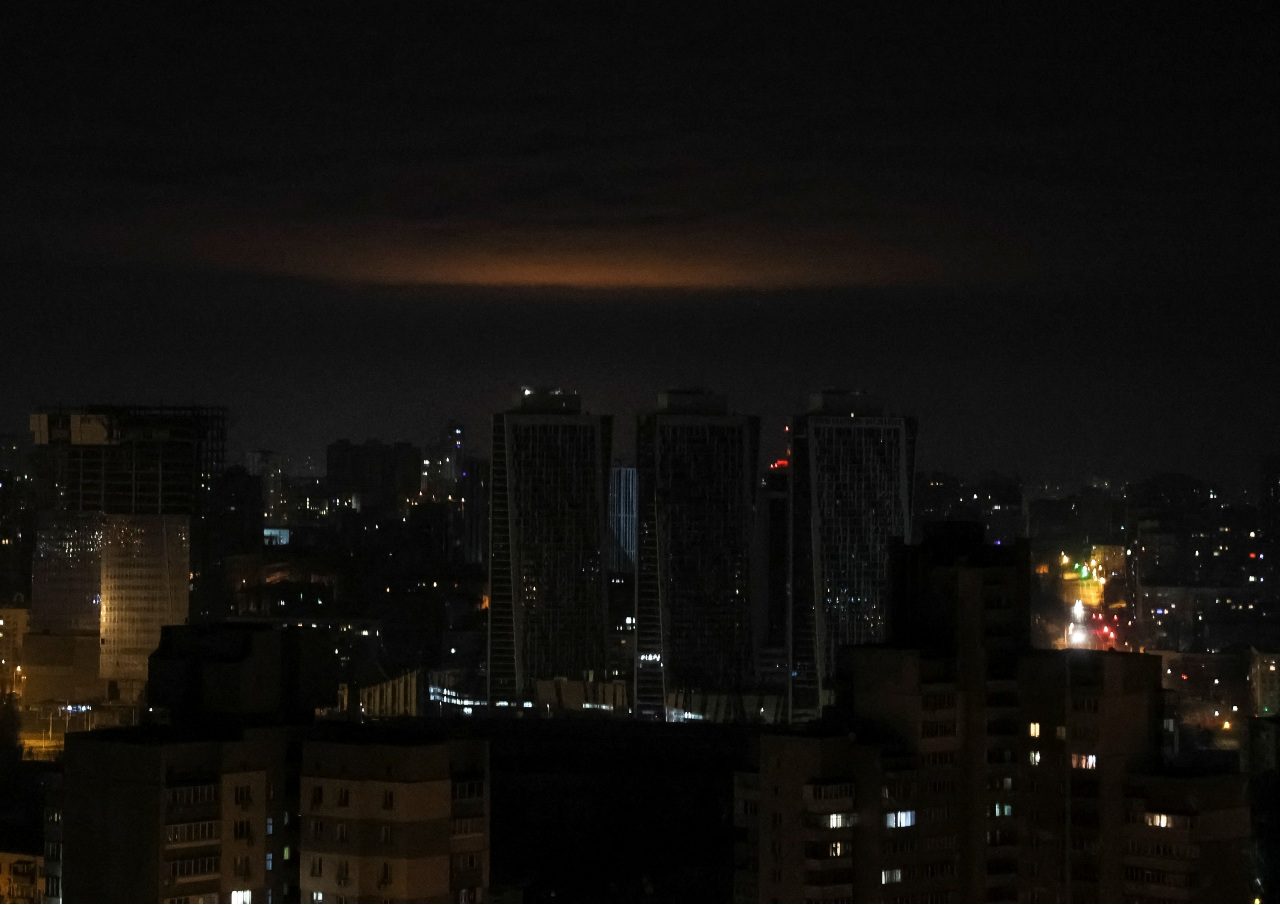 NEW YEAR. A glow from explosion is seen over the city's skyline during a Russian drones strike, amid Russia's attack on Ukraine, in Kyiv, Ukraine, on January 1, 2023.

KYIV, Ukraine – Russia acknowledged on Monday, January 2, that scores of its troops were killed in one of the Ukraine war’s deadliest strikes, drawing demands from nationalist bloggers for commanders to be punished for housing soldiers alongside an ammunition dump.

Russia’s defence ministry said 63 soldiers had died in the fiery blast which destroyed a temporary barracks in a former vocational college in Makiivka, twin city of the Russian-occupied regional capital of Donetsk.

It said the accommodation had been hit by four rockets fired from US-made HIMARS launchers, claiming two rockets had been shot down. Kyiv said the Russian death toll was in the hundreds, though pro-Russian officials called this an exaggeration.

Russian military bloggers, many with hundreds of thousands of followers, said the huge destruction was a result of storing ammunition in the same building as a barracks, despite commanders knowing it was within range of Ukrainian rockets.

Separately, Ukraine said on Monday it had shot down all 39 drones Russia had launched in an unprecedented third straight night of air strikes against civilian targets in Kyiv and other cities.

Ukrainian officials said their success proved that Russia’s tactic in recent months of raining down air strikes to knock out Ukraine’s energy infrastructure was increasingly a failure as Kyiv beefs up its air defences.

‘Each mistake has a name’

Unverified footage posted online of the aftermath of the Makiivka strike on the Russian barracks showed a huge building reduced to smoking rubble.

Igor Girkin, a former commander of pro-Russian troops in east Ukraine who has emerged as one of the highest profile Russian nationalist military bloggers, said the death toll was in the hundreds, later editing his post to include wounded in that figure. Ammunition had been stored at the site and Russian military equipment there was uncamouflaged, he said.

Another nationalist blogger, Rybar, said around 70 soldiers were confirmed dead and more than 100 wounded.

“What happened in Makiivka is horrible,” wrote Archangel Spetznaz Z, another Russian military blogger with more than 700,000 followers on Telegram.

“Who came up with the idea to place personnel in large numbers in one building, where even a fool understands that even if they hit with artillery, there will be many wounded or dead?” he wrote. Commanders “couldn’t care less” about ammunition stored in disarray on the battlefield, he said.

“Each mistake has a name.”

Russia’s acknowledgement of scores of deaths in one incident was almost without precedent. Moscow rarely releases figures for its casualties, and when it does the figures are typically low – it acknowledged just one death from among a crew of hundreds when Ukraine sank its flagship cruiser Moskva in April.

Russia has seen in the new year with nightly attacks on Ukrainian cities, including Kyiv, hundreds of kilometers from the front lines. The nightly attacks mark a change in tactics, after months in which Moscow usually spaced such strikes around a week apart.

After firing dozens of missiles on Saturday, December 31, 2022, Russia launched dozens of Iranian-made Shahed drones on Sunday, January 1 and Monday, January 2, 2023. But Kyiv said on Monday it had shot down all 39 drones in the latest wave, including 22 shot down over the capital.

Kyiv said the new tactic was a sign of Russia’s desperation as Ukraine’s ability to defend its air space had improved.

“Now they are looking for routes and attempts to hit us somehow, but their terror tactics will not work. Our sky will turn into a shield,” presidential chief of staff Andriy Yermak said on Telegram.

In his latest nightly speech, President Volodymyr Zelenskiy praised Ukrainians for showing gratitude to the troops and one another and said Russia’s efforts would prove useless.

“Drones, missiles, everything else will not help them,” he said of the Russians. “Because we stand united. They are united only by fear.”

Ukraine’s air defence systems worked through the night to bring down incoming drones and to warn communities of the approaching danger.

“It is loud in the region and in the capital: night drone attacks,” Kyiv Governor Oleksiy Kuleba said.

Russia has turned to mass air strikes against Ukrainian cities since suffering humiliating defeats on the battlefield in the second half of 2022.

It says its attacks, which have knocked out heat and power to millions in winter, aim to reduce Kyiv’s ability to fight. Ukraine says the attacks have no military purpose and are intended to hurt civilians, a war crime.

Ukraine has fought back with Western military support, driving Russian forces from more than half the territory they seized. In recent weeks, the front lines have been largely static, with thousands of soldiers dying in intense warfare.

In a stern New Year’s Eve message filmed in front of a group of people dressed in military uniform, Putin vowed no let-up in his war.

“The main thing is the fate of Russia,” Putin said. “Defence of the fatherland is our sacred duty to our ancestors and descendants. Moral, historical righteousness is on our side.” – Rappler.com