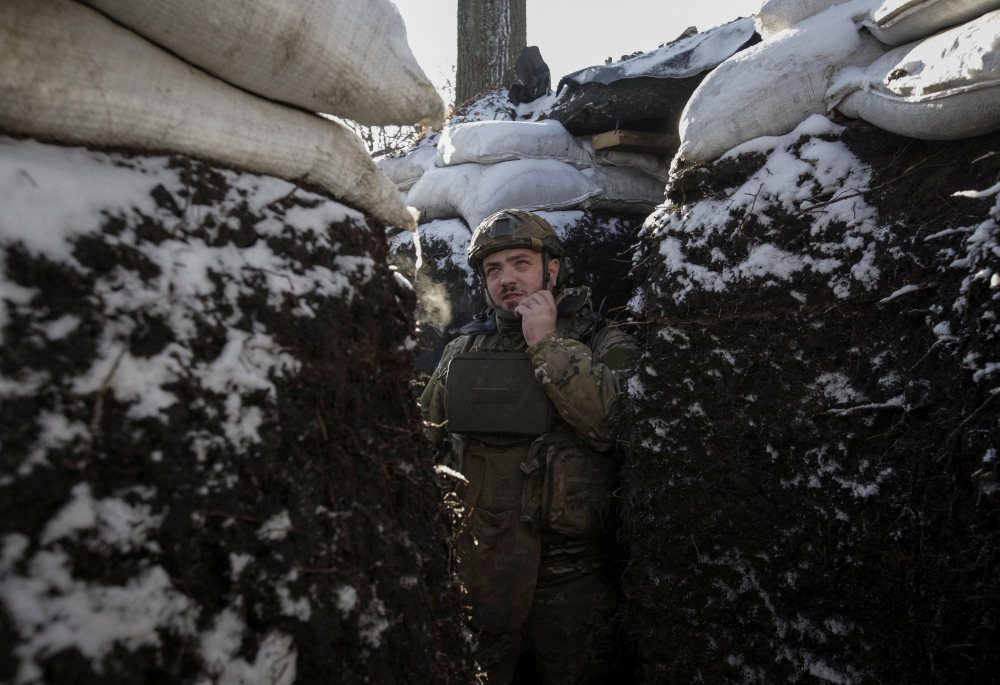 AT THE FRONTLINE. A Ukrainian serviceman stands in a trench at a frontline, amid Russia's attack on Ukraine, in Donetsk region, Ukraine January 7, 2023.

Ukrainian forces are repelling constant Russian attacks on Bakhmut and other towns in the eastern region of Donbas, Ukrainian authorities said on Monday, January 9, after denying Kremlin claims of 600 soldiers killed in a missile strike.

Russia launched seven missile strikes, 31 air strikes and 73 attacks from salvo rocket launchers in the past day, the general staff of Ukraine’s armed forces said in a daily report.

Ukrainian forces repelled attacks on 14 settlements, including Bakhmut, it added.

“Bakhmut is holding on despite everything,” President Volodymyr Zelenskiy said in nightly video remarks on Sunday.

“And even though most of the town has been destroyed by Russian strikes, our soldiers are repelling constant Russian attempts to advance.”

The nearby town of Soledar was holding on, “even though there is even greater destruction and things are very difficult”, he added.

Reuters was not able to independently verify the battlefield reports.

Zelenskiy made a fresh denunciation of what he called Russia’s failure to observe a truce it had proclaimed for Orthodox Christmas by staging attacks on Ukrainian cities.

“Russians were shelling Kherson with incendiary ammunition immediately after Christmas,” he said, referring to the southern city abandoned by Russian forces in November.

“Strikes on Kramatorsk and other cities in Donbas – on civilian targets and at the very time when Moscow was reporting a supposed ‘silence’ for its army.”

On Sunday, Russia said a missile attack on Kramatorsk, northwest of Bakhmut, had killed 600 Ukrainian soldiers, but a Reuters reporter at the scene found no obvious signs of casualties.

A Reuters team visited two college dormitories that Moscow said had been temporarily housing Ukrainian personnel and which it had targeted as revenge for a New Year’s attack that killed scores of Russian soldiers and caused outcry in Russia.

But neither dormitory in the eastern city of Kramatorsk appeared to have been directly hit or seriously damaged. There were no obvious signs that soldiers had been living there and no sign of bodies or traces of blood.

Serhiy Cherevatyi, a Ukrainian military spokesperson for the eastern region, described the claim of mass casualties as an attempt by the Russian defense ministry to show it had responded forcefully to Ukraine’s recent strikes on Russian soldiers.

“This is an information operation of the Russian defense ministry,” Cherevatyi told Ukrainian broadcaster Suspilne News.

As Moscow’s invasion of Ukraine grinds towards the one-year mark, Russia’s military is under domestic pressure to deliver battlefield successes.

Hawkish voices have sought an escalation of the war effort after setbacks such as loss of captured territory and high rates of death and injury.

“Let’s talk about ‘fraud’,” wrote one prominent pro-war military blogger on the Telegram messaging app, who posts under the name of Military Informant and who has more than half a million subscribers.

“It is not clear to us who, and for what reason, decided that 600 Ukrainian soldiers died inside, all at once, if the building was not actually hit (even the light remained on).

“Instead of the real destruction of the enemy personnel, which would have been a worthy response, an exclusively media operation of retaliation was invented.”

The militaries of both Russia and Ukraine militaries have often overstated enemy losses, while minimising their own.

Ukraine’s top military officials said last week some 760 Russian troops had been killed or wounded in two attacks on Moscow-controlled parts of the Kherson and Zaporizhzhia regions. These reports could not be independently verified. – Rappler.com