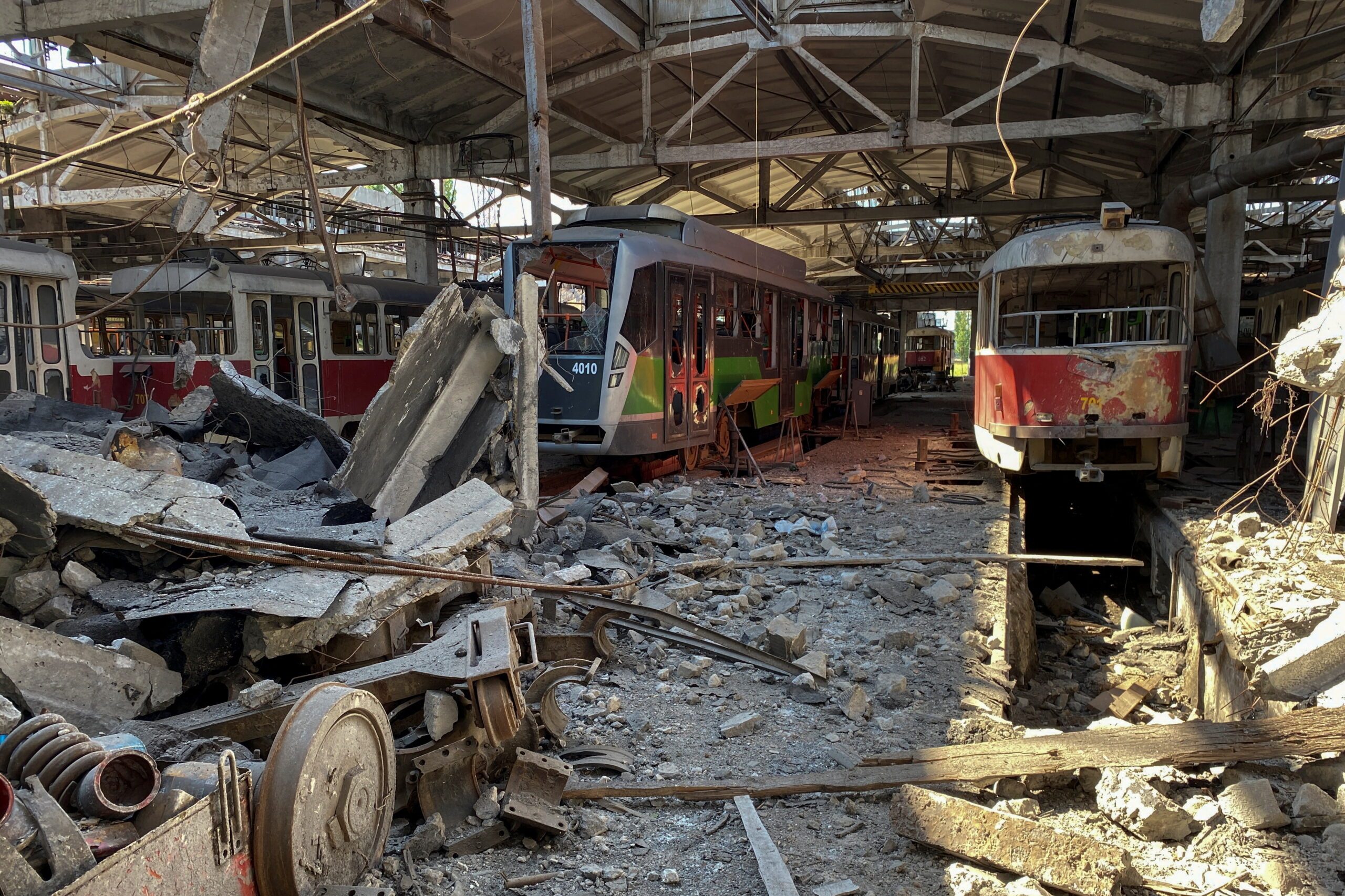 A view shows a tram depot destroyed by a Russian missile strike, as Russia's attack on Ukraine continues, in Kharkiv, Ukraine June 18, 2022.

KYIV, Ukraine – With a blessing for its European Union (EU) ambitions and a pledge of unwavering support from Britain, Ukraine vowed on Saturday, June 18, to prevail against Moscow as its troops battled the Russian assault on a pivotal eastern city and communities pounded by more heavy shelling.

EU leaders are expected at a summit next week to grant Ukraine candidate status following Friday’s recommendation from the bloc’s executive, putting Kyiv on course to realize an aspiration seen as out of reach before the invasion, even if actual membership could take years.

British Prime Minister Boris Johnson, who made a surprise visit to Kyiv on Friday, June 17, and offered training for Ukrainian forces, on Saturday stressed the need to keep supporting the country and avoid “Ukraine fatigue” after nearly four months of war.

On the battlefields, the industrial city of Sievierodonetsk, a prime target in Moscow’s offensive to seize full control of the eastern Luhansk region, remained under heavy Russian artillery and rocket fire, the Ukrainian military said on Saturday.

Ukrainian President Volodymir Zelenskiy, whose defiance has inspired Ukrainians and won him global respect, said on Saturday he had visited soldiers on the southern front line in the Mykolaiv region, offering a fresh message of hope on his return.

A video posted on his account showed Zelenskiy in his trademark khaki t-shirt handing out medals and posing for selfies with the servicemen. Zelenskiy did not say when the trip took place.

Ukrainian authorities reported overnight shelling of multiple locations in the eastern regions of Luhansk and Kharkiv and further west in Poltava and Dnipropetrovsk. Early on Saturday, Russian rockets rained on a suburb of Kharkiv, Ukraine’s second-largest city, hitting a municipal building and starting a fire in a block of flats, but causing no casualties, a regional governor said.

Moscow denies targeting civilians in what it terms a “special military operation” to disarm Ukraine and protect Russian speakers there from dangerous nationalists. Kyiv and its allies dismiss this as a baseless pretext for war.

“The Russians are grinding forward inch by inch and it is vital for us to show what we know to be true which is that Ukraine can win and will win,” Johnson told reporters on his arrival back in Britain from Kyiv.

“When Ukraine fatigue is setting in, it is very important to show that we are with them for the long haul,” he said.

One of President Vladimir Putin’s goals, when he ordered thousands of troops into Ukraine on February 24, was to halt the eastward expansion of the NATO military alliance and keep its southern neighbor outside of the West’s sphere of influence.

But the war, which has killed thousands of people, turned cities into rubble, and sent millions fleeing, has had the opposite effect.

It convinced neutral Finland and Sweden to seek to join NATO and helped pave the way for Ukraine’s EU membership bid.

“Ukrainians are ready to die for the European perspective,” European Commission President Ursula von der Leyen said on Friday while announcing its decision to recommend Ukraine and its neighbor Moldova as candidates for EU membership.

“We want them to live with us the European dream,” she said, wearing a yellow blazer over a blue blouse, Ukrainian colors. – Rappler.com