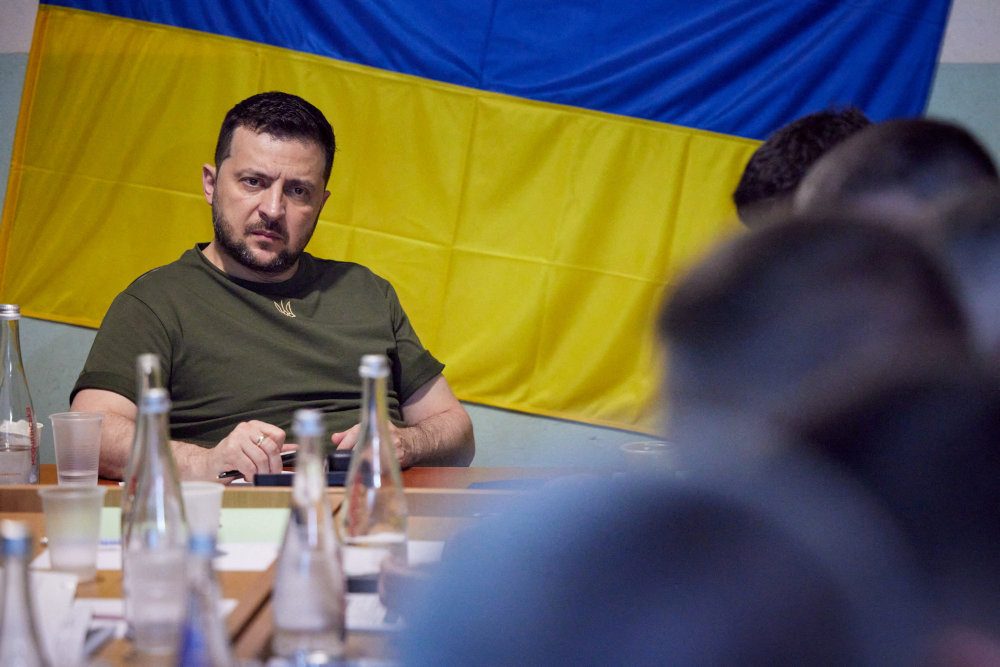 VOLODYMYR ZELENSKIY. Ukraine's President Volodymyr Zelenskiy attends a meeting with local authorities during a visit to the southern city of Mykolaiv, as Russia's attack on Ukraine continues, in Ukraine June 18, 2022.

KYIV, Ukraine – Russian forces captured territory along a frontline river in eastern Ukraine on Monday, June 20, and President Volodymyr Zelenskiy predicted Moscow would escalate attacks ahead of a summit of European leaders expected to welcome Kyiv’s bid to join the EU.

Moscow’s separatist proxies claimed to have captured Toshkivka, a town on the mostly Ukrainian-held western bank of the Siverskyi Donets river, south of Sievierodonetsk, which has become the main battlefield city in recent weeks.

Ukraine acknowledged that Moscow had success in Toshkivka and said the Russians were trying to gain a foothold there to make a breakthrough into the wider, Ukrainian-held pocket of the eastern Donbas region. It also confirmed a Russian claim to have captured Metyolkine on Sievierodonetsk’s eastern outskirts.

“Obviously, this week we should expect from Russia an intensification of its hostile activities,” Zelenskiy said in a Sunday, June 19, nightly video address. “We are preparing. We are ready.”

Moscow, for its part, denounced a decision by EU member Lithuania to ban transport of some basic goods to Kaliningrad, a Russian outpost on the Baltic Sea surrounded by EU territory.

The Lithuanian ban, which took effect on Saturday, June 18, blocks shipments of coal, metals, construction materials and advanced technology to the outpost. Kremlin spokesperson Dmitry Peskov called the move illegal and unprecedented, and said Moscow would announce a response soon.

EU leaders at a summit later this week are expected to give their blessing to Ukraine becoming an official candidate to join, a decision that will be marked as a triumph in Kyiv.

Though it would take years for Ukraine to enter the EU, for the bloc to reach deep into the heart of the former Soviet Union would bring about one of Europe’s biggest economic and social transformations since the Cold War. Ukraine applied to join just four days after Russian President Vladimir Putin ordered his troops across the border in February.

Putin says the “special military operation” is aimed at disarming a neighbor Russia views as a threat and protecting Russian speakers there. Kyiv believes Moscow’s true aim is to restore control over Ukraine and erase its national identity.

In the strongest step yet proposed by Kyiv to enforce a cultural break with Moscow, Ukraine’s parliament passed bills on Sunday that would ban the publication of books or the public broadcast of music by citizens of post-Soviet Russia.

The measures, which require Zelenskiy’s signature to become law, “are designed to help Ukrainian authors share quality content with the widest possible audience, which after the Russian invasion do not accept any Russian creative product on a physical level,” said Culture Minister Oleksandr Tkachenko. (LIVE UPDATES: Russia-Ukraine crisis)

Russian forces were defeated in an assault on the capital Kyiv in March, but have since launched a new assault to capture more territory in the east and solidify their hold on the south.

The war has entered a brutal attritional phase in recent weeks, with Russian forces concentrating their overwhelming artillery firepower on a Ukrainian-held pocket of the Donbas, which Moscow claims on behalf of separatists.

Much of the fighting has taken place along the Siverskyi Donets river. Russia’s TASS news agency quoted Vitaly Kiselev, an aide to the interior minister of the self-proclaimed Russian-backed Luhansk People’s Republic separatist administration, as saying on Monday the town of Toshkivka had been “liberated.”

The town is located on the river’s western bank, south of Sievierodonetsk’s twin city Lysychansk, a key Ukrainian bastion.

Luhansk regional governor Serhiy Gaidai, acknowledged that a Russian attack on Toshkivka “had a degree of success.” Russian forces were trying to break through and gain a foothold there and near the small village of Ustinovka further north along the river, he said. The Russians were bringing a huge amount of heavy equipment there including tanks.

He also confirmed Russia’s claim to have captured Metyolkine on Sievierodonetsk’s eastern outskirts. “Unfortunately, we do not control Metyolkine today,” he said.

Sievierodonetsk Mayor Oleksander Stryuk said Russian forces controlled about two-thirds of the city, including most residential areas, and Moscow kept throwing forces at the Ukrainians in an attempt to take over completely.

“I hope that the city will hold and, once it has the advantage in firepower, we will be able to liberate it without leaving it first,” he said.

International concern has focused on trying to restore Ukrainian exports of food, now shut by a de facto Russian blockade. Ukraine is one of the world’s leading sources of grain and food oils, leading to fears of global shortages and hunger.

“We call on Russia to deblockade the ports,” EU foreign policy chief Josep Borrell told reporters. “It is inconceivable, one cannot imagine that millions 4of tonnes of wheat remain blocked in Ukraine while in the rest of the world people are suffering hunger.”

“This is a real war crime, so I cannot imagine that this will last much longer,” he said on arriving to a meeting of EU foreign ministers in Luxembourg.

Russia blames the food crisis on Western sanctions curbing its own exports.

The war has also disrupted global energy markets, including Russian shipments of oil and gas to Europe, still the continent’s main source of energy and Moscow’s primary source of income. Moscow blames EU sanctions for a decline in gas export pipelines, saying the sanctions had prevented it from restoring pumping equipment sent for repairs. – Rappler.com