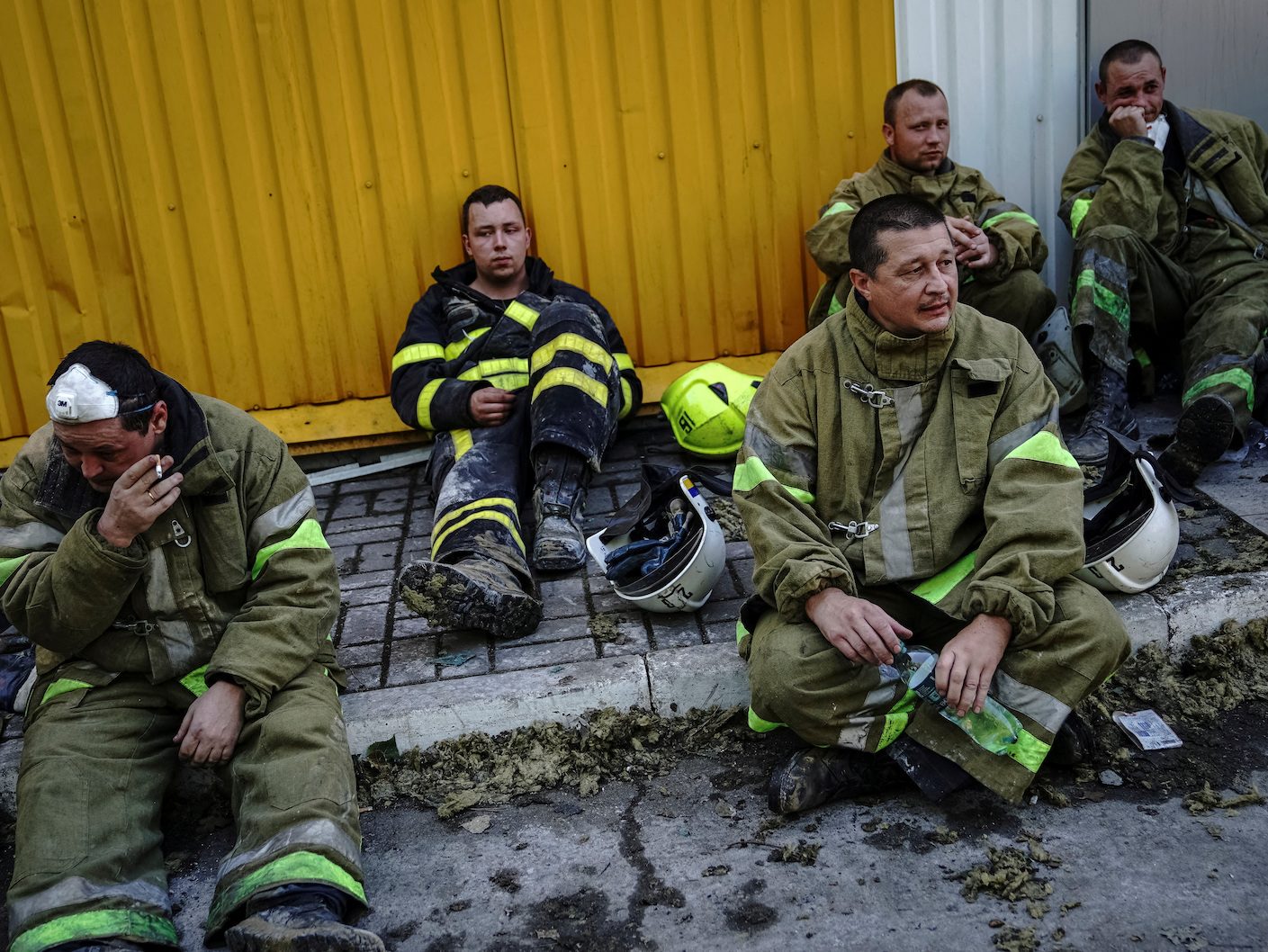 Rescuers rest at a site of a shopping mall hit by a Russian missile strike, as Russia's attack on Ukraine continues, in Kremenchuk, in Poltava region, Ukraine June 28, 2022.

Facebook Twitter Copy URL
Copied
The attack, in the central city of Kremenchuk far from any frontline, drew a wave of global condemnation, with France's Emmanuel Macron among leaders who called it a 'war crime'

KREMENCHUK, Ukraine – Exhausted firefighters searched on Tuesday, June 28, for survivors in the rubble of a Ukrainian shopping mall, where authorities said 36 people were still missing after a Russian missile strike that killed at least 18.

The attack, in the central city of Kremenchuk far from any frontline, drew a wave of global condemnation, with France’s Emmanuel Macron among leaders who called it a “war crime”.

Ukraine said Moscow had killed civilians deliberately. Russia said it had struck an arms depot and falsely claimed the mall was empty.

At a summit in Germany, leaders of the G7 industrialized democracies announced plans for a price cap on Russian oil, a new strategy designed to starve Russia of the resources for war without worsening a global economic crisis.

Next up will be a NATO summit Spain, at which the Western military alliance is expected to announce hundreds of thousands of troops shifting to a higher state of alert, and overhaul its strategic framework to describe Moscow as an adversary.

Relatives of the missing in Kremenchuk were lined up on Tuesday at a hotel across the street from the wreckage of the shopping center, where rescue workers had set up a base.

Weary firefighters sat on a kerb after a night battling the blaze and searching for survivors, mostly in vain.

Oleksandr, wetting his face from a water bottle on a bench, said his team had worked all night picking through the rubble.

“We pulled out five bodies. We didn’t find anybody alive,” he said.

Ukrainian President Volodymyr Zelenskiy accused Russia of deliberately targeting civilians in “one of the most defiant terrorist attacks in European history”.

Russia’s defense ministry said its missiles had struck an arms depot storing Western weapons, which exploded, causing the blaze that spread to the nearby mall. Kyiv said there was no military target in the area, including at a nearby factory that was also hit.

Russia described the shopping center as disused and empty. But that was contradicted by the relatives of the dead and missing, and the dozens of wounded survivors such as Ludmyla Mykhailets, 43, who had been shopping there with her husband when the blast threw her into the air.

“I flew head first and splinters hit my body. The whole place was collapsing,” she said at a hospital where she was being treated.

“It was hell,” said her husband, Mykola, 45, blood seeping through a bandage around his head.

Leaders of the Group of Seven (G7) countries, at a summit in Germany, said the attack was “abominable”. Russian President Vladimir Putin and those responsible will be held to account, they said in a statement.

“It’s a question about crimes against humanity,” Ukraine’s Prosecutor General Iryna Venediktova told Reuters. “I think it’s like systematical shelling of civilian infrastructure – with what aim? To scare people, to kill people to make terror in our cities and villages.”

Western countries have imposed economic sanctions on Russia, but so far have failed to curtail Moscow’s main source of income: oil and gas export revenue, which has actually increased as the threat of supply disruption has propelled global prices.

At the end of the summit in Germany, the G7 countries announced a new approach – leaving Russian oil on the market while imposing a cap on the price countries could pay for it.

“We invite all like-minded countries to consider joining us in our actions,” they said in a communique.

The policy would squeeze Putin’s “resources that he has to wage war, and secondly increase stability and the security of supply in global oil markets,” a senior US official said.

With summit action now shifting to the NATO meeting in Spain, White House National Security Adviser Jake Sullivan said a new strategic concept would “describe in stark terms the threat that Russia poses and the way in which it has shattered peace in Europe”.

That marks a departure from post-Soviet NATO policy which cast Moscow as a potential partner.

Dmitry Rogozin, a former Russian ambassador to NATO and now head of Russia’s space agency, responded by releasing satellite pictures and coordinates of the summit venue, the Pentagon, White House and other Western state buildings.

“Today, the NATO summit opens in Madrid, at which Western countries will declare Russia their worst enemy,” Rogozin wrote on social media. “Roscosmos publishes satellite photographs of the summit venue and the very ‘decision centers’ that support Ukrainian nationalists.”

Russia denies intentionally targeting civilians in its “special military operation” which has destroyed cities, killed thousands of people and driven millions from their homes.

The attack on Kremenchuk comes after days of increasing Russian missile strikes far from the frontline, including the first attacks on the capital Kyiv for weeks.

In Kharkiv, Ukraine’s second-largest city where Russian troops were pushed back in a counter-offensive in May, authorities said five people were killed by shelling that hit targets including apartment buildings and a school.

The UN Security Council, where Moscow wields a veto, will meet on Tuesday at Ukraine’s request following the Kremenchuk attack. UN spokesperson Stephane Dujarric said the missile strike was deplorable.

On the battlefields of the Donbas region, Ukraine endured another tough day following last week’s loss of the now-ruined city of Sievierodonetsk.

Russian forces are trying to storm Lysychansk, across the Siverskyi Donets River from Sievierodonetsk, to complete their capture of Luhansk, one of two eastern provinces Moscow aims to conquer on behalf of separatist proxies.

Ukrainian forces still controlled the city but its loss was possible as Russia poured resources into the fight, he added.

“They really want this and a lot of reserves are being thrown just for this,” he told Reuters. “We do not need to lose an army for the sake of one city.”

The Luhansk separatists said Russian and separatist troops were advancing westward into Lysychansk and street battles had erupted around the city stadium.

Further west at Bakhmut, volunteers helping evacuate elderly residents from the path of Russia’s advance wrapped Tamara Kanonchenko, 81, in a cloth stretcher and carried her downstairs from her flat to a van to join others leaving by train.

“Almost half of the people living in the city have left. She has disabilities…she can’t do much herself. So if there were a difficult situation, I would not be able to come and see her,” said social worker Iryna Navrotska.

The advances in Luhansk have given Moscow its biggest victories in weeks, playing to Russia’s strength in overwhelming artillery firepower that can demolish cities in its path.

Ukraine still hopes to turn the tide with a counterattack once Moscow exhausts its invading forces. – Rappler.com