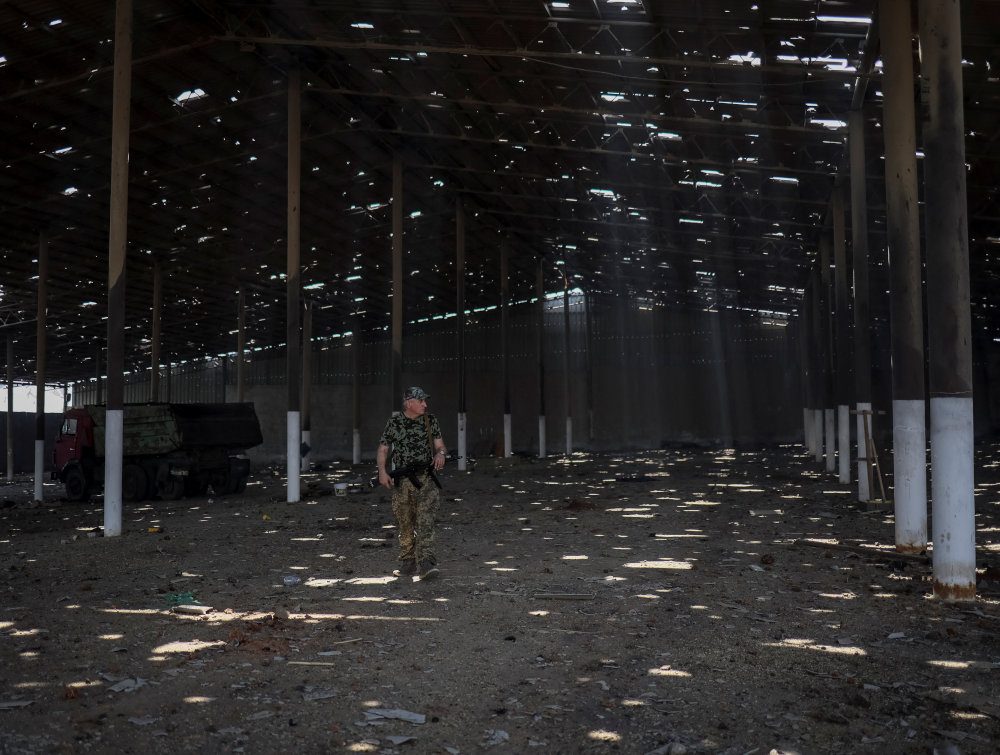 DESTROYED GRAIN SILO. A Ukrainian serviceman walks in a destroyed grain silos after a morning shelling, amid Russia's invasion of Ukraine, near the town of Soledar, Donetsk region Ukraine June 8, 2022.

Facebook Twitter Copy URL
Copied
After failing to take control of the capital Kyiv, the Kremlin says it is now seeking to completely 'liberate' Ukraine's breakaway Donbas where Russian-backed separatists broke away from Ukrainian government control in 2014

The battle for the Ukrainian city of Sievierodonetsk is brutal and will determine the fate of the Donbas region, said the country’s president, as Russian troops lay waste to the city in an assault aimed at controlling eastern Ukraine.

After failing to take control of the capital Kyiv, the Kremlin says it is now seeking to completely “liberate” Ukraine’s breakaway Donbas where Russian-backed separatists broke away from Ukrainian government control in 2014.

Around a third of the Donbas was held by the separatists before the February 24 invasion.

“This is a very brutal battle, very tough, perhaps one of the most difficult throughout this war,” Ukrainian President Volodymyr Zelenskiy said in a video statement on Wednesday, June 8.

“Sievierodonetsk remains the epicenter of the encounter in Donbas… Largely, that is where the fate of our Donbas is being decided now,” he added.

Ukrainian fighters in Sievierodonetsk pulled back to the city’s outskirts on Wednesday but have vowed to fight there for as long as possible.

Artillery shelling has turned the city in Ukraine’s Luhansk province to a bombed-out wasteland. Luhansk’s regional governor, Serhiy Gaidai, said the center of the town was being destroyed.

Ukrainian forces still control all of Sievierodonetsk’s smaller twin city Lysychansk on the west bank of the Siverskyi Donets River but Russian forces were destroying residential buildings there, Gaidai said.

Reuters could not independently verify the situation on the ground in either city.

Kyiv’s ambassador to the United States told CNN that Ukrainian troops were vastly outnumbered in Luhansk and Donetsk, which collectively form the Donbas, a largely Russian-speaking region.

But “as we already saw in the battle for Kyiv, we can lose something temporarily. Of course, we’re trying to minimize that because we know what (can) happen (when) Russians control territories, but we will get it back,” Oksana Markarova said.

West of Sievierodonetsk in Sloviansk, one of the main Donbas cities in Ukrainian hands, women with small children lined up to collect aid on Wednesday while other residents carried buckets of water across the city.

Most residents have fled but authorities say around 24,000 remain in the city, in the path of an expected assault by Russian forces regrouping to the north.

Albina Petrovna, 85, described the moment her building was caught in an attack, which left her windows shattered and her balcony destroyed.

“Broken glass fell on me but God saved me, I have scratches everywhere,” she said.

Ukraine’s military said four people were killed during Russian shelling on around 20 towns in the Donbas over the past 24 hours, and that its troops had killed 31 Russian soldiers. Reuters could not immediately verify the figures.

In Soledar, Donetsk, residents took shelter in basements as shells hit the town on Wednesday.

“We are shelled day and night. The shelling is ongoing. We stay in the basement almost all the time. The apartment is close, we run there during the day. During the night we stay here,” said a resident, who did not provide her name.

Another resident, 65-year-old Antonina, sobbed and asked, “When is it going to end?”

Soledar is only 18 km (11 miles) from the town of Bakhmut, which lies at the start of a crucial supply road to the cities of Lysychansk and Sievierodonetsk.

Moscow says it is engaged in a “special military operation” to disarm and “denazify” its neighbour. Ukraine and its allies say Moscow has launched an unprovoked war of aggression, killing thousands of civilians and flattening cities.

United Nations figures show more than 7 million people have crossed the border from Ukraine since Russia invaded on February 24.

Ukraine is one of the world’s biggest grain exporters, and Western countries accuse Russia of creating a risk of global famine by blockading Ukraine’s Black Sea and Azov Sea ports. Moscow says Western sanctions are responsible for food shortages.

Turkey has been trying to broker negotiations to open up Ukraine’s Black Sea ports. Foreign Minister Mevlut Cavusoglu hosted Russian Foreign Minister Sergei Lavrov on Wednesday and said a UN-backed deal on the ports was possible with further talks.

Lavrov said the Ukrainian ports could be opened, but Ukraine would have to de-mine them first. Ukraine dismissed Russia’s assurances as “empty words” and said Russian attacks on farmland and agricultural sites were exacerbating the crisis.

Vitaliy Kim, governor of the Mykolaiv region, where Russian shelling destroyed the warehouses of one of Ukraine’s largest agricultural commodities terminals over the weekend, told Reuters Moscow was trying to scare the world into meeting its terms.

The Kremlin cited Russian President Vladimir Putin as saying Western sanctions must be lifted for Russian grain to reach markets.

Zelenskiy told a Yale University summit of business leaders by video link on Wednesday that he believes Russia will not seek a diplomatic end to the war unless the world supports Ukrainian troops in their fight.

“We are an independent, righteous, normal country,” Zelenskiy said, adding about his troops’ war efforts: “We do it on our land and we slowly push them back. That’s how we’re going to keep on moving.” – Rappler.com