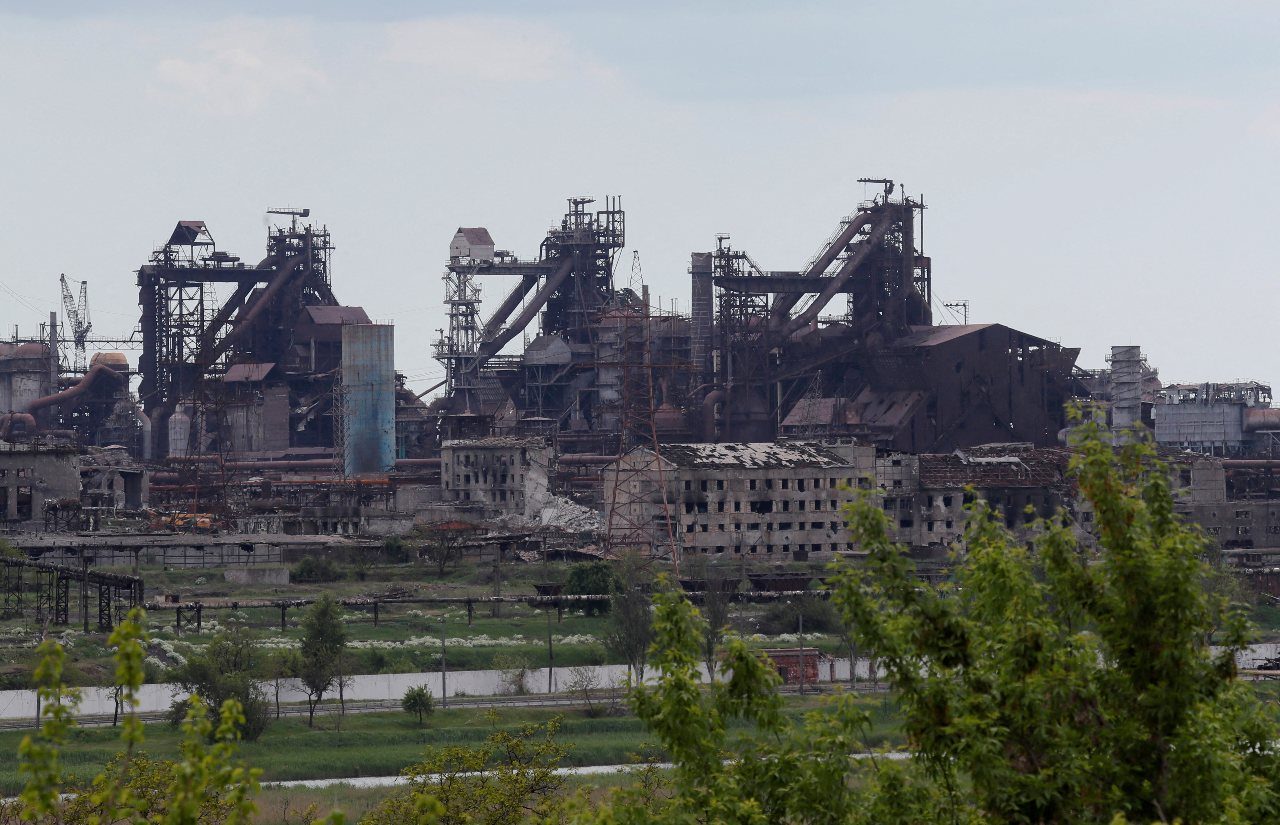 AZOVSTAL. A view shows a plant of Azovstal Iron and Steel Works during Ukraine-Russia conflict in the southern port city of Mariupol, Ukraine May 15, 2022.

Facebook Twitter Copy URL
Copied
(2ND UPDATE) US President Joe Biden hosts Swedish Prime Minister Magdalena Andersson and Finnish President Sauli Niinistö, a chance for Washington to demonstrate that Russia's invasion has backfired, bringing about the very expansion of NATO that Moscow has said it was fighting to halt

Turkish President Tayyip Erdogan dug in over his rejection of Sweden and Finland joining NATO, casting a shadow over a White House visit on Thursday, May 19, by the leaders of the Nordic nations who applied this week to join the US-led alliance.

Finland and Sweden say they have been spurred into joining NATO by Russia’s invasion of Ukraine, reversing generations of military non-alignment to bring about the biggest shakeup in European security for decades.

US President Joe Biden hosted Swedish Prime Minister Magdalena Andersson and Finnish President Sauli Niinistö, a chance for Washington to demonstrate that Russia’s invasion has backfired, bringing about the very expansion of NATO that Moscow has said it was fighting to halt.

“This is a historic event, a watershed moment in European security. Two nations with a long tradition of neutrality will be joining the world’s most powerful defensive alliance,” said White House national security adviser Jake Sullivan.

But Turkey has surprised its allies by objecting to the move, accusing the two Nordic states of harboring Kurdish militants.

“We will continue our policy in a determined way. We have told allies that we will say no to Finland and Sweden’s NATO membership,” Erdogan said in an interview with students late on Wednesday. “NATO is a security alliance and we cannot accept terrorists to be in it.”

Washington has so far played down the Turkish objections, saying it expects the issues to be resolved.

The past week has seen Russia secure its biggest victory since the invasion began in February, with Kyiv announcing it had ordered its garrison in a steelworks in Mariupol to stand down, after a nearly three month siege of the city.

The ultimate outcome of the bloodiest battle in Europe for decades has remained publicly unresolved, with no confirmation of the fate of hundreds of Ukrainian defenders. Moscow said on Thursday that 1,730 Ukrainian fighters had surrendered so far, including 771 in the past 24 hours.

Ukraine, which says it aims to secure a prisoner swap, has declined to say how many were inside the plant or comment on the fate of the rest since confirming that just over 250 had surrendered in the initial hours after it ordered them to yield.

The Switzerland-based International Committee of the Red Cross said it has registered hundreds of prisoners from the plant now held by Russia, but it has not given a precise number.

The leader of Russian-backed separatists in control of the area said nearly half of the fighters remained inside the
steelworks, where underground bunkers and tunnels had protected them from weeks of Russian bombardment.

The wounded had been given medical treatment while those who were fit had been taken to a penal colony and were being treated well, he said. Ukrainian officials say they cannot comment publicly on the fate of the fighters while negotiations are under way to rescue them.

Russia denies that it agreed to a prisoner swap. Many of the Azovstal defenders belong to a Ukrainian unit with far-right origins, the Azov Regiment, which Moscow calls Nazis and says must be prosecuted for crimes.

The success in Mariupol comes as Russian forces have been losing ground elsewhere: driven from northern Ukraine and the area around the capital at the end of March, and pushed this month from the outskirts of the second-largest city Kharkiv.

Oleksiy Gromov, Deputy Chief of the Main Operational Department of the General Staff of Ukraine’s Armed Forces, told an online briefing that Ukraine had recaptured 23 settlements near Kharkiv in the last two weeks.

On Thursday, the crash of artillery duels resounded across sun-lit fields and woodlands north of Kharkiv near the village Slatyne.

Ukrainian troops pressing on with their advance said fighting was under way around the nearby village of Demetiivka, which the Ukrainian military said was recaptured the previous day, only about 8 km from the Russian border.

Vitalyi, a military ambulance driver, had parked his vehicle, which he had christened “Angel”, under cover to avoid being spotted.

“Drones are always a big problem, during the day as well as at night,” he said. “Because after the drones come the shells.”

In a sign of the return of normal life in the capital, the United States reopened its embassy on Wednesday.

“The Ukrainian people… have defended their homeland in the face of Russia’s unconscionable invasion, and, as a result, the Stars and Stripes are flying over the Embassy once again,” said Secretary of State Antony Blinken.

But Russia is still pressing its main offensive using massed artillery and armor, trying to capture more territory in the eastern Donbas, comprised of the Donetsk and Luhansk regions, which Moscow claims on behalf of separatists.

Police said on Thursday that two children had been killed in the Donetsk city of Lyman. Serhiy Gaidai, governor of neighboring Luhansk region, said four people had been killed and three wounded in shelling of the frontline city of Sievierodonetsk.

In Russia, the regional governor of the Kursk border region accused Ukrainian forces of shelling a border village, killing at least one civilian. Both sides have accused each other of cross border shelling for weeks. Reuters was unable to verify the reports. – Rappler.com