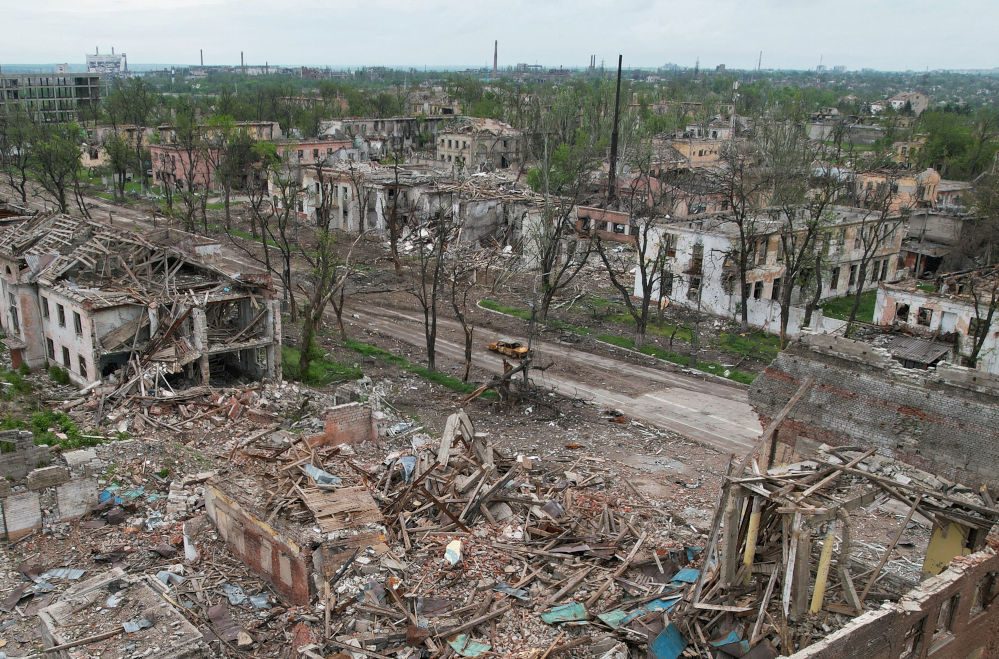 MARIUPOL IN RUINS. A view shows destroyed buildings located near Azovstal Iron and Steel Works, during Ukraine-Russia conflict in the southern port city of Mariupol, Ukraine May 22, 2022.

Facebook Twitter Copy URL
Copied
(2nd UPDATE) 'Today we completed work at Desna. In Desna, under the rubble, there were 87 casualties. Eighty-seven corpses,' President Volodymyr Zelenskiy says during a speech by video link to business leaders in Davos, Switzerland

Kyiv revealed its worst military losses from a single attack of the Ukraine war on Monday, May 23, saying 87 people had been killed last week when Russian forces struck a barracks housing troops at a training base in the north.

The disclosure that scores had been killed in the attack demonstrated Russia’s ability to inflict huge losses, even far from the front. Previously, Kyiv had said eight people died in the May 17 strike on the barracks in the town of Desna.

“Today we completed work at Desna. In Desna, under the rubble, there were 87 casualties. Eighty-seven corpses,” President Volodymyr Zelenskiy said during a speech by video link to business leaders in Davos, Switzerland.

Moscow had said at the time that it hit a training base with long-range missiles. The toll Zelenskiy announced on Monday was more than double the number killed in a similar attack on a Ukrainian training base in Yaraviv in the west in March.

“History is at a turning point… This is really the moment when it is decided whether brute force will rule the world,” Zelenskiy said in his address, calling for maximum economic sanctions on Russia.

In the latest fighting at the battlefront, Kyiv said it had held off a Russian assault on Sievierodonetsk, an eastern city that has become the main target of Moscow’s offensive since it seized Mariupol last week.

Russian forces tried to storm Sievierodonetsk but were unsuccessful and retreated, Zelenskiy’s office said. Moscow has been pushing to overrun the city as it tries to encircle Ukrainian forces and fully capture Luhansk and Donetsk provinces, the Donbas region it claims on behalf of separatists.

With Moscow having captured Mariupol last week after a three-month siege but losing territory elsewhere, the war in Ukraine is entering what some Western military analysts describe as a new phase: a major Russian push to capture the Donbas, before Moscow is expected to shift to defense.

In Kyiv, a court in the conflict’s first war crimes trial handed down a life prison sentence on a Russian tank commander who had pleaded guilty to killing shooting a 62-year-old Ukrainian civilian dead on the invasion’s fourth day.

The soldier, Vadim Shishimarin, 21, wearing a blue and grey hooded sweatshirt, watched silently from a reinforced glass box and showed no emotion as the verdict was read out. The Kremlin had complained that it could not help defend him in court.

In Mariupol, where hundreds of Ukrainian fighters finally laid down arms last week after a nearly three-month siege, Russian mine clearing teams were combing through the ruins of the giant Azovstal steel plant.

A huge armored bulldozer painted with a white letter “Z”, symbol of Russia’s assault, pushed debris to the side as a small group of soldiers picked their way through the wreckage with metal detectors.

“The task is huge. The enemy planted their own landmines, we had also planted anti-personnel mines while blocking the enemy. So we’ve got some two weeks of work ahead of us,” said a Russian soldier, going by the nom de guerre Babai. He said his crew had destroyed more than 100 explosives over two days so far.

Ukraine has been trying to secure a prisoner swap for fighters who surrendered last week. The leader of pro-Russian separatists in control of the area said the prisoners would be tried by a tribunal, but a Russian deputy foreign minister was quoted as saying Moscow could discuss a swap.

An aide to Mariupol’s Ukrainian mayor, operating outside the city, said remaining residents were in danger of disease as sewers overflow. Ukraine believes tens of thousands of people died in the siege of the city of more than 400,000 people.

‘Wiping off the face of the earth’

Russia has focused its “special military operation” on the east since its troops were driven out of the area around the capital Kyiv and the north at the end of March.

Since last month, Moscow has said its main effort is capturing all of the Donbas. Despite pouring its forces into the area and launching massive artillery bombardments, it has made only small territorial gains, meanwhile losing territory in a Ukrainian counter-attack further north around Kharkiv.

But the full capture of Mariupol last week gives Russia its biggest victory for months. Its forces now control a largely unbroken swathe of the east and south, freeing up more troops to join the main Donbas fight.

In recent days it has launched a series of assaults to capture Sievierodonetsk, the easternmost part of a Ukrainian-held pocket of the Donbas and one of the last parts of Luhansk province still outside Russia’s grip.

Luhansk governor Serhiy Gaidai said Russia was “wiping Sievierodonetsk from the face of the earth”, trying to advance from three directions: to overrun Sievierodonetsk, cut off a highway south of it and cross the river further west.

Some Western military experts say Russia may soon be running out of combat power for offensive operations and could have to shift to defending territory, while more Western weapons would strengthen Kyiv for a future counterattack.

“As their eastern offensive loses momentum, the Russians will inevitably have to transition to a defensive strategy in Ukraine. And in doing so, the Russian Army will confront a new range of difficult challenges ahead,” tweeted Mick Ryan, a retired Australian major general.

Britain’s ministry of defense said Moscow had probably endured losses in three months in Ukraine on par with its losses over nine years in Afghanistan in the 1980s.

“A combination of poor low-level tactics, limited air cover, a lack of flexibility, and a command approach which is prepared to reinforce failure and repeat mistakes has led to this high casualty rate, which continues to rise in the Donbas offensive,” it said. – Rappler.com