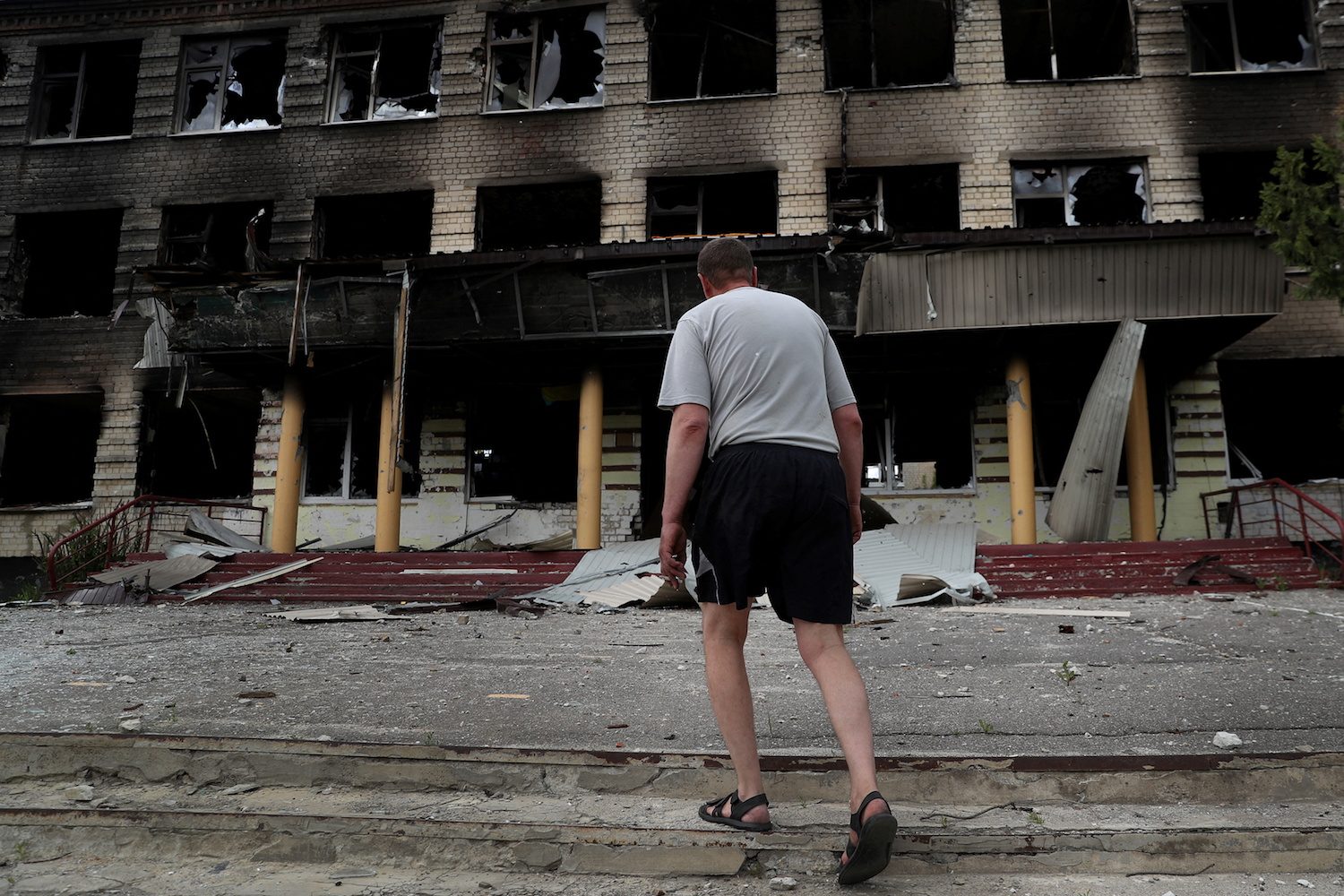 DESTRUCTION. A resident walks in front of the destroyed Vilkhivka school, as Russia's attack on Ukraine continues, in Vilkhivka, Ukraine May 25, 2022.

Facebook Twitter Copy URL
Copied
(1st UPDATE) 'The catastrophic unfolding events could be still stopped if the world treated the situation in Ukraine as if it were facing the same situation, if the powers that be did not play around with Russia but really pressed to end the war'

KYIV, Ukraine – President Volodymyr Zelenskiy urged the West to stop playing around with Russia and impose tougher sanctions on it to end its “senseless war” in Ukraine, adding that his country would remain independent, the only question was at what price.

Zelenskiy’s criticism of the West has mounted in recent days as the European Union moves slowly towards a possible Russian oil embargo and as thousands of Russian troops try to encircle the two eastern cities of Sievierodonetsk and Lysychansk.

Three months into its invasion of Ukraine, Russia has abandoned its assault on the capital Kyiv and is trying to consolidate control of the industrial eastern Donbas region, where it has backed a separatist revolt since 2014.

Western military analysts see the battle for Sievierodonetsk and Lysychansk as a possible turning point in the war after a shift in momentum towards Russia following the surrender of Ukraine’s garrison in Mariupol last week.

“Ukraine will always be an independent state and it won’t be broken. The only question is what price our people will have to pay for their freedom, and what price Russia will pay for this senseless war against us,” Zelenskiy said in a late-night address on Thursday, May 26.

“The catastrophic unfolding events could be still stopped if the world treated the situation in Ukraine as if it were facing the same situation, if the powers that be did not play around with Russia but really pressed to end the war.”

Zelenskiy complained about disagreements within the EU on more sanctions against Russia and asked why some countries were being allowed to block the plan.

The EU is discussing a sixth round of punitive measures, including an embargo on Russian oil imports. It requires unanimity but Hungary opposes the idea on the grounds that its economy would suffer too much.

Hungary needs 3-1/2 to 4 years to shift away from Russian crude and make huge investments to adjust its economy and until there is a deal on all issues, it cannot back the EU’s proposed oil embargo, a top Hungarian aide said.

Zelenskiy said Russia was getting one billion euros a day from the 27-nation bloc for energy supplies.

“How many more weeks will the European Union try to agree on a sixth package?” he asked.

“Pressure on Russia is literally a matter of saving lives. Every day of procrastination, weakness, various disputes or proposals to ‘pacify’ the aggressor at the expense of the victim merely means more Ukrainians being killed.”

Zelenskiy’s comments mark the second day in a row that he has sharpened his criticism of the world’s approach to the war.

On Wednesday, May 25, he savaged suggestions that Kyiv make concessions to bring peace, saying the idea smacked of attempts to appease Nazi Germany in 1938.

An EU summit on May 30-31 could see divisions between members who want a hard line on Russia and those calling for a ceasefire.

Russian forces attacked from three sides to try to encircle Ukrainian forces in Sievierodonetsk and Lysychansk on Thursday, Ukraine’s military said. If the two cities straddling the Siverskiy Donets river fall, nearly all of the Donbas province of Luhansk would be under Russian control.

Russia’s Donbas advance has been backed by massive artillery bombardment. Ukraine’s military said 50 towns in the Donetsk and Luhansk provinces were shelled on Thursday.

On Thursday, he said some 150 people were buried in a mass grave in one Lysychansk district as it was too dangerous for families to collect the bodies and bury them individually. Russia says it does not target civilians.

The head of Ukraine’s armed forces, Valeriy Zaluzhny, called on Telegram for more Western arms, particularly “weapons that will allow us to hit the enemy at a big distance.”

Russian Foreign Minister Sergei Lavrov later warned that any supplies of weapons that could reach Russian territory would be a “a serious step towards unacceptable escalation.”

Western countries led by the United States have provided Ukraine with long-range weaponry, including M777 howitzers and Harpoon anti-ship missiles, from Denmark.

Washington is even considering providing Kyiv with a rocket system with a range of hundreds of kilometers, and has held discussions with Kyiv about the danger of escalation if it strikes deep inside Russia, US and diplomatic officials told Reuters.

“We have concerns about escalation and yet still do not want to put geographic limits or tie their hands too much with the stuff we’re giving them,” said one US official, speaking on condition of anonymity.

Kremlin spokesperson Dmitry Peskov said Russia expected Ukraine to accept its demands in any peace talks. It wants Ukraine to recognize Russian sovereignty over the Crimea peninsula Moscow seized in 2014, and the independence of separatist-claimed territory. – Rappler.com