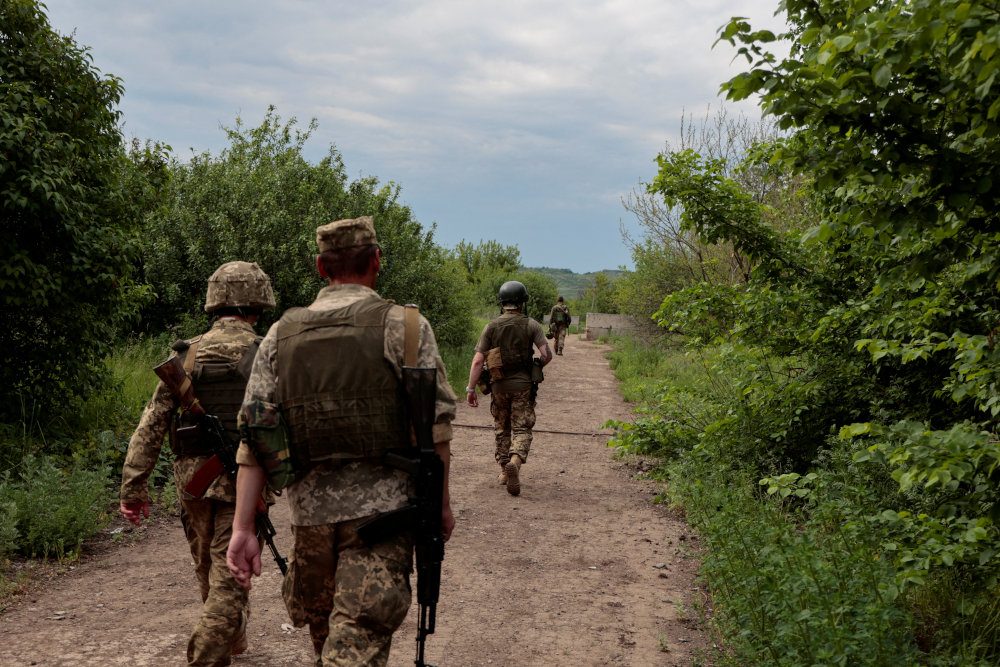 ON PATROL. Ukrainian servicemen patrol an area near a frontline, as Russia's attack on Ukraine continues, in Donetsk Region, Ukraine on May 29, 2022.

KYIV, Ukraine – Russian troops have entered the outskirts of the Ukrainian city of Sievierodonetsk, according to the regional governor, who described fierce fighting on Monday, May 30, over the ruins of a city that has become the focus of Moscow’s offensive.

The European Union has sought to make Moscow pay a heavy price for invading Ukraine, but leaders arriving for a summit acknowledged they were unlikely to pass a new round of sanctions yet, having failed to agree to ban imports of Russian oil.

Russia has concentrated its firepower on the last major population center still held by Ukrainian forces in the eastern Luhansk province, in a push to achieve one of President Vladimir Putin’s stated objectives after three months of war.

Incessant shelling has left Ukrainian forces defending ruins in Sievierodonetsk, but their refusal to withdraw has slowed the wider Russian offensive across the Donbas region. Luhansk region governor Serhiy Gaidai said Russian troops had advanced into the city’s southeastern and northeastern fringes.

The Russians “use the same tactics over and over again. They shell for several hours – for three, four, five hours – in a row and then attack”, Gaidai said.

“Those who attack die. Then shelling and attack follow again, and so on until they break through somewhere.”

With temperatures rising, he said there was a “terrible smell of death” on the outskirts of the city.

But he said Ukrainian forces had driven the Russians out of the village of Toshkivka to the south, potentially frustrating Moscow’s push to encircle the area.

Gaidai later said a French journalist had been killed by shrapnel that pierced his vehicle, and that evacuations from the area had been halted.

In a televised speech, Ukrainian President Volodymyr Zelenskiy described capturing Sievierodonetsk as “a fundamental task for the occupiers”.

“Some 90% of buildings are damaged. More than two-thirds of the city’s housing stock has been completely destroyed,” he said.

The EU’s latest sanctions package has been blocked by landlocked Hungary’s refusal to agree to a ban on imports of Russian oil, which it receives through the huge Soviet-era “Friendship” pipeline.

According to a draft text reviewed by Reuters – which could still be changed – the leaders would agree in principle to ban Russian oil, first by sea and at some point later through pipelines, but with dates and details left out.

European Commission President Ursula von der Leyen acknowledged that agreement had not been reached, but added: “I’m confident that thereafter there will be a possibility.”

Estonian Prime Minister Kaja Kallas said a deal at the next summit, set for June 23-24, was “the realistic approach by now”.

The failure has infuriated Kyiv and caused frustration among its biggest supporters within the EU.

“It’s only money: the Ukrainians are paying with their lives,” said Latvian Prime Minister Krisjanis Karins. “We can and we must support them, if only out of self-interest, because only when Russia is defeated can we in Europe feel safe.”

Ahead of the summit, German Economy Minister Robert Habeck expressed fears that EU unity was “starting to crumble”.

After failing to capture Kyiv in March, Russia announced that the focus of its “special military operation” was now to seize the entire Donbas region, consisting of two provinces, Luhansk and Donetsk, that Moscow claims on behalf of separatist proxies.

Russian Foreign Minister Sergei Lavrov on Sunday said the “liberation” of the Donbas was an “unconditional priority”.

Capturing Sievierodonetsk and its twin city Lysychansk on the opposite bank of the Siverskyi Donets river would give Russia effective control of Luhansk province, a point at which the Kremlin might be able to declare some form of victory.

But by focusing its effort on a battle for the single small city – Sievierodonetsk housed only around 100,000 people before the war – Russia might be leaving other territory open to eventual Ukrainian counterstrikes.

The past few days have seen initial signs of a potential Ukrainian counteroffensive in the south, where Moscow is trying to consolidate its control of Kherson province.

Kyiv says its forces pushed back Russian troops in recent days to defensive positions in three villages – Andriyivka, Lozove and Bilohorka – all located on the south bank of the Inhulets River that forms the border of Kherson.

The Institute for the Study of War think tank said this counterattack so far did not appear likely to retake substantial territory in the near term, but could disrupt Russian operations and force Moscow to reinforce the area.

French Foreign Minister Catherine Colonna became the latest Western dignitary to go to Kyiv, visiting a mass grave in the suburb of Bucha, where hundreds of dead civilians were found after Russian forces withdrew following their failed assault on the capital in March. Moscow denies targeting civilians.

Ukrainian prosecutors said they would try a Russian soldier in absentia for killing a civilian man and raping his wife in Brovary, another Kyiv suburb, in March, the first prosecution of sexual violence by Russian troops.

Kyiv has called on the West to provide longer-range weapons to turn the tide in the war. Zelenskiy said he expected “good news” in the coming days. US President Joe Biden said Washington would not give Ukraine missiles that could be used to attack Russia. – Rappler.com