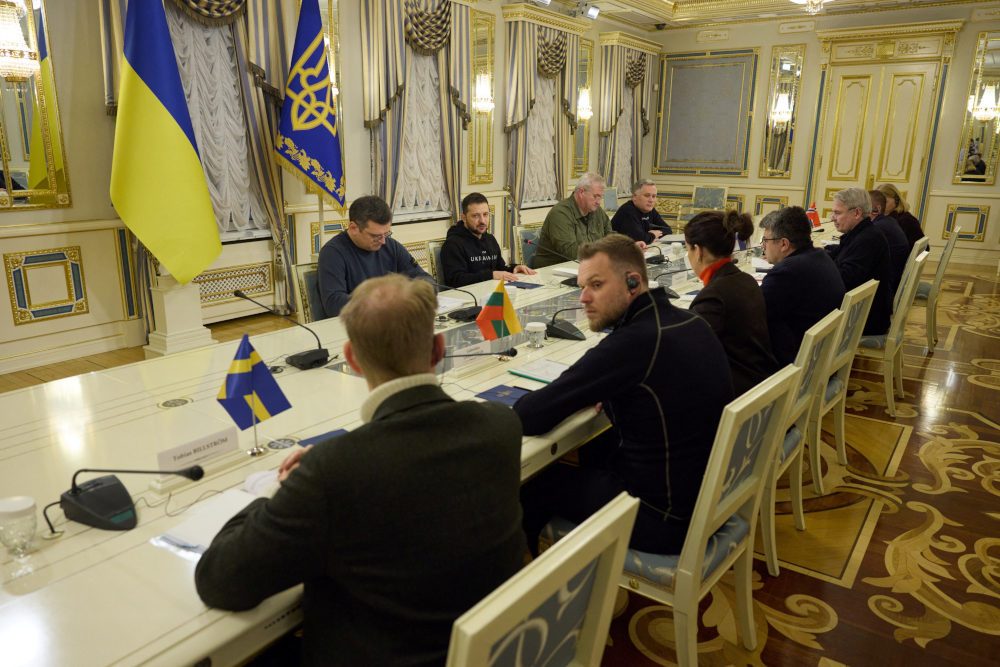 Facebook Twitter Copy URL
Copied
(3RD UPDATE) Ukrainians flee the streets for bomb shelters, although there are no immediate reports of major attacks away from the front

KYIV, Ukraine – The United States and NATO allies on Tuesday, November 29, promised more arms for Kyiv and equipment to help restore Ukrainian power and heat knocked out by Russian missile and drone strikes, as air raid sirens blared across Ukraine for the first time this week.

Ukrainians fled the streets for bomb shelters, although the all-clear later sounded across the country apart from the front-line eastern province of Luhansk.

US Secretary of State Antony Blinken and other foreign ministers from the NATO alliance began a two-day meeting in Bucharest, seeking ways both to keep Ukrainians safe and warm and to sustain Kyiv’s military through a coming winter campaign.

“NATO will continue to stand for Ukraine as long as it takes. We will not back down,” alliance General-Secretary Jens Stoltenberg said in a speech in Bucharest.

He told reporters Russian President Vladimir Putin was “trying to use winter as a weapon of war” as Moscow’s forces lose on the battlefield, and that Western allies would step in to help. British Foreign Secretary James Cleverly accused Putin of trying to “freeze the Ukrainians into submission”.

US and European officials said the ministers would focus on military aid such as air defense systems and ammunition, as well as non-lethal aid including fuel, medical supplies, winter equipment and drone jammers, delivered through NATO.

“I hope we will agree on a quite significant package of non-lethal help,” Czech Foreign Minister Jan Lipavsky said.

Russia has been carrying out huge attacks on Ukraine’s electricity transmission and heating infrastructure roughly weekly since October, in what Kyiv and its allies say is a deliberate campaign to harm civilians, a war crime.

Moscow says hurting civilians is not its aim but that their suffering will end only if Kyiv accepts its demands, which it did not spell out. Although Kyiv says it shoots down most of the incoming missiles, the damage has been accumulating and the impact growing more severe with each strike.

The worst attack so far was on November 23, leaving milions of Ukrainians in cold and darkness. President Volodymyr Zelenskiy told Ukrainians at the start of this week to expect another soon that would be at least as damaging.

There are no political talks to end the war. Moscow has annexed Ukrainian territory which it says it will never relinquish; Ukraine says it will fight until it recovers all occupied land.

Kyiv said it wants weapons to help it end the war – by winning it.

“It’s not only about air defense or a tank, but also an important support act for people preparing to survive their harshest winter and paying the highest price for Europe’s security,” he wrote.

Russia called off nuclear talks with the United States this week at the last minute. Moscow said it had “no choice” but to cancel the talks, aimed at resuming inspections under an arms control treaty, because Washington refused to address its wider concerns about strategic stability.

Russian news agencies quoted Deputy Foreign Minister Sergei Ryabkov as warning Washington of unspecified risks because of its support for Kyiv against what Russia calls a “special military operation” to disarm its neighbor.

“We are sending signals to the Americans that their line of escalation and ever deeper involvement in this conflict is fraught with dire consequences. The risks are growing,” Ryabkov was quoted as saying.

In Kyiv, snow fell and temperatures were hovering around freezing as millions in and around the capital struggled to heat their homes. After a week of trying to restore electricity from the last attacks, national grid operator Ukrenergo said the system was still producing a shortfall of 30% of needed power.

Along front lines in eastern Ukraine, the onset of winter is ushering in a new phase of the conflict with intense trench warfare along heavily fortified positions, posing new challenges for both sides after several months of Russian retreats.

With Russian forces having pulled back in the northeast and withdrawn across the Dnipro River in the south, the front line on land is only around half the length it was a few months ago. That will make it harder for Ukrainian forces to find weakly defended stretches to attempt new breakthroughs.

Both sides will have to keep troops supplied and healthy in cold, wet trenches for the first long winter of the war, a bigger challenge for the Russians as an invading force with longer and more vulnerable supply lines.

Ukraine’s armed forces General Staff said late on Monday that Russian forces were heavily shelling towns on the west bank of the Dnipro River, including Kherson.

Russia kept up heavy shelling of key targets Bakhmut and Avdiivka in Donetsk province, and to the north bombarded areas around the towns of Kupiansk and Lyman, both recaptured recently by Kyiv, the Ukrainian military said.

Ukrainian forces had damaged a rail bridge north of the Russian-occupied southern city of Melitopol that has been key to supplying Russian forces dug in there, it added. Reuters could not independently verify the reports. – Rappler.com