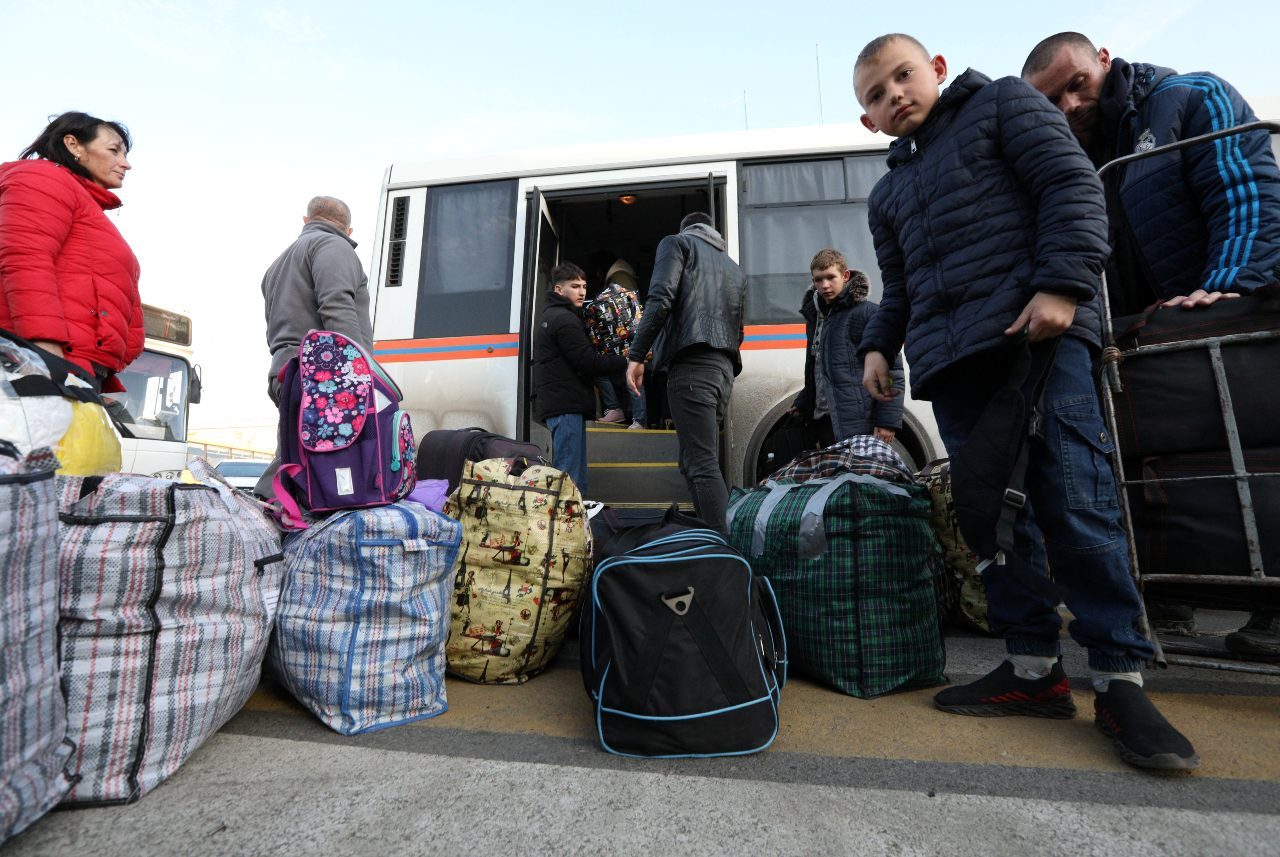 EVACUATION. Civilians evacuated from the Russian-controlled Kherson region of Ukraine get off a bus as they arrive at a local railway station, after Russian-installed officials extended an evacuation order to the area along the eastern bank of the Dnipro River, in the town of Dzhankoi, Crimea, on November 2, 2022.

KYIV, Ukraine – Russian President Vladimir Putin publicly endorsed the evacuation of civilians from parts of Ukraine’s southern Kherson region on Friday, November 4, the latest sign of Russia’s retreat in one of the most hotly contested areas in Ukraine.

“Now, of course, those who live in Kherson should be removed from the zone of the most dangerous actions, because the civilian population should not suffer,” Putin told pro-Kremlin activists as he marked Russia’s Day of National Unity.

Moscow has already been ferrying people out of an area it controls in Kherson on the west bank of the Dinpro River, and this week announced that the evacuation zone would also include a 15 km buffer area on the east bank. But the comments appear to be the first time Putin has endorsed the evacuations personally. (LIVE UPDATES: Russia-Ukraine crisis)

Russia says it has been taking residents to safety from the path of a Ukrainian advance. Kyiv says the measures have included forced deportations of civilians out of Russian-occupied territory, a war crime, which Russia denies.

Kherson is one of four Ukrainian provinces Putin claimed to have annexed at the end of September. Ukrainian forces have been advancing in recent weeks in the only Russian-held pocket on the west bank of the Dnipro, a strategically vital foothold which Moscow had reinforced with thousands of troops.

On Thursday, November 3, Vladimir Stremousov, deputy head of the Russian-installed occupation administration in Kherson, said Russia was likely to withdraw its troops from the west bank of the river. In later remarks, Stremousov was more equivocal, saying he hoped there would be no retreat but “we have to take some very difficult decisions.”

Kyiv has been wary, saying the signs of a Russian pullout could be deception to lure its troops into a trap. A day after Stremousov’s remarks, there was silence from higher-ups in Moscow about the prospect of a military retreat.

Speculation has swirled over whether Russia was pulling out, since photos circulated on the internet on Thursday showing the main administrative building in Kherson city with Russia’s flag no longer flying atop it.

The regional capital, which is located on the west bank at the mouth of the Dnipro, is the only big city Russia has captured intact since its invasion in February. Its loss for Russian forces would be one of the severest blows of the war.

The surrounding province controls land access to Russian-occupied Crimea, and securing it was one of the few successes of an otherwise disastrous Russian campaign.

US Defense Secretary Lloyd Austin said he “certainly” believed Ukrainian forces could retake the Russian-held area on the west bank, in perhaps his most optimistic comments on the counter-offensive to date.

“Most importantly, the Ukrainians believe they have the capability to do that. We have seen them engage in a very methodical but effective effort to take back their sovereign territory.”

A Western official, speaking on condition of anonymity, said some Russian military commanders had already moved across the river to the east, effectively abandoning the troops under their command on the opposite bank.

“We would assess that in Kherson, it’s likely that most echelons of command have withdrawn now across the river to the east, leaving pretty demoralized and often in some cases leaderless troops to face off Ukrainians on the other side,” the official said. – Rappler.com