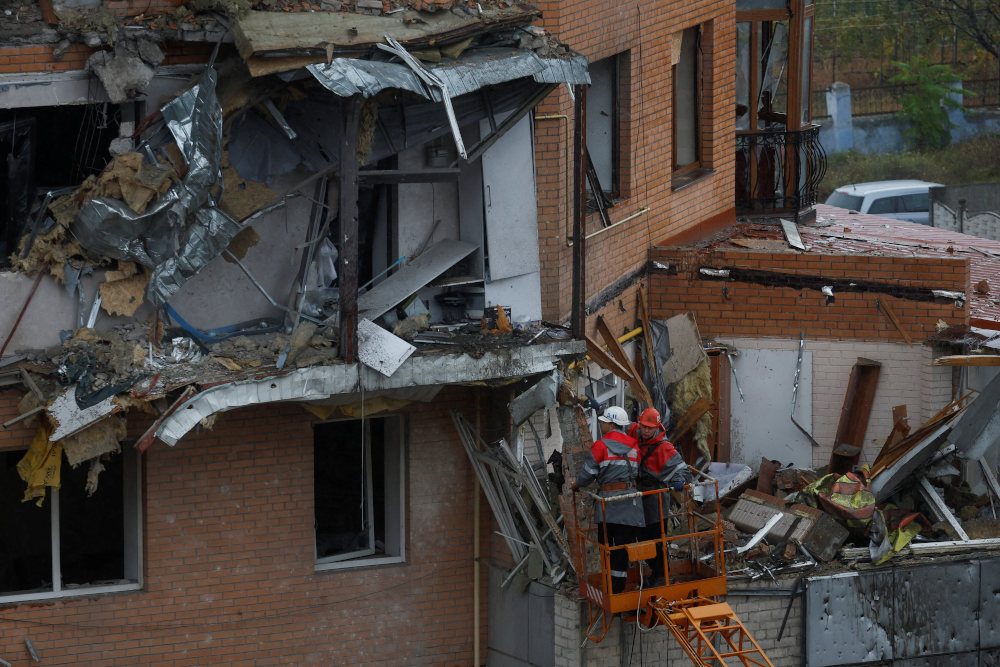 MYKOLAIV MISSILE STRIKE. Rescuers work at a site of a residential building heavily damaged by a Russian missile attack in Mykolaiv, Ukraine October 23, 2022.

Facebook Twitter Copy URL
Copied
(2nd UPDATE) 'If Russia calls and says that Ukraine is allegedly preparing something, it means one thing: Russia has already prepared all this,' says Ukrainian President Volodymyr Zelenskiy

KYIV, Ukraine – Western countries accused Russia on Monday, October 24, of plotting to use a threat of a bomb laced with nuclear material as a pretext for escalation in Ukraine, as Moscow evacuated civilians from a southern city in anticipation of a major battle.

In a joint statement, the foreign ministers of France, Britain and the United States said they had all rejected the allegations and reaffirmed their support for Ukraine against Russia.

“Our countries made clear that we all reject Russia’s transparently false allegations that Ukraine is preparing to use a dirty bomb on its own territory,” they said. “The world would see through any attempt to use this allegation as a pretext for escalation.”

In an overnight address, Ukrainian President Volodymyr Zelenskiy said the Russian accusation was a sign Moscow was planning such an attack itself and would blame Ukraine.

“If Russia calls and says that Ukraine is allegedly preparing something, it means one thing: Russia has already prepared all this,” Zelenskiy said.

“So when today the Russian Minister of Defence organises a phone carousel and calls foreign ministers with stories about the so-called ‘dirty’ nuclear bomb, everyone understands everything well. Understands who is the source of everything dirty that can be imagined in this war.”

Asked about the fact that others did not seem to believe Russian’s accusations, Kremlin spokesman Dmitry Peskov told a briefing on Monday: “Their disbelief doesn’t mean there’s no threat … The threat is evident.” (LIVE UPDATES: Russia-Ukraine crisis)

Russia has ordered civilians to evacuate territory it controls on the western bank of the Dnipro River, where Ukrainian forces have been advancing since the start of this month shortly after Moscow claimed to have annexed the area.

A Russian defeat there would be one of Moscow’s biggest setbacks of the war. Kherson’s regional capital is the only big city Russia has captured intact since its invasion in February, and its only foothold on the west bank of the Dnipro, which bisects Ukraine. The province controls the gateway to Crimea, the peninsula Russia seized and claimed to annex in 2014.

The Russian-installed authorities in Kherson announced on Monday that men who stay behind would have the option of joining a military self-defense unit. Kyiv accuses Russia of press-ganging men in occupied areas into military formations, a war crime under the Geneva Conventions.

Kyrylo Budanov, Ukraine’s military spy chief, said Russian forces were preparing to defend Kherson city, not retreat from it, and reported evacuations were part of a Russian information campaign. While Russia is moving financial structures, equipment, vulnerable residents and wounded people from Kherson, he said, it is also reinforcing defenses.

“They are creating the illusion that all is lost. Yet at the same time they are moving new military units in and preparing to defend the streets of Kherson,” he told the Ukrainska Pravda online media outlet.

Since Russia’s forces suffered major battlefield defeats in September, President Vladimir Putin has escalated the war, calling up hundreds of thousands of reservists, announcing the annexation of occupied territory and repeatedly threatening to use nuclear weapons to defend Russian land.

This month, Russia has started a new campaign using long-range cruise missiles and Iranian-made drones to attack Ukraine’s energy infrastructure ahead of winter.

Russian state television is filled with talk shows featuring pundits who are openly cheering attacks on Ukrainian civil infrastructure and call for ever tougher measures to eliminate what they describe as an illegitimate Ukrainian state.

On Monday, Russian state TV presenter Anton Krasovsky apologized for remarks in which he called for Ukrainian children to be drowned in rivers and burned alive in huts with the doors nailed shut. He also joked that Ukrainian grandmothers were saving their funeral funds to pay Russian soldiers to rape them.

“Well, it happens: you’re on air, you get carried away. And you can’t stop,” Krasovsky said, adding he was “really embarrassed.”

Krasovsky was suspended from Russia’s state-funded international channel RT, and Russia’s Investigative Committee said it had ordered a report into his “sharp comments.”

Ukrainian Foreign Minister Dmytro Kuleba said Krasovsky would be prosecuted some day for promoting genocide, and called on countries to ban RT. – Rappler.com