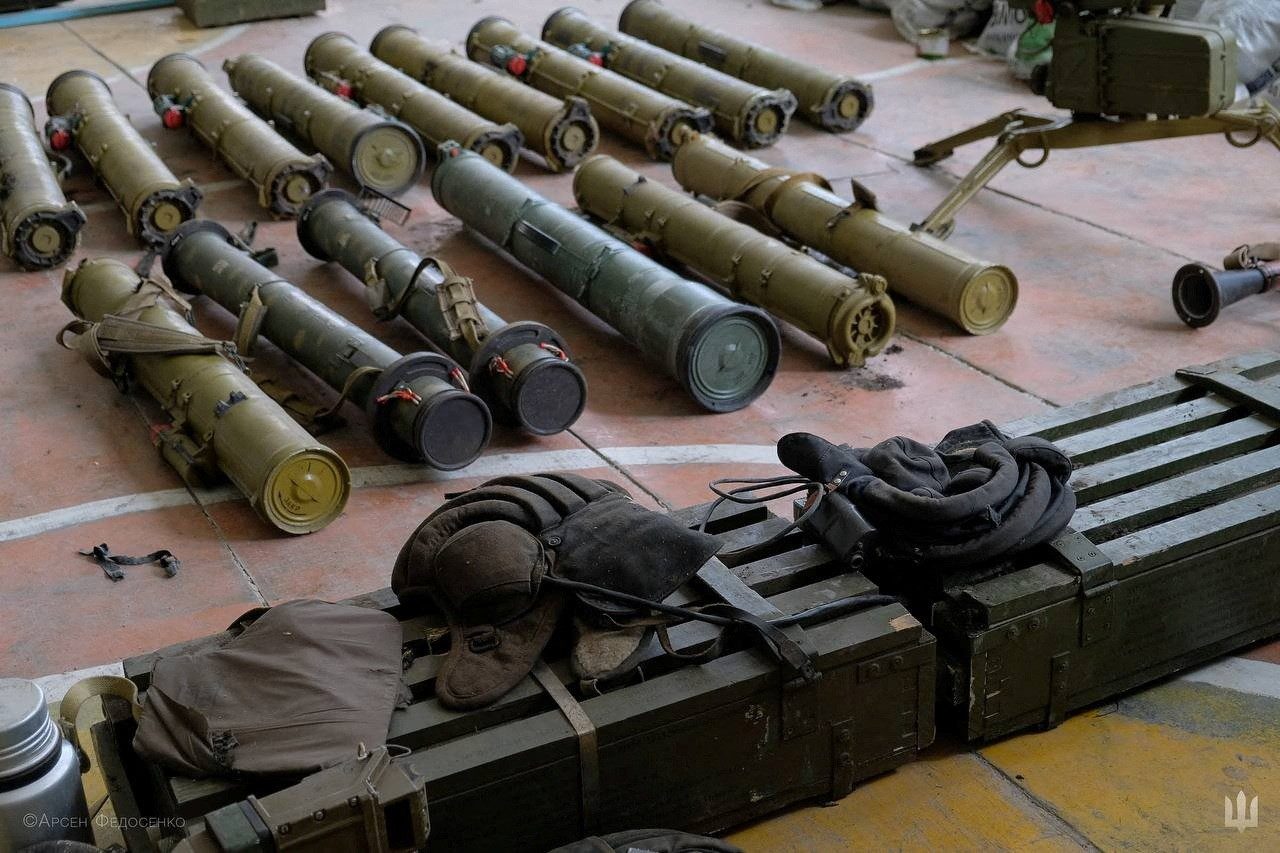 CAPTURED. A view shows Russian grenade launchers captured by the Ukrainian Armed Forces during a counteroffensive operation, amid Russia's attack on Ukraine, in Kharkiv region, Ukraine, in this handout picture released on September 11, 2022.

KYIV, Ukraine – Ukrainian forces kept pushing north in the Kharkiv region and advancing to the south and east of the country after the swift fall of Russia’s main bastion in the northeast, Ukraine’s army chief said on Sunday, September 11.

Ukrainian President Volodymyr Zelenskiy hailed Russia’s retreat from the city of Izium in the Kharkiv province as a breakthrough in the six-month-old war, saying this winter could bring more rapid gains of territory if Kyiv can get more powerful weapons.

“In the Kharkiv direction, we began to advance not only to the south and east, but also to the north. There are 50 km to go to the state border (with Russia),” Ukraine’s chief commander General Valeriy Zaluzhnyi said on Telegram.

He said the country’s armed forces have regained control of more than 3,000 square km (1,158 square miles) since the beginning of this month.

The retreat from the city of Izium marked Russian forces’ worst defeat since they were were pushed back from the capital Kyiv in March, as thousands of Russian soldiers left behind ammunition and equipment as they fled.

“I believe that this winter is a turning point, and it can lead to the rapid de-occupation of Ukraine,” Zelenskiy said in comments to a political forum published on his website late on Saturday. “We see how they (occupiers) are fleeing in some directions. If we were a little stronger with weapons, we would de-occupy faster.”

Ukrainian officials stopped short of confirming they had recaptured Izium, but Zelenskiy’s chief of staff Andriy Yermak posted a photo of troops on its outskirts and tweeted an emoji of grapes. The city’s name means “raisin.”

Kyiv-based military analyst Oleh Zhdanov said the gains could pave the way for a further push into Luhansk region, whose capture Russia claimed at the beginning of July.

“If you look at the map, it is logical to assume that the offensive will develop in the direction of Svatove – Starobelsk, and Sievierodonetsk – Lysychansk. These are two promising directions,” he said.

The gains are important politically for Zelenskiy as he seeks to keep Europe united behind Ukraine – supplying weapons and money – even as an energy crisis looms this winter following cuts in Russian gas supplies to European customers.

Britain’s defense ministry said in its daily intelligence update on Sunday that Ukrainian forces continued making gains in the Kharkiv region over the past 24 hours. However, fighting continued around Izium and the city of Kupiansk, the sole railway hub supplying Russia’s front line across northeastern Ukraine, also recaptured by Ukrainian forces.

As the war entered its 200th day, Ukraine’s military reported more Russian missile and air strikes on its targets overnight and regional officials reported heavy Russian shelling in the east and south.

While fighting raged on, conditions at Europe’s biggest nuclear power plant continued to be the source of grave international concern.

State agency Energoatom said it had fully halted operations at the Russian-held Zaporizhzhia plant as a restored line to the grid allowed the plant to be powered by Ukraine’s energy system. But it warned the risk of further damage to the line from what Ukraine says is Russian shelling “remains high.”

That would force the plant to switch to diesel generators, “the duration of which is limited by the technological resource and the amount of available diesel fuel,” it said.

The continent’s energy crisis this winter threatens to erode European unity on Ukraine, and Kyiv badly needs to show that not only it can hold out against Moscow’s assault but also sway the war’s momentum in its favor.

Zelenskiy told a conference attended by Germany’s foreign minister on Saturday that Russia was doing “everything” to break Ukrainian and European resolve this winter.

Russian forces used Izium as the logistics base for one of their main campaigns – a months-long assault from the north on the adjacent Donbas region, comprising Donetsk and Luhansk.

The head of Russia’s administration in Kharkiv told residents to evacuate the province and flee to Russia to “save lives,” TASS reported. Witnesses described traffic jams of cars with people leaving Russian-held territory.

If the reported gains are held, it would be a serious blow for Russia, which Western intelligence services say has suffered huge casualties. It would be a big boost for Ukraine, which is keen to show Western nations supplying it with weapons it deserves their continued support. – Rappler.com