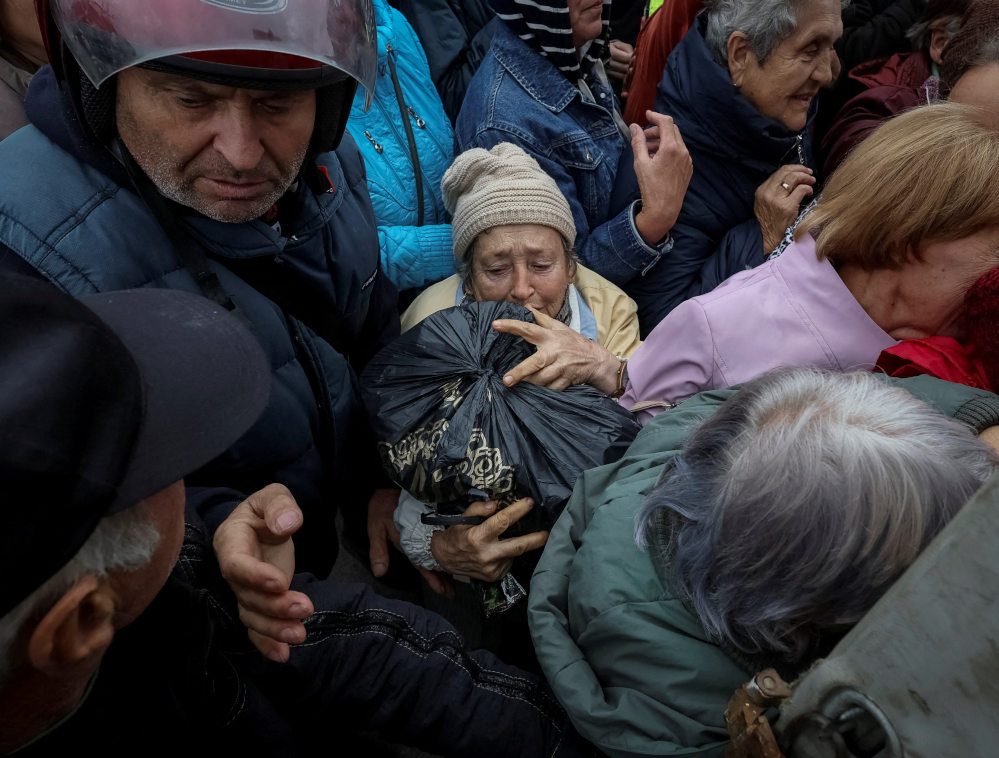 HUMANITARIAN AID. A local resident carries away a bag from a car distributing humanitarian aid, as Russia's attack on Ukraine continues, in the town of Balakliia, recently liberated by Ukrainian Armed Forces, in Kharkiv region, Ukraine on September 13, 2022.

IZIUM, Ukraine – President Volodymyr Zelenskiy promised he would lead Ukraine to victory in its war against Russia as he visited shrapnel-blasted, recently recaptured towns on Wednesday, September 14, but pro-Russian officials said they had halted Kyiv’s forces for now.

Russian forces suffered a stunning reversal this month after Ukrainian troops made a rapid armored thrust with special forces in the northeastern region of Kharkiv, forcing a sometimes rushed and chaotic Russian withdrawal.

Zelenskiy on Wednesday made a surprise visit to the town of Izium, around 15 km (9.3 miles) from the current frontline in the east. He thanked his soldiers for liberating the town, an important logistics hub, whose buildings and people now bear the scars of war

“Our blue-yellow flag is already flying in de-occupied Izium. And it will be so in every Ukrainian city and village,” Zelenskiy said in a social media post coinciding with the visit.

“We are moving in only one direction – forward and towards victory.”

Earlier on Wednesday, an emotional-looking Zelenskiy handed out medals to soldiers who had taken part in the operation to free the area in Balakliia, another town retaken in recent days where citizens and local police told reporters civilians were killed during months of Russian occupation.

The president says his army had liberated around 8,000 square km (3,100 square miles) of territory so far this month, a swath of land nearly equivalent to the island of Cyprus.

Reuters was not able to immediately verify the full scope of battlefield successes claimed by Ukraine.

Oleksiy Arestovych, an adviser to Zelenskiy, said Ukrainian troops were now trying to retake the Russian-held town of Lyman in Ukraine’s Donetsk region and were eyeing territorial gains in the neighboring Luhansk region which is under Russian control.

“There is now an assault on Lyman,” Arestovych said in a video posted on YouTube.

“And that is what they fear most – that we take Lyman and then advance on Lysychansk and Sievierodonetsk,” he said, referring to twin cities in the Luhansk region taken by Russia after fierce fighting in June and July.

Denis Pushilin, head of the Russia-backed self-proclaimed Donetsk People’s Republic, said troops loyal to Moscow had successfully pushed back Ukrainian forces trying to make inroads into Lyman, and to the north and south of the town.

“Nothing worked out for the enemy,” said Pushilin.

Asked whether Ukraine’s lightning counter offensive in the east was a turning point in the war, US President Joe Biden said it was hard to tell.

“It’s clear the Ukrainians have made significant progress. But I think it’s going to be a long haul,” said Biden.

Russian forces still control about a fifth of the country in the south and east, even though Kyiv is now on the offensive in both areas.

The White House, which has provided billions of dollars of weapons and support to Ukraine, has said the United States is likely to announce a new military aid package in the “coming days”.

In recaptured Izium, Zelenskiy watched as the Ukrainian flag was raised in front of the charred city council building.

On the main thoroughfare, no buildings were left unscathed: a derelict bath house had a hole blasted in its side; meat shops, pharmacies, a shoe shop and a beauty salon were sprayed with shrapnel.

“The view is shocking, but it is not shocking for me because we… saw the same pictures from Bucha, from the first de-occupied territories. The same destroyed buildings, killed people.”

After a Russian retreat earlier in the war, dead civilians were found in the town of Bucha, near Kyiv.

On the road into Izium, bus stops were daubed with “Z” markings, the symbol Russian forces use to identify themselves, and the charred remains of tanks and armored personnel carriers lay by the road side.

With a pink hood wrapped around her face for warmth, Liubov Sinna, 74, said residents were still fearful.

“We waited a long time for our guys. Of course we feel positive. Joy. But there is also fear – fear that the Russians could return here,” she said.

“Because we lived through this whole six months. We sat it out in cellars. We went through everything it is possible to go through. We absolutely cannot say that we feel safe.”

There was no gas, electricity, or water supply in the town, she added, saying she was unsure how people would get through winter.

In a move that suggests Russian President Vladimir Putin had wider war aims when he ordered troops into Ukraine on February 24, three people close to the Russian leadership told Reuters that Putin had rejected a provisional deal with Kyiv around the time the war began.

They said the deal would have satisfied Russia’s demand that Ukraine stay out of NATO. The Kremlin said the Reuters report had “absolutely no relation to reality.” It also said Ukraine’s ongoing ambitions to join the Western NATO military alliance still presented a threat to Russia.

On top of its reversals in Ukraine, Russian authorities are also facing challenges in other former Soviet republics with deadly fighting between Azerbaijan and Armenia and border guard clashes between Kyrgyzstan and Tajikistan.

The situation in the former Soviet states will be the backdrop at a summit in Uzbekistan this week where Putin will meet Chinese leader Xi Jinping and discuss the war in Ukraine. – Rappler.com