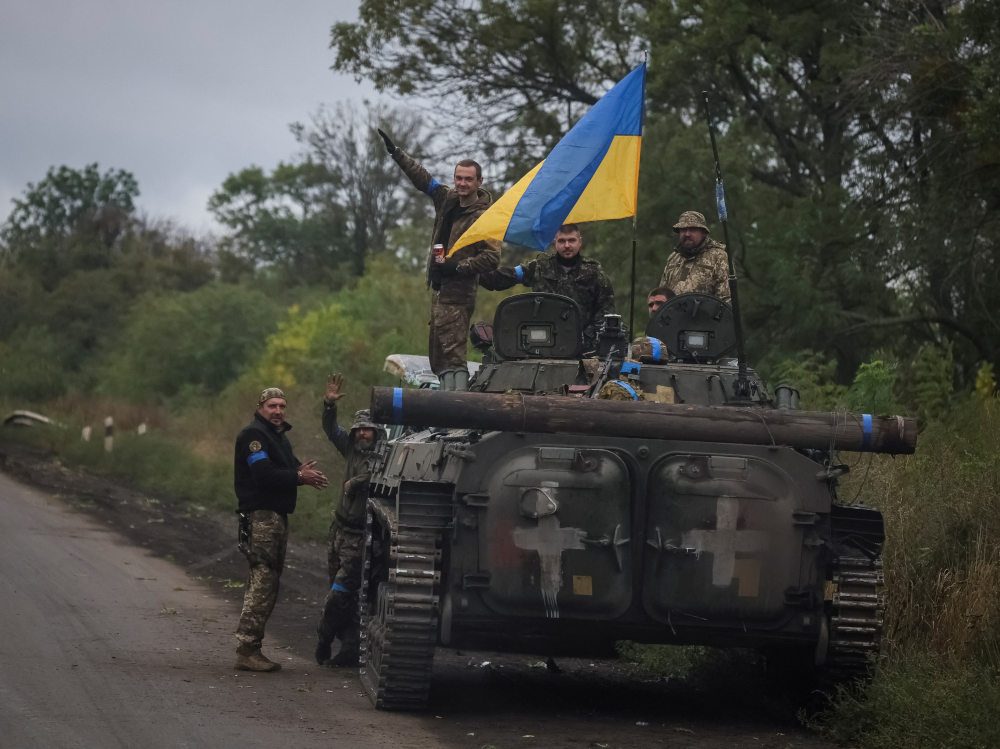 IN IZIUM. Ukrainian service members stand on a BMP-1 infantry fighting vehicle, amid Russia's attack on Ukraine, near the town of Izium, recently liberated by Ukrainian Armed Forces, in Kharkiv region, Ukraine on September 14, 2022.

Facebook Twitter Copy URL
Copied
The missile strikes hit the Karachunov reservoir dam, Zelenskiy says. The water system had no military value and hundreds of thousands of civilians depend on it daily.

Kryvyi Rih, the largest city in central Ukraine with an estimated pre-war population of 650,000, was targeted by eight cruise missiles on Wednesday, September 14, officials said.

“The water pumping station was destroyed. The river broke through the dam and overflowed its banks. Residential buildings are just a few meters away from the river,” Ukrainian legislator Inna Sovsun said on Twitter.

The missile strikes hit the Karachunov reservoir dam, Zelenskiy said in a video address released early on Thursday. The water system had no military value and hundreds of thousands of civilians depend on it daily, he said.

The video was released after Zelenskiy’s return to Kyiv from the Kharkiv region and following word from his office that his car had collided with a private vehicle in the capital.

“The president was examined by a doctor, no serious injuries were found,” presidential spokesman Serhii Nykyforov said in a Facebook post early on Thursday.

Zelenskiy on Wednesday made a surprise visit to Izium – until four days ago Russia’s main bastion and logistics hub in the region – where he watched as the blue and yellow Ukrainian flag was raised in front of the charred city council building.

“Our law enforcers are already receiving evidence of murder, torture, and abductions of people by the occupiers,” Zelenskiy said in his address.

Russia denies deliberately targeting civilians, and Reuters could not immediately verify the claims.

On the main thoroughfare, no buildings were left unscathed: A derelict bath house had a hole blasted in its side; meat shops, pharmacies, a shoe shop and a beauty salon had been sprayed with shrapnel.

Zelenskiy handed out medals to soldiers who freed the Balakliia area, another town retaken in recent days. Citizens and police told reporters civilians were killed during months of Russian occupation.

Foreign Minister Dmytro Kuleba also wrote on Twitter about the attacks on Kryvyi Rih: “Beaten by Ukrainian army on the battlefield, Russian cowards are now at war with our critical infrastructure and civilians. Russia is a terrorist state and must be recognized as such.”

In that vein, US senators from both Democratic and Republican parties introduced legislation that would designate Russia as a state sponsor of terrorism. The measure is opposed by President Joe Biden’s administration.

Zelenskiy was scheduled to speak to the United Nations General Assembly on September 21, and the assembly was due to consider on Friday a proposal for him to address the annual gathering of world leaders in a recorded video. Russia is opposed to Zelenskiy speaking.

UN Secretary-General Antonio Guterres said after talking to Russian President Vladimir Putin that he was hopeful a UN-brokered deal on Ukrainian Black Sea grain exports would be expanded to include Russian ammonia, a main ingredient in nitrate fertilizer. Shortages of fertilizer are contributing to a global food crisis.

Also on the diplomatic front, Putin and China’s President Xi Jinping will discuss Ukraine and Taiwan at a meeting in Uzbekistan on Thursday which the Kremlin said would hold “special significance” given the geopolitical situation.

Western politicians and military officials have said it was too early to tell whether Ukraine’s September success marked a turning point in the war because Russia had yet to fully respond.

“We should avoid euphoria. There is still a lot of work to be done to liberate our lands, and Russia has a large number of weapons,” Oleksiy Danilov, secretary of the national security and defense council, said in an online post.

On the road into Izium, bus stops were daubed with “Z” markings, the symbol Russian forces use to identify themselves, and the charred remains of tanks and armored personnel carriers lay by the roadside.

With a pink hood wrapped around her face for warmth, Liubov Sinna, 74, said residents were still fearful.

“Because we lived through this whole six months. We sat it out in cellars. We went through everything it is possible to go through. We absolutely cannot say that we feel safe,” she said.

A day after speaking by phone for 90 minutes to Vladimir Putin, German Chancellor Olaf Scholz said the Russian president “unfortunately” still did not think his invasion was a mistake. Putin says he wants to ensure Russian security and protect Russian-speakers in Ukraine. Ukraine and the West accuse Russia of an unprovoked war of aggression.

In a move that suggests Putin had wider war aims when he ordered troops into Ukraine on February 24, three people close to the Russian leadership told Reuters that Putin had rejected a provisional deal with Kyiv around the time the war began.

They said the deal would have satisfied Russia’s demand that Ukraine stay out of the US-led Western military alliance NATO. The Kremlin said the Reuters report had “absolutely no relation to reality.” It also said Ukraine’s ambitions to join NATO still presented a threat to Russia. – Rappler.com