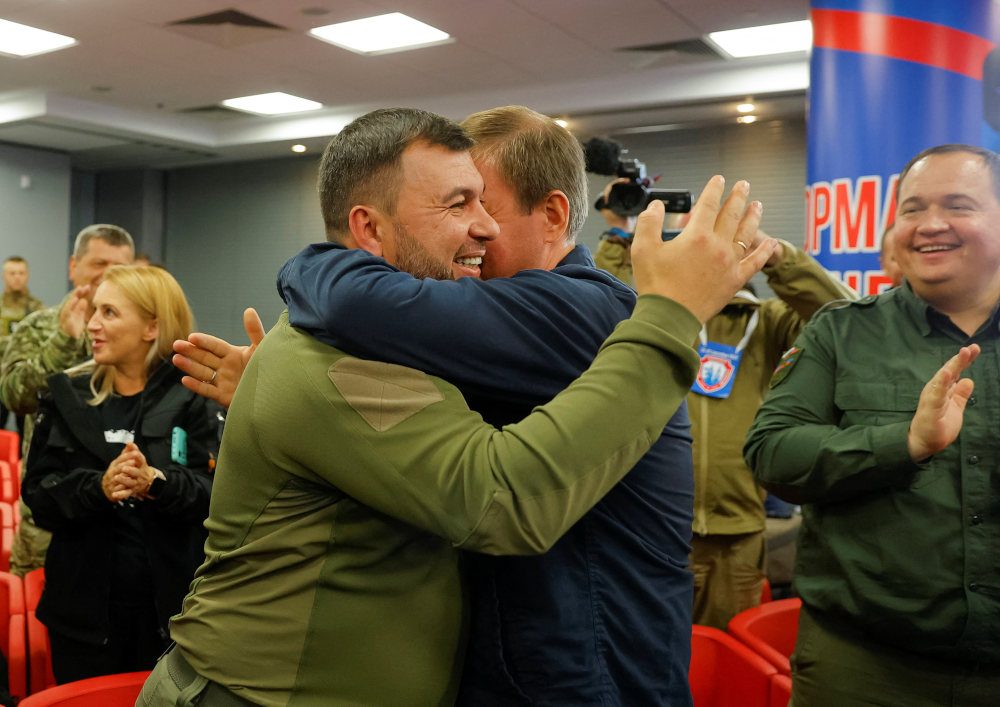 REFERENDUM. Head of the separatist self-proclaimed Donetsk People's Republic Denis Pushilin and Secretary of the United Russia Party's General Council Andrey Turchak react at a news conference on preliminary results of a referendum on the joining of the self-proclaimed Donetsk People's Republic to Russia, in Donetsk, Ukraine on September 27, 2022.

ZAPORIZHZHIA, Ukraine – Moscow was poised on Wednesday, September 28, to annex a swath of Ukraine, releasing what it called vote tallies showing support in four partially occupied provinces to join Russia, after what Kyiv and the West denounced as illegal sham referendums held at gunpoint.

On Moscow’s Red Square, a tribune with giant video screens has been set up, with billboards proclaiming “Donetsk, Luhansk, Zaporizhzhia, Kherson – Russia!”

President Vladimir Putin could proclaim the annexation in a speech within days, just over a week since he endorsed the referendums, ordered a military mobilization at home and threatened to defend Russia with nuclear weapons if necessary.

The Russian-installed administrations of the four Ukrainian provinces on Wednesday formally asked Putin to incorporate them into Russia, which Russian officials have suggested is a formality.

“The results are clear. Welcome home, to Russia!,” Dmitry Medvedev, a former president who serves as deputy chairman of Russia’s Security Council, said on Telegram, after the release of the results.

Russian-backed authorities claim to have carried out the referendums over five days on territory that makes up around 15% of Ukraine.

Residents who escaped to Ukrainian-held territory in recent days have told of people being forced to tick ballots in the street by roving officials at gunpoint. Footage filmed during the exercise showed Russian-installed officials taking ballot boxes from house to house with armed men in tow.

“This farce in the occupied territories cannot even be called an imitation of a referendum,” Ukrainian President Volodymyr Zelenskiy said in video address overnight.

Mykhailo Podolyak, an adviser to Zelenskiy, told Reuters that Ukrainians who helped organize the exercise would face treason charges and at least five years in jail. Ukrainians who were forced to vote would not be punished.

Denis Pushilin, the Russian-installed leader in Donetsk, one of two Ukrainian regions Moscow had previously proclaimed independent states, said he was on his way to Moscow to complete
the legal process of joining Russia.

“Now we are moving to a new stage of military action,” he said, amid speculation that Putin is set to change the status of what he has so far called a “special military operation” to a counter-terrorism operation.

Kremlin spokesman Dmitry Peskov said Russia would need to keep fighting until it had taken control of all of Donetsk. Around 40% of the province is still under Ukrainian control and scene of some of the war’s heaviest fighting.

The Russian annexation plan gathered pace as leaking gas bubbled up in the Baltic Sea for a second day after suspected explosions tore through undersea Russian pipelines on Tuesday. The Nord Stream 1 pipeline, once the main route for Russian gas to Germany, was already shut but cannot now be easily reopened.

NATO and the European Union warned of the need to protect critical infrastructure from what they called “sabotage”, though officials stopped short of saying who they blamed. The Kremlin said any theory that might point the finger at Russia for blowing up its own pipelines would be “stupid”.

The United States is preparing a new round of sanctions to punish Russia for the annexation move and a $1.1 billion arms package for Ukraine that will be announced soon, US officials said.

The head of Russia’s upper house of parliament has said the chamber could approve the regions’ accession as soon as October 4.

The annexation is part of a huge escalation strategy announced by Putin last week, along with the swift call-up of hundreds of thousands of Russian men to fight, and a new warning on nuclear weapons, which he said was “not a bluff”.

His action followed a stunning setback at the front, when Russian forces hastily abandoned territory the size of Cyprus in a matter of days.

Russian officials have said any attack on annexed territory would be an attack on Russia itself.

Russia’s planned annexation of Ukrainian territory has been rejected globally, with even traditional allies of Moscow such as Serbia and Kazakhstan saying they will not recognize it.

Turkish President Tayyip Erdogan, who has been offering his services as a mediator, told Zelenskiy by phone that what he called the “unilateral” referendums would make the revival of moribund diplomatic efforts more difficult.

In the Ukrainian-held city of Zaporizhzhia, Ukrainians who had managed to flee Russian-occupied territory through the last frontline checkpoint said they had seen no real voting.

“It’s funny. Nobody voted, yet the results are in,” laughed Lyubomir Boyko, 43, originally from Golo Pristan, a village in Russian-occupied Kherson province, as he waited with his family on Wednesday outside a UN aid office at a refugee reception center.

“They can announce anything they want. Nobody voted in the referendum except a few people who switched sides. They went from house to house, but nobody came out,” said Boyko.

Residents said many were fleeing for fear that Moscow will immediately start press-ganging men to fight in its forces, once it declares the territory to be Russia. For now, Russian officials at the checkpoint were letting some people leave.

“The line of vehicles was so long you could not see the end of it,” said Andriy, 37, an agricultural worker from Beryslav in Kherson province who declined to give his last name, describing the checkpoint.

Entire villages had emptied, he said, standing by the yellow, mud-spattered minibus in which he arrived with his wife, two children and parents.

“Seventy percent of people are leaving because of the referendum. There was no light, no gas, and no work, and all of a sudden, you get the referendum. It’s complete nonsense. I don’t know a single person among those I know who voted.” – Rappler.com