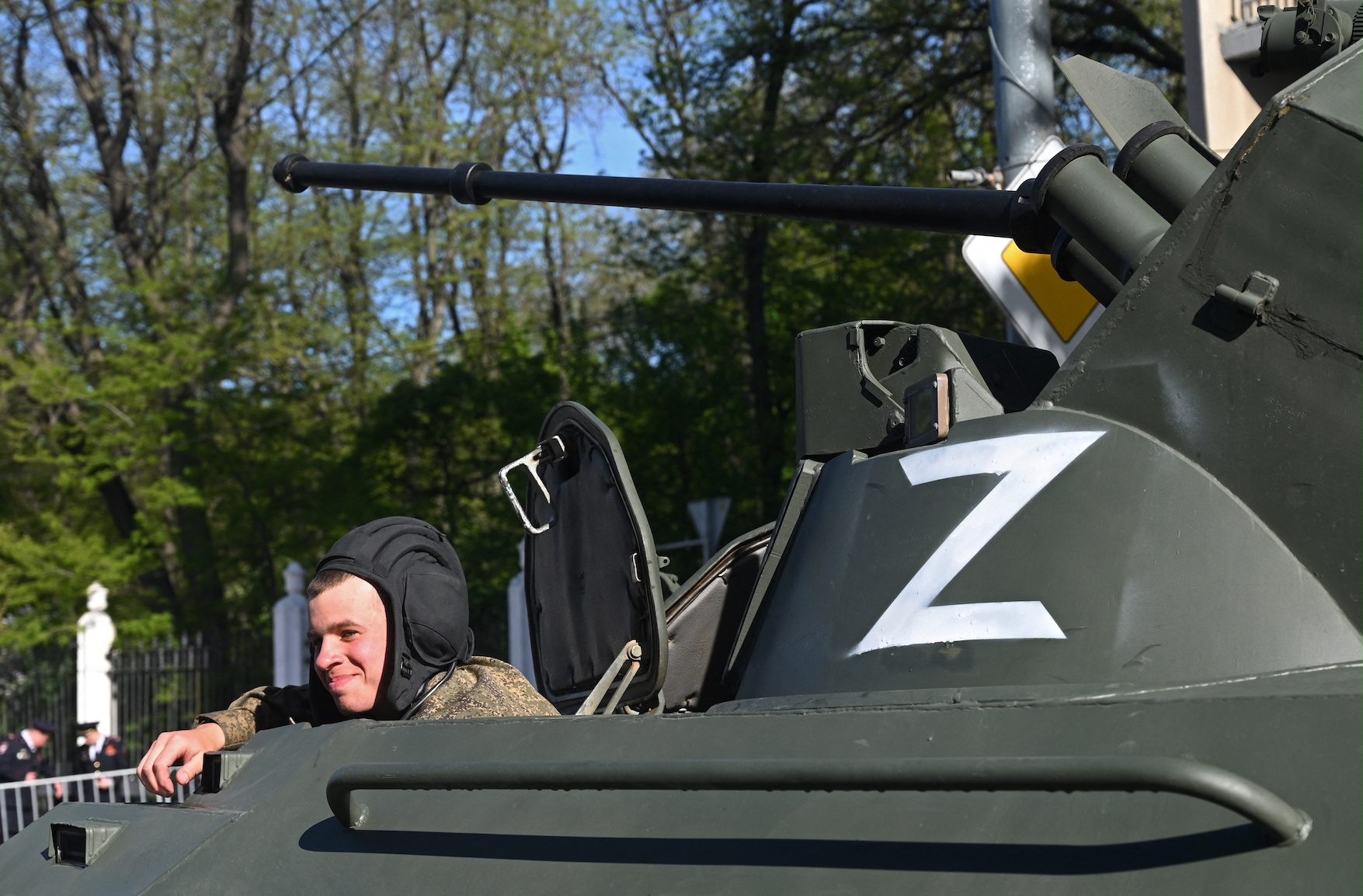 A Russian service member looks out of a combat vehicle with the symbol "Z" on its side, painted in support of Russia's armed forces involved in a conflict in Ukraine, before a military parade on Victory Day, which marks the 77th anniversary of the victory over Nazi Germany in World War Two, in Rostov-on-Don, Russia May 9, 2022. REUTERS/Sergey Pivovarov

Facebook Twitter Copy URL
Copied
Asked if such weapons are being used in Ukraine, Yury Borisov, Russian deputy prime minister in charge of military development, says: 'Yes. The first prototypes are already being used there.' He says the weapon was called 'Zadira.'

LONDON, UK – Russia on Wednesday, May 18, said it was using a new generation of powerful laser weapons in Ukraine to burn up drones, deploying some of Moscow’s secret weapons to counter a flood of Western arms supplied to its former Soviet neighbor.

Little is known about the specifics of the new laser weapons. Putin mentioned one called Peresvet, named after a medieval Orthodox warrior monk Alexander Peresvet who perished in mortal combat.

Yury Borisov, the deputy prime minister in charge of military development, told a conference in Moscow that Peresvet was already being widely deployed and it could blind satellites up to 1,500 km above Earth.

He said, though, that there were already more powerful Russian systems than Peresvet that could burn up drones and other equipment. Borisov cited a test on Tuesday which he said had burned up a drone 5 km away within five seconds.

“If Peresvet blinds, then the new generation of laser weapons lead to the physical destruction of the target – thermal destruction, they burn up,” Borisov told Russian state television.

Asked if such weapons were being used in Ukraine, Borisov said: “Yes. The first prototypes are already being used there.” He said the weapon was called “Zadira”.

Almost nothing is publicly known about Zadira but in 2017 Russian media said Russia’s state nuclear corporation, Rosatom, helped develop it as part of a program to create weapons-based new physical principles, known by the Russian acronym ONFP.

Putin’s February 24 invasion of Ukraine has illustrated the limits of Russia’s post-Soviet conventional armed forces, though he says the “special military operation” is going to plan and will achieve all of Moscow’s aims.

The United States has ruled out sending its own or NATO forces to Ukraine but Washington and its allies have supplied billions of dollars of weapons to Kyiv such as drones, Howitzer heavy artillery, anti-aircraft Stinger and anti-tank Javelin missiles.

Putin casts such large arms shipments as part of a broader plan by the United States to destroy Russia – and has promised that it will never succeed.

Borisov’s remarks indicate that Russia has made significant progress with laser weapons, a trend of considerable interest to other nuclear powers such as the United States and China.

Using lasers to blind satellites – or even burn them up – was once a fantasy from the realm of science fiction, but major powers such as the United States, China and Russia have been working on variants of such weapons for years.

Besides the benefits in conventional warfare of burning up drones, blinding reconnaissance systems has a strategic impact too as satellites are used to monitor intercontinental ballistic missiles which carry nuclear weapons.

Borisov said he had just returned from Sarov, a closed town in the Nizhny Novgorod region once known as Arzamas-16 because it was so secret, which is a center of Russia’s nuclear weapons
research.

“This is not some sort of exotic idea; it is the reality,” Borisov said. – Rappler.com