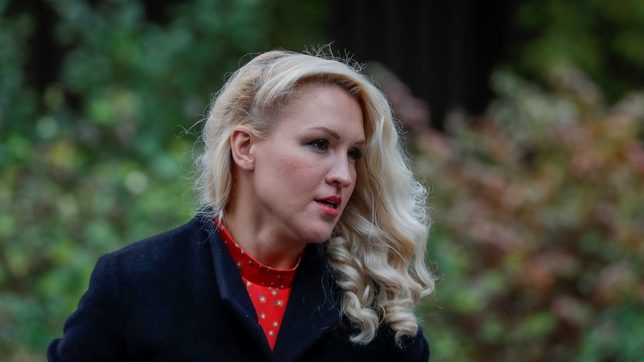 NAVALNY ALLY. Anastasia Vasilyeva, the head of Russia's Alliance of Doctors union and a personal physician of jailed Kremlin critic Alexei Navalny, arrives at a court building before a hearing in Moscow, Russia, on September 22, 2021.

Facebook Twitter Copy URL
Copied
Anastasia Vasilyeva, head of the Doctors Alliance trade union, is convicted for urging people to join a protest earlier this year to demand the release of Navalny from prison

A Russian court on Thursday, October 14, imposed one year of restrictions on Anastasia Vasilyeva, a doctor who treated and supported Kremlin critic Alexei Navalny, after finding her guilty of breaching COVID-19 safety rules.

Vasilyeva, head of the Doctors Alliance trade union, was convicted for urging people to join a protest earlier this year to demand the release of Navalny, President Vladimir Putin’s most prominent domestic critic, from prison.

The authorities said her behavior at the time was irresponsible and illegal given a COVID-19-related ban on large public gatherings. Vasilyeva said her prosecution was politically-motivated.

The ruling bans her from traveling outside Moscow, from leaving her home at night or attending mass events and compels her to check in twice a month with a state supervisor, the court said in a statement.

The ruling does not prohibit her from using her mobile phone or the internet, a restriction she had faced while being prosecuted.

Vasilyeva treated Navalny in 2017 after he suffered a chemical burn to his right eye after being assaulted by pro-Kremlin activists. She also supported him publicly after his arrest earlier this year on parole violations he said were trumped up to thwart his political ambitions.

Her relationship with his team later soured after many of them fled into exile amid a broad crackdown.

Many of Navalny’s allies have been prosecuted on the same charge as Vasilyeva.

Navalny’s spokesperson Kira Yarmysh is among those convicted of the same offense. She flew to Finland in August after being sentenced.

Another ally, Lyubov Sobol, was found guilty of the same charge. She is also reported to have left the country in August. She and her allies have not commented on her whereabouts.

Other senior allies, such as Leonid Volkov and Ivan Zhdanov, are based abroad.

Russia declared Vasilyeva’s doctor’s union a “foreign agent” in March, a designation that subjects it to bureaucratic scrutiny and spot checks.

Navalny is serving 2-1/2 years in jail for parole violations in an embezzlement case he says was trumped up. – Rappler.com