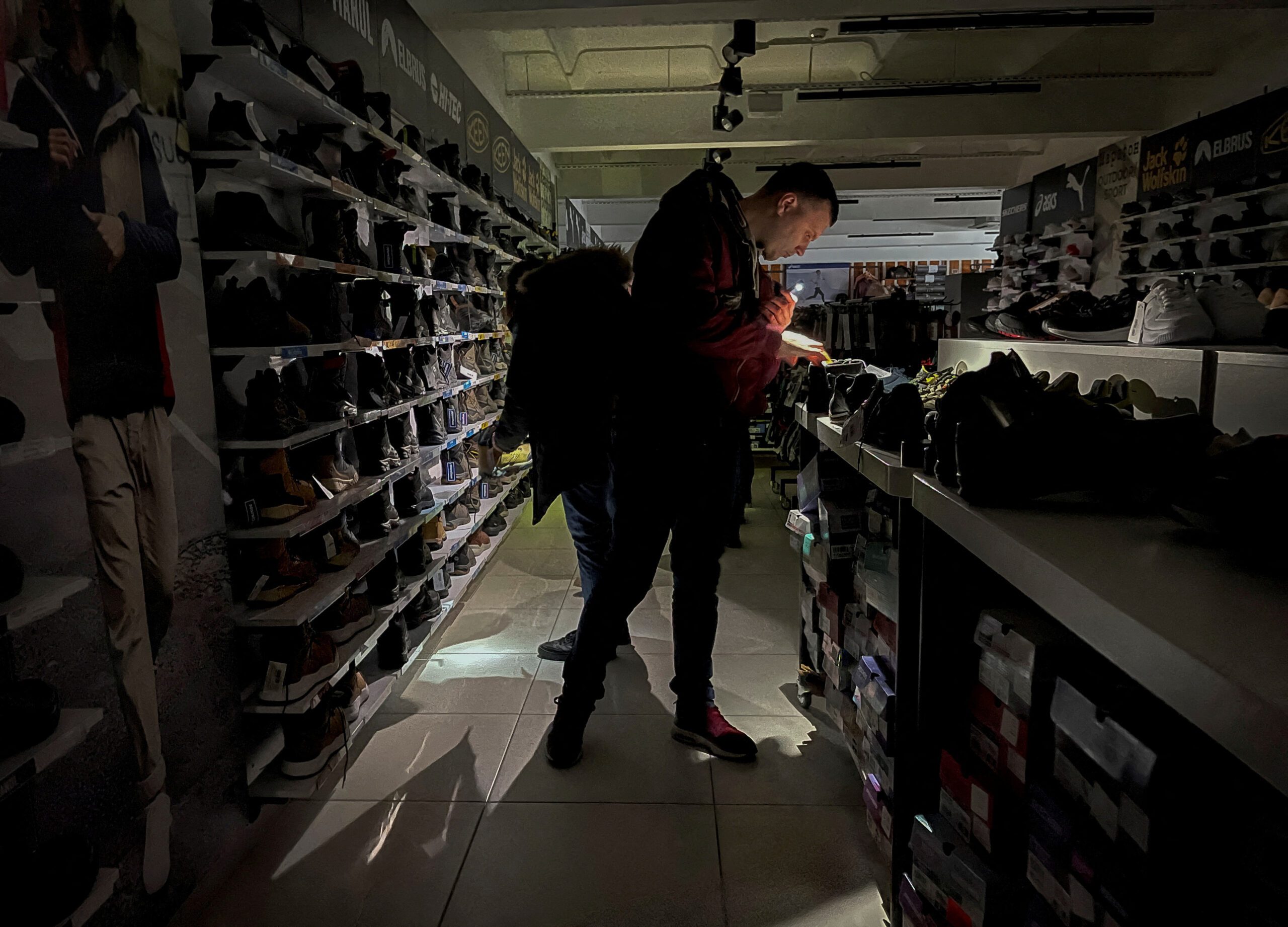 POWER OUTAGE. In this file photo, people use their mobile phone lamps to look at items at a sporting goods store during a power outage, after critical civil infrastructure was hit by a Russian missile attacks in Ukraine, as Russia's invasion of Ukraine continues, in Kyiv, November 26, 2022.

KYIV, Ukraine – Snow fell in Kyiv and temperatures hovered around freezing on Sunday as millions in and around the Ukrainian capital struggled with disruptions to electricity supply and central heating caused by waves of Russian air strikes.

The cold weather is gradually pushing up the energy needs of consumers even as repair workers race to fix wrecked power facilities, grid operator Ukrenergo said.

Electricity producers are still unable to resume full power supply after Russia’s missile attacks on Wednesday and have no choice but conserve energy by imposing blackouts, it said.

“The consumption restriction regime is still in place due to a capacity deficit, which currently stands at around 20%,” Ukrenergo said on Telegram.

Moscow has targeted vital infrastructure in recent weeks through waves of air strikes that have sparked widespread power outages and killed civilians. Fresh strikes last Wednesday caused the worst damage so far in the nine-month conflict, leaving millions of people with no light, water, or heat even as temperatures fell below 0 Celsius (32 Fahrenheit).

David Arakhamiya, the head of President Volodymyr Zelenskiy’s party, predicted Russia would carry out new infrastructure attacks this coming week and said the week could be “really difficult.”

Zelenskiy said on Saturday evening that there were restrictions on the use of electricity in 14 out of Ukraine’s 27 regions. The restrictions affect more than 100,000 customers in each of the regions, he said. Affected regions included the capital Kyiv and the surrounding region.

“If consumption increases in the evening, the number of outages may increase,” Zelenskiy said in his nightly video address, reiterating an appeal to citizens to save power.

“This once again shows how important it is now to save power and consume it rationally.”

Weather forecasters expected continued snowfall in Kyiv, a city that had 2.8 million residents before the war, until midweek while temperatures are forecast to stay below freezing.

Four hours of power a day

Sergey Kovalenko, chief operating officer of YASNO, which provides energy to Kyiv, said on Saturday evening the situation in the city has improved but still remained “quite difficult.” He indicated that residents should have at least four hours of power per day.

“If you haven’t had at least four hours of electricity in the past day, write to DTEK Kyiv Electric Networks, colleagues will help you figure out what the problem is,” Kovalenko wrote on his Facebook page.

Ukrenergo said that blackouts will continue and urged limited use of power.

“We would like to remind you that now every Ukrainian whose home has had electricity restored can help restore it to others faster, simply by consuming electricity sparingly,” it said in a statement on Saturday the Telegram messaging app.

Russia has said since it launched the invasion of Ukraine on February 24 that it does not target the civilian population, while the Kremlin said on Thursday that Kyiv could “end the suffering” of its population by meeting Russia’s demands to resolve the conflict.

On Saturday, Ukraine accused the Kremlin of reviving the “genocidal” tactics of Josef Stalin as Kyiv commemorated a Soviet-era famine that killed millions of Ukrainians in the winter of 1932-33.

“Once they wanted to destroy us with hunger, now – with darkness and cold,” Zelenskiy wrote on Telegram. “We cannot be broken.” – Rappler.com