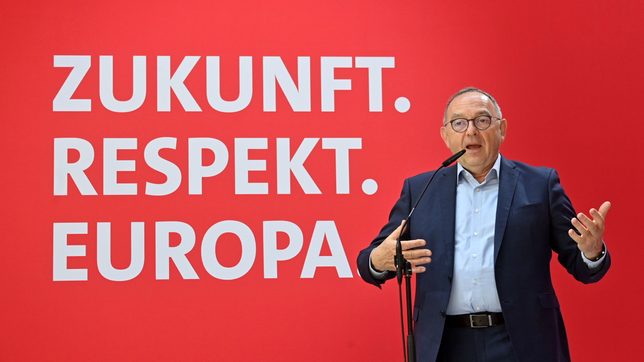 Facebook Twitter Copy URL
Copied
'The government should be in place by the end of the year. That is feasible,' says Social Democrats' Norbert Walter-Borjans

A three-way German government led by the Social Democrats (SPD) should be ready to take office by the end of the year, the co-leader of the centre-left party said in a newspaper interview published on Saturday, October 2.

Norbert Walter-Borjans said he was confident his party, which won Sunday’s national election by a narrow margin that left it seeking partners, could move swiftly to agree a coalition with the Greens and the business-friendly Free Democrats (FDP).

An SPD ruling alliance with the Greens and FDP – dubbed a “traffic light” coalition after their respective colors – would command a parliamentary majority.

“The government should be in place by the end of the year. That is feasible,” Walter-Borjans told the Welt am Sonntag.

“We don’t have to hold exploratory talks until we drop this time, because we want a traffic light (coalition) in which all three partners bring their strengths to bear,” he said.

“In that sense, we could start formal coalition negotiations in October and conclude them by December,” he added.

Greens co-leader Annalena Baerbock said her party was not yet committed to a specific coalition but its priorities were climate protection, and a liberal society with social cohesion. “That means entering talks with an open mind,” she told a party meeting.

Talks on forming a coalition government in Germany commonly take several weeks or months. After the last national election, on Sept. 24, 2017, such negotiations went on until the following March.

The SPD is due to hold exploratory talks with both the Greens and FDP on Sunday, October 3. The two smaller “kingmaker” parties met on Friday, October 1, for a second round of talks, which FDP leader Christian Lindner said were held in a “good atmosphere”.

The Greens and FDP, from opposite ends of the political spectrum and at odds on a range of issues, have moved centre stage after the SPD’s narrow election victory – its first since 2012.

Both the SPD and Chancellor Angela Merkel’s conservative bloc, which slumped to a record low result, are courting the smaller parties to get a parliamentary majority for a ruling coalition. Polls show voters would prefer the SPD to lead it.

Merkel, in power since 2005, plans to step down once a new government is formed and will stay on until that point. – Rappler.com