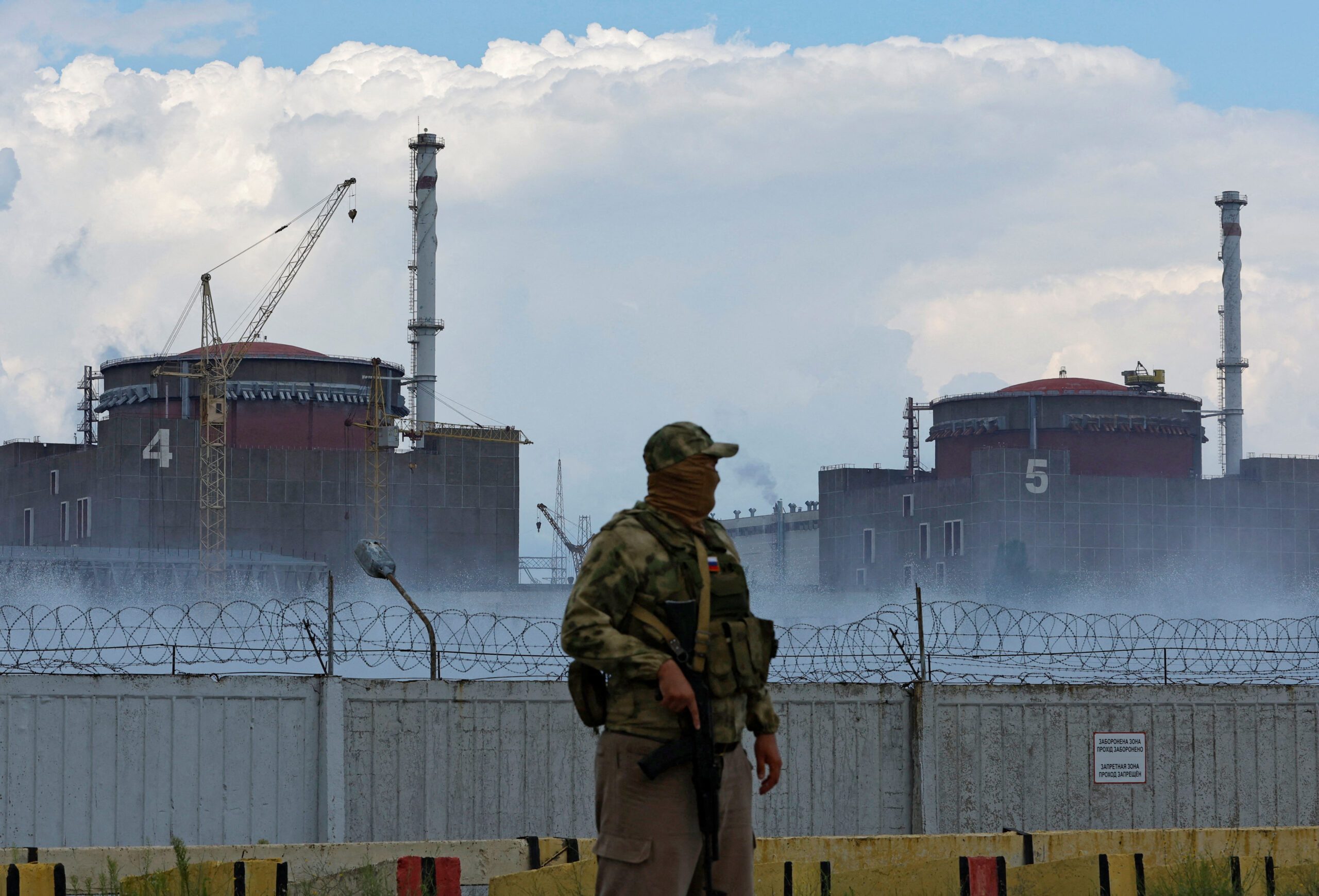 FILE PHOTO. A serviceman with a Russian flag on his uniform stands guard near the Zaporizhzhia Nuclear Power Plant in the course of Ukraine-Russia conflict outside the Russian-controlled city of Enerhodar in the Zaporizhzhia region, Ukraine August 4, 2022.

LONDON, United Kingdom – The Zaporizhzhia nuclear power plant in southern Ukraine has been shelled in recent days, opening up the possibility of a grave accident just 500 km (around 300 miles) from the site of the world’s worst nuclear accident, the 1986 Chornobyl disaster.

On Thursday, August 11, United Nations Secretary-General Antonio Guterres called on both Russia and Ukraine to halt all fighting near the plant after fresh shelling that day.

The Zaporizhzhia nuclear power plant has six Soviet-designed VVER-1000 V-320 water-cooled and water-moderated reactors containing Uranium 235, which has a half life of more than 700 million years.

It is Europe’s biggest nuclear power plant and one of the biggest in the world. Construction began in 1980 and its sixth reactor was connected to the grid in 1995.

As of July 22, just two of its reactors were operating, according to the Nuclear Energy Agency (NEA).

What are the risks to the reactors?

The biggest risk to the reactors is from a drop in water supply.

Pressurized water is used to transfer heat away from the reactor and to slow down neutrons to enable the Uranium 235 to continue its chain reaction.

If the water was cut, and auxiliary systems such as diesel generators failed to keep the reactor cool due to an attack, then the nuclear reaction would slow down though the reactor would heat up very swiftly.

At such high temperatures, hydrogen could be released from the zirconium cladding and the reactor could start to melt down.

However experts say the building housing the reactors are designed to contain radiation and withstand major impacts, meaning the risk of major leak there is still limited.

“I do not believe there would be a high probability of a breach of the containment building even if it was accidentally struck by an explosive shell and even less likely the reactor itself could be damaged by such. This means the radioactive material is well protected,” said Mark Wenman, Reader in Nuclear Materials at Nuclear Energy Futures, Imperial College London.

What about the spent fuel?

“The basins of spent fuel are just big pools with uranium fuel rods in them – they are really hot depending on how long they have been there,” said Kate Brown, an environmental historian at the Massachusetts Institute of Technology whose book “Manual for Survival” documents the full scale of the Chornobyl disaster.

“If fresh water is not put in then the water will evaporate. Once the water evaporates then the zirconium cladding will heat up and it can catch on fire and then we have a bad situation – a fire of irradiated uranium which is very like the Chornobyl situation releasing a whole complex of radioactive isotopes.”

An emission of hydrogen from a spent fuel pool caused an explosion at reactor 4 in Japan’s Fukushima nuclear disaster in 2011.

That is a total of more than 2,200 tons of nuclear material excluding the reactors, according to the document.

After invading Ukraine on February 24, Russian forces took control of the plant in early March.

Ukrainian staff continue to operate it, but special Russian military units guard the facility and Russian nuclear specialists give advice. The International Atomic Energy Authority (IAEA) has warned that the staff are operating under extremely stressful conditions.

If there was a nuclear accident, it is unclear who would deal with it during a war, said Brown.

“We don’t know what happens in a wartime situation when we have a nuclear emergency,” Brown said. “In 1986 everything was running as well as it ran in the Soviet Union so they could mobilize tens of thousands of people and equipment and emergency vehicles to the site.”

“Who would be taking charge of that operation right now?”

What has happened so far?

The plant was struck in March but there was no radiation leak and the reactors were intact. Both Russia and Ukraine blamed each other for that strike.

In July, Russia said Ukraine had repeatedly struck the territory of the plant with drones and missiles. Pro-Ukrainian social media said “kamikaze drones” had struck Russian forces near the plant.

Reuters was unable to immediately verify battlefield accounts of either side.

Russia said that Ukraine’s 45th Artillery Brigade also struck the territory of the plant with 152-mm shells from the opposite side of the Dnipro river. Ukraine’s state nuclear power company, Energoatom, said Russia fired at the plant with rocket-propelled grenades.