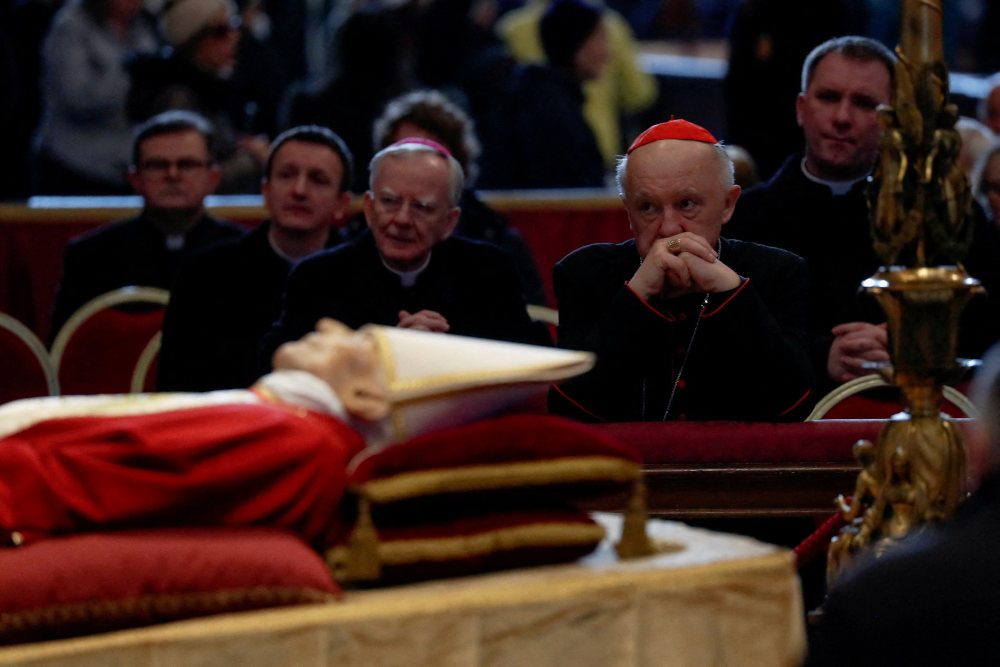 PAYING RESPECTS. Cardinal Kazimierz Nycz of Poland and Archbishop of Krakow Marek Jedraszewski pay homage to former Pope Benedict as his body lies in state at St. Peter's Basilica, at the Vatican, January 4, 2023.

Facebook Twitter Copy URL
Copied
In keeping with Benedict's wishes, the funeral ceremony will be simple, somber, and sober, the Vatican says

VATICAN CITY – Former pope Benedict, a hero to Roman Catholic conservatives who shocked the world by resigning nearly a decade ago, will be given a final farewell on Thursday at a funeral presided over by his successor.

Benedict died at 95 last Saturday in a monastery within the Vatican gardens where he moved after becoming the first pontiff in 600 years to stand down, opening the way for the election of Pope Francis, who has proved a more reformist, hands-on leader.

Tens of thousands of people are expected to attend Thursday’s funeral in front of the imposing St. Peter’s Basilica. In keeping with Benedict’s wishes, the ceremony will be simple, somber, and sober, the Vatican has said.

The lying-in-state ended on Wednesday evening and the body was put into a plain cypress wood coffin ready for the funeral. A one-page account of Benedict’s papacy, along with other items, including Vatican coins minted during his reign, were also tucked into the coffin.

After the ceremony, the coffin will be taken back inside the basilica and encased in zinc before being sealed in a second wooden casket.

Because Benedict was no longer a head of state when he died, only two countries, Italy and his native Germany, will send official delegations to the funeral. 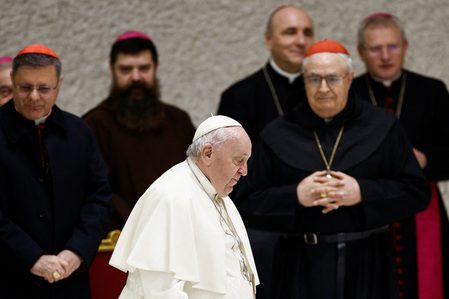 Others leaders, including the king and queen of Belgium and the queen of Spain, and about 13 heads of state of state or government, will attend in a private capacity. Most nations were being represented by their ambassadors to the Holy See.

It is a far cry from the last papal funeral in 2005, when dozens of kings, presidents and prime ministers joined more than a million people who flooded the streets around the Vatican to pay their respects to Benedict’s charismatic predecessor, John Paul II.

An intellectual theologian, Benedict was always likely to rule in the shadow of John Paul, who was credited with helping end the Cold War. But his time in charge was to a degree spent trying to overcome problems the Church had ignored or covered up in previous decades, including rampant sexual abuses by clerics.

Benedict himself acknowledged he was a weak administrator, and after eight years in the job he stunned the world’s 1.3 billion Catholics in 2013 by resigning, saying he was no longer strong enough to lead the Church due to his “advanced age”.

Even though he largely avoided public appearances in subsequent years, he remained a standard-bearer for Catholic conservatives, who felt alienated by reforms ushered in by Francis, including cracking down on the old Latin Mass.

Over the past three days almost 200,000 people have filed past Benedict’s body, dressed in a miter and red vestments, his hands wrapped in a rosary, which was placed on a bier in St. Peter’s Basilica without any papal regalia.

“He was a great pope, a marvelous pope. He was able to explain the scriptural matters of faith and also the traditional teachings of the Church,” said Father Callistus Kahale Kabindama, a priest from Zambia.

At his request, Benedict will be buried in the underground Vatican grottoes in the niche where first Pope John XXIII and then John Paul II were interred before their remains were transferred to more prominent places in the basilica above.

More than 1,000 Italian security personnel were called up to help safeguard the event and air space around the tiny Holy See has been closed off for the day. Italy ordered that flags around the country be hung at half staff.

“Much like John Paul II, Benedict was more concerned about the Church’s deteriorating image and financial flow to the hierarchy versus grasping the concept of true apologies followed by true amends to victims of abuse,” the anti-abuse group SNAP said. – Rappler.com