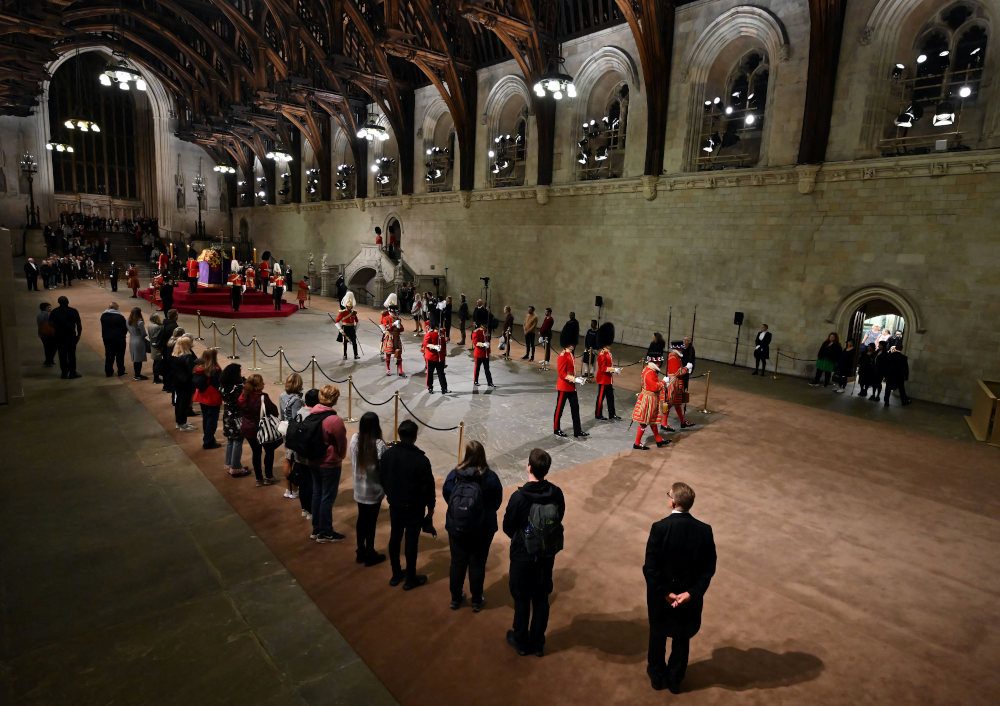 PAYING RESPECTS. The guard is changed while members of the public pay their respects as they pass the coffin of Queen Elizabeth II as it Lies in State inside Westminster Hall, at the Palace of Westminster in London on September 14, 2022.

Facebook Twitter Copy URL
Copied
Queen Elizabeth's coffin lies in the center of Westminster Hall on a purple catafalque placed on a red platform, with soldiers and beefeaters standing vigil

LONDON, United Kingdom – Mourners from all walks of life filed past the coffin of Queen Elizabeth through the night as she lay in state in London’s ancient Westminster Hall, paying their final respects to Britain’s longest-reigning monarch before her funeral on Monday, September 19.

After days of processions and ritual as the queen’s body was brought to London from Balmoral, Scotland, where she died last Thursday at the age of 96, this was the opportunity for ordinary people to take a direct part in a ceremony.

As King Charles returned to his Highgrove home in the southern English region of Gloucestershire after days of scheduled events, officials expected some 750,000 people to view his mother’s coffin before the lying in state ends at 6:30 am (0730 GMT) on Monday.

The line stretched back several miles along the south bank of the River Thames, past landmarks such as Tower Bridge and a replica of Shakespeare’s Globe Theatre, crossing Lambeth Bridge as it neared Westminster Hall. People waited many hours.

“You do it all because you want to pay respect to this lady … and I think when you put yourself through that, and then you get to the moment you’re waiting for you are just that little bit more emotional,” he said. “It’s a very powerful thing.”

Most were Britons but some were from overseas. They were young and old, and included former soldiers in military medals and babies being carried by their parents. Many stopped by the coffin to bow their head. Others wiped away tears.

Some were there to represent elderly parents, others to witness history and to thank a woman who, having ascended the throne in 1952, was still holding official government meetings just two days before she died.

Queen Elizabeth’s coffin lay in the center of Westminster Hall on a purple catafalque placed on a red platform. It was covered by the Royal Standard flag and topped with the Imperial State Crown placed on a cushion, alongside a wreath of flowers.

Among the first inside was Kenneth Taylor, 72, from Reading in central England, who had come with a neighbour and stayed overnight in a tent in the queue.

Tearing up, Taylor said that on seeing the queen lying in state, he felt sad. “A lump came to my throat.”

“You know, we’ve lost someone special. Her service to this country was really steadfast and unswerving. And she’s probably what I would call the queen of queens.”

The casket had been brought to the hall from Buckingham Palace atop a gun carriage and escorted by soldiers in scarlet ceremonial uniforms in a solemn procession on Wednesday afternoon.

King Charles, his sons Princes William and Harry and other senior royals walked behind – the two princes united in grief despite a rift between them. Harry marks his 38th birthday on Thursday.

William and his wife Kate will travel to the royal residence of Sandringham in eastern England on Thursday to view floral tributes left there by members of the public.

The full-scale ceremonial procession on the day of the queen’s funeral is likely to be one of the biggest the country has ever witnessed and will pose a huge security challenge.

Royalty, presidents and other world leaders are expected to attend, although certain nations, including Russia, Afghanistan, and Syria, were not extended invites.

French President Emmanuel Macron was the latest leader to say he would attend the funeral.

US President Joe Biden, who has also said he will be there, spoke to the new king on Wednesday and “conveyed the great admiration of the American people for the Queen,” the White House said.

The Times newspaper reported that British Prime Minister Liz Truss was expected to hold one-on-one talks with Biden and other world leaders on the sidelines of the funeral, but officials have said any such meetings will be informal. – Rappler.com