A woman stands by a lamp post as riot police move along a street during a rally of opposition supporters, who accuse strongman Alexander Lukashenko of falsifying the polls in the presidential election, in Minsk on August 10, 2020. - Belarus police on August 10 used rubber bullets and tear gas to break up fresh protests challenging the result of a controversial weekend presidential election, witnesses and reports said. (Photo by Sergei GAPON / AFP)

The 10 weeks leading up to the disputed re-election victory of Belarus President Alexander Lukashenko saw multiple arrests of political opponents, a female trio defying the strongman, and unprecedented street protests.

Here are the key dates:

On May 29, video blogger Sergei Tikhanovsky, who launched a campaign to unseat Lukashenko, is arrested. Jailed for disrupting public order, the 41-year-old entrepreneur who had become popular with his videos alleging government corruption is forced to drop out of the race. He then becomes the target of several criminal probes.

His wife Svetlana Tikhanovskaya, 37, picks up the torch and gets the 100,000 vote sponsors needed, a considerable number in this country of 9.5 million people.

On June 19, the electoral commission approves her candidacy.

Lukashenko, who has ruled Belarus with an iron fist since 1994, claims the country is not ready to vote for a woman. 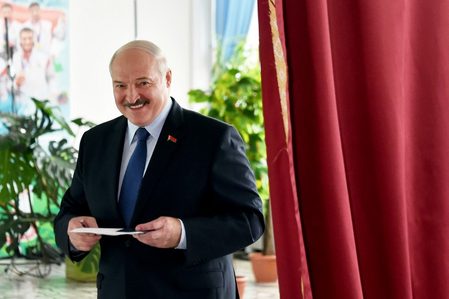 After Tikhanovsky, it’s the turn of Mikola Statkevich, a historic opposition figure, to be detained on May 31.

He spent 5 years in prison over a demonstration against the 2010 presidential election results and could not contest the current vote.

Then comes the June 18 arrest of Viktor Babaryko, a 56-year-old former banker accused of fraud and money laundering.

Some 140 people are arrested in the following days at opposition rallies throughout the country.

European Commission President Ursula von der Leyen calls for the immediate release of all those held arbitrarily. In 2016, the European Union lifted most of the sanctions it had imposed on Minsk since 2010, the year when the opposition suffered a particularly severe government crackdown.

On June 25, Lukashenko accuses both Russia and Poland of “interference” in the presidential campaign, denouncing “fakes” to discredit his rule. The Kremlin denies the charge.

On July 14, hundreds protest across the country after the electoral commission rejects Babaryko’s candidacy for president, with calls for Lukashenko to hand over power. More than 250 people are arrested.

The next day, the Organization for Security and Cooperation in Europe (OSCE), which has sent observers to Belarus since 2001, says it has not been invited to monitor the election.

On July 16, 3 opposition movements decide to join forces to confront Lukashenko, a first in the former Soviet republic.

Tikhanovskaya’s team announces she will work with those of Babaryko and ex-diplomat turned opposition activist Valery Tsepkalo.

The same day Tikhanovskaya appears in a photo beside both Maria Kolesnikova, who heads Babaryko’s campaign, and Tsepkalo’s wife Veronika.

Each one has her own signature gesture: Tikhanovskaya’s punched fist, Kolesnikova’s hands making a heart shape, and Tsepkalo’s victory sign.

The 3 symbols feature on the campaign’s key poster.

With tension rising in Minsk, Tsepkalo flees to Moscow with his children, citing security concerns, his spokesman announces on July 24.

His wife stays behind in Belarus to carry on with the campaign.

On July 29, Belarus announces the arrest of more than 30 Russian fighters from private military group Wagner, considered close to the Kremlin, accusing them of seeking to destabilize the run-up to the election.

Historic allies, Russia and Belarus have seen ties strained since late last year, with Lukashenko suspecting Russia of wanting to turn his country into a vassal state. The Kremlin denies this.

Despite pressure from the authorities, more than 60,000 of Tikhanovskaya’s supporters gather on July 30 in a Minsk park for the biggest opposition rally for at least a decade in Belarus.

“We want freedom!” shouted the stay-at-home mother who trained as an English teacher and who has become the face of the opposition. “Sveta! Sveta!” the crowds cheered.

On August 7, Tikhanovskaya alleges election fraud, telling AFP: “We’ve seen over the past couple of days how brazenly this election is being falsified.”

The next day, the head of her campaign is taken into custody after being arrested for the second time in 3 days.

After a violent crackdown on anti-government protests overnight Sunday, Lukashenko is declared the election winner with 80% of the vote. Germany expresses serious doubts about the result while the EU demands a precise ballot count.

Tikhanovskaya, with an official vote share of 10%, claims victory and calls on Lukashenko to step down. – Rappler.com